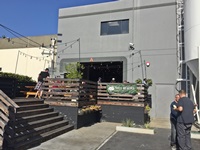 This is a neighborhood bar that’s also a brewery that serves really good beer. What stood out to me was the number of customers that knew each other (and actively interacted with each other), and that knew the wait staff.

Nice selection of styles, quick and friendly service. I’ll be back for sure.

Great brewery and a nice place to chill on a nice warm So cal afternoon. Nice range of beers from Light to dark, hoppy to toasty. Gets busy sometimes so get there earlier if going on weekend day!

Pretty good place to hang out specially on a Friday evening! It does tend to get a good crowd in which at times it is hard to find a table; patio makes it a perfect hang out spot during the Summer nights.

Three Weavers is located in a business park not too far from LAX.

At the entrance, you walk up a few wooden stairs to a nice outdoor patio area. Once inside, they have plenty of seating. Today, there was a beer bus, so the place was crowded (don't think this was their first stop). :) I'll return again some other time when it's quieter. It was a nicely done space. Plenty of parking.

They brew good solid beers, so this is a nice stop if you have time between flights.

Swung by in Cinco de Mayo. Tucked into an industrial strip that they're slowly taking over, the vibe was welcoming with seating outside and inside. Mexrrissey was playing, which was bad ass.

Twelve beers on tap, but I was all over Double-Sided Guadalupe (Kölsch loaded with lime). So damn delicious! And I was pleasantly surprised to hear that the base Kölsch (Seafarer) accounts for 40% of this production. Got to try a few other beers, too; El Ghostface (West Coast IPA with a chili pepper kick), Expatriate (IPA), Magnificent Voices (Gose), a kick-ass coffee beer and one or two more that I can't recall because I was having a good time.

Quality was high. Pours were on point. And the service was friendly and helpful.

Stoked that this is one of my local breweries now. I'll definitely be back.

Three Weavers is tucked in a warehouse like area....much like Solemn Oath in Illinois. Has outdoor seating and boardgames. Fairly busy on Tues evening. There were 12 beers to choose from and there could have been others but I stayed true to 3Weav. Service was helpful and had an enjoyable experience there.

Went 7/23/16, had a blast! The beers were fresh and great. The grapefruit Kolsch and the coffee porter were standouts for me. Also got a tulip glass for 5$, probably the best deal on nice glassware I have seen at a brewery; cool design too!

The tasting room/brewery has about a dozen in-house selections. Glad to see Inglewood have a brewery of its own and the location has close freeway access. The selections lean toward hops , but there are a few other styles as well stout, imperial porter, saison, etc). Interesting to note that Three Weavers doesn't have a barrel aging or sour program. Instead the Brewery's strength are IPAs, however their saison with hibiscus and kellerbier are tasty as well.

The brewery is in the same space as the tasting room. They have about 12 beers on tap at any given time. I got a flight and the beers seemed a bit warm all around. Service was good, especially when fixing a mistake I had in my flight. I would definitely recommend a stop in here, especially if it's before a show at The Forum.