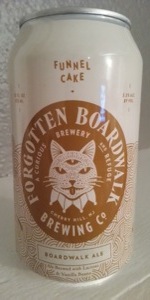 I've been spoiled by local Carton's Coffee Cream Ale series, but this Funnel Cake is fun and original, though to sweet with too many additives for me.
a) yellow color with short head. little last or lace develops.
s) mom's spice drawer with emphasis on baking: vanilla, sugar, pepper.
t) Follows that spicey direction but on a sweet cake like background.
f) I like the finish, as the over-sweet gets pulled back by the pepper in an original see-saw way.
o) Too much vanilla and sugar for more than a half beer for me

It seemed to be true to what it said it was. It just fell a little short. Maybe if there was more vanilla and malt it would have accomplished its goal

Poured into a nonic pint glass, the appearance was a ruddy burnt yellow to orange color with just a skim of head at the top. Dissipated super quick. No lace. The aroma was sweet corn, sweet biscuits, vanilla extract, lactose and a little bit of lemon sweetness. The flavor was super sweet with a super clean aftertaste and finish. The palate was between light and medium bodied with a fair sessionability about it. Carbonation felt fine. ABV felt fine. Overall, decent as one of those "Americanized cream ales." Perhaps, I might give it another shot.

Look: A cloudy yellow-gold body teems with life as tiny bubbles race upwards to settle below a creamy cap of white. It looks like a Belgian witbier, or even a Bavarian hefeweizen. Oddly the head drops fairly quickly, and thus the lacing is limited beyond what's left by the initial pour.

Smell: Yeasty. Phenolic with plastic/clove. Sweetish like malt and sugar. A touch of vanilla. Certainly not what I was expecting.

Taste: As the aroma indicates with more vanilla. The yeast and phenols are not pleasant. It seems that this is an old can, with the yeast struggling to hold on, giving off phenols and fermenting everything it could. Unfortunately it's not dated. It has a bit of tartness that I'm guessing wasn't intended, but I really have no way of knowing. Or perhaps this particular can was just at the end of a run and got a bit too much yeast in it? Looking inside the can I can see even more yeast that had sedimented out caked on the bottom.

Feel: Medium-bodied and zesty in the mouth with a fine-bubbled effervescent carbonation. Astringent like grape skins on the teeth.

Overall: One of the worst beers I've ever tasted, really not much above the level of bad home brew. Fortunately I think it's just a batch can, or even batch, or just old and "forgotten" - a poster child for the need for tight QA. If someone from the brewery reads this you should pull everything from the shelves of Total Wine and invest in an ink jet to at least put a production code on it. Had this been the first beer I'd tasted from "Forgotten Boardwalk" I'd have completely written them off forever. As it is not I'll seek a fresh can and try again.

I am really looking forward to getting The CANQuest (tm) up and rolling again. I have been noodling around with bottles lately as well as making preparations for a recycling run today & this has all CANbined to cause me to lose focus. In case you are CANcerned, the recycling is all "found" aluminum CANs - Red Bull, Arizona, a LOT of Bud, et al. I crush them down and take them for recycling about twice a year. The craft CANs go to Jeff Lebo, at his request. Jeff is the owner of Brewhouse Mountain Inn, which CAN be seen at CANsmartbeerCANs.com. This is how The CANQuest (tm) rolls!

From the CAN: "A Curious Brewery and Refuge"; "Profile[:] Delicate & smooth - With hints of creamy vanilla"; "Notice[:] Always Shimmy [-] Never Shake! [-] Enjoy responsibly"; "C[AN]fectionery Treat Shakes the Seaside!"; "After a late performance 'Dancin' Dottie' and her Golden Gals, famous for their suggestive take on 'The Shimmy,' strolled the shore and found a bottle with an enclosed recipe. After deciphering the soaked ink, the odd cake they made became one more sweet temptation that kept beachgoers lining up for the show."; "Have your cake in a 'CAN-CAN'".

I CAN't go along with their origin story, since Funnel Cake is pretty much recognized as coming from Germany with the Pennsylvania Dutch (Deutsch/Amish), but I CAN CANduct a Crack! & Glug. The Crack! released some foaming through the vent, but I chalked it up to having dropped (& slightly dented) the CAN, so I pressed on with an inverted Glug, producing two-plus fingers of dense, puffy, rocky, bone-white head with decent retention. Color was a hazy Yellow-Gold (SRM = 4 - 5). Nose did not hint at vanilla, it shouted vanilla! I love cooking with vanilla, but it is very flammable, as evidenced in a recent episode of "Preacher". This smelled like vanilla cookies, or at least, vanilla cookie dough. I used to love to bake as a kid, but I do precious little of it these days. Mouthfeel was medium. The taste was very much 'Nilla Wafers or sugar cookies with extra vanilla! Oh my! I really get a charge out of the idea that the base is a Cream Ale. They are generally fairly sweet to begin with, but it is really inspired to add vanilla (which CAN mask the common corn adjunct, which is also a hallmark of the style). Finish was sweet, but not cloying. I would caution you that you had better enjoy the taste of vanilla if you plan to tackle this one. It was definitely not subtle.

amber in color, white head. some lacing. is aroma is mostly vanilla - which given the name it does click. but wouldn't identify funnel cake unless prompted. sweet flavor, but not cloying. overall, interesting take.

Single can copped from Total Wine and More. Pours a copper, amber hue. Minimal froth. Slightly sweet, caramel, aroma. Similar malty sweetness on the tongue. Easily drinkable and true to it's name, yet the overall taste left something to be desired.

This is a unique beer that's pretty enjoyable and easy drinking. The smell is beery, grainy, with some vanilla and powdered sugar. The taste is full of vanilla with a slightly sweet powdered sugar finish. Something different but pretty good. yb

Funnel Cake beer is a pretty solid choice for a sweet and deceptively interesting beer. It has a vanilla, sugar hints that do not overpower the beer-ness that we all know and love.

A thanks to the captain of the canquest, woodychandler, for this beer. Poured from a 12 oz. can. Has a cloudy golden color with a 1/2 inch head. Smell is of vanilla, cream. Taste is like a cream soda, vanilla, grains, malts. Feels medium bodied in the mouth and overall is a fine example of this style.