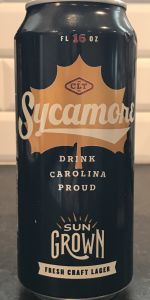 I'm trying this at Afton Tavern in Concord, NC. It poured a clear yellow with white head that is leaving a spotty lace. The scent had faint biscuit. The taste was nicely balanced and easy to drink. Great summer beer. The mouthfeel is lighter in body with good carbonation. Overall it is a good beer.

A: The beer is hazy light pale yellow in color. It poured with a short bright white head.
S: Light aromas of pale malts are present in the nose.
T: Similar to the smell, the taste has light flavors of nondescript malts (possibly grains) along with a slight amount of bitterness.
M: It feels light-bodied on the palate and has a moderate amount of carbonation.
O: This beer isn't very flavorful but goes down easily.

A: Pours a relatively clear pale yellow in color with moderate to heavy amounts of active visible carbonation rising quickly from the bottom of the glass and faint straw yellow + pale golden yellow colored highlights. The beer has a two finger tall fizzy foamy bright white head that quickly reduces to a medium sized patch of mottled very thin film covering a little more than 40% of the surface of the beer and a thin ring at the edges of the glass. Minimal amounts of lacing are observed.

T: Upfront there are just shy of moderate flavors of pale + cereal grain malts with a hint of grainy sweetness. That is followed by very light flavors of grassy hops which impart a light amount of lingering bitterness.

O: Easy to drink and refreshing with well hidden alcohol. Enjoyable and sessionable, a really nice offering for a hot summer day (or a really warm February afternoon). A nice craft example of the style.

Sun Grown from Sycamore Brewing
Beer rating: 74 out of 100 with 12 ratings