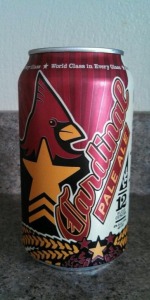 Notes: Our Pale Ale is deep golden in color and characterized by a floral/citrus-like aroma, with medium maltiness and low bitterness. Cardinal Pale Ale, the heart of Nebraska Brewing Company, is where it all began so many years ago.

Rated by HighestBAC1015 from Nebraska

3.81/5  rDev +3.8%
look: 4 | smell: 3.5 | taste: 4 | feel: 3.75 | overall: 3.75
My good friend and old neighbor from Oswego gave me a can of this beer. It poured a slightly hazy orangish with white head that is leaving a nice lace. The scent had subtle pine hops. The taste was nicely balanced and easy to drink with malt base and hop finish. The mouthfeel was lighter in body with good carbonation. Overall its a good beer.
Oct 26, 2019
Rated: 3.5 by Giggy from Michigan

My sample was canned 03/18/19 and states "Drink Local". Well, I'm not that close to La Vista, NE, but I surely will drink their beer. Jesus, but this is a finely balanced and tasty brew! I believe I got this two of these through Tavour, and I only wish I had more or that it was distributed here in Colorado Springs. This is a good one, folks!. Get it and enjoy!!

Reviewed by beersampler6 from Michigan

3.52/5  rDev -4.1%
look: 3.75 | smell: 3.5 | taste: 3.5 | feel: 3.5 | overall: 3.5
Nice, safe pale ale that I found refreshing and easy to drink. Pours a deeper golden color with some nice fluffy white head and very spotty lingering lacing. Smells of more muddled citrus and floral hops, as well as some malt and caramel. Tastes mainly of some more faint grapefruit, orange and lemon hops as well as some weaker floral hops, malt, caramel, nuttiness and maybe a little vanilla. Smooth, thin, mild, clean mouthfeel and decent carbonation. Not bad but I definitely have other go-to pale ales on my list.
Apr 21, 2019
Rated: 3.99 by etreesh from Wyoming

The smell is lemon, floral, and malt.

The taste follows with a bright grassy flavor and a small malt balance on the finish.

The mouthfeel is medium across the board.

Overall a nice, easy to drink pale ale. A decent mix of flavors.

Smell: It has aromas of citrus and passion fruit. There is a grainy sweet background with a low note of apple.

Taste: The initial sweetness of grapes mixed with floral elements. There is a bit of citrus and low soy in the background.

Feel: The aftertaste has moderately low bitterness with some harshness.

Overall, the background harsh notes could be smoothed out a bit with the flavor and aroma being decent.

Rated by JLaw55 from Missouri

Reviewed by NilocRellim from Minnesota

3.5/5  rDev -4.6%
look: 3.5 | smell: 3.5 | taste: 3.5 | feel: 3.5 | overall: 3.5
This was poured into a pint glass. The appearance was a hazy burnt orange color with a one finger white foamy head that dissipated within about a minute leaving a light foamy lacing sticking around the sides of the glass decently. The smell had a semi - sweet malty citrus over top of a light piney bitter hops. The taste took all of those previously mentioned flavors to blend nicely. A dry sweet citrus aftertaste leads to a decent sticky finish. On the palate, this one sat about a light to medium on the body with a fairly decent sessionability about it. The carbonation good for the style and for me as it’s not too sharp. Overall, I say this was a decent APA that I could have again.
Jun 20, 2017
Rated: 3 by Bryan12345 from Texas

A- The can looks nice, it's got a nice design that goes well with the name and it's a little eye catching. It poured a slightly hazy amber orange color that took on more of darker orange color when held to the light and it had almost three fingers worth of fluffy off white head that died down to a thin ring that stayed till the end and it left some patchy rings of lacing behind. This is a very nice looking Pale Ale, I have no complaints.

S- The aroma starts off with a higher amount of medium sweetness with the hops being the first to show up and they impart some citrus rind, fruity, and lightly floral hops with the citrus rind hops seeming to stick out the most. Up next comes some noticeable doughy yeast and that goes into the malts which impart some pale malt, caramel malt, lightly toasted, biscuit, bread crust and sweet malt like aroma. This beer has a pretty nice aroma, it's got nice balance and it's what I would expect from a Pale Ale.

T- The taste seems to be fairly similar to the aroma and it starts off with a slightly higher amount of medium sweetness with the hops still being the first to show up and they impart all the same aspects that they did in the aroma, but this time there's also a little green hops coming through in the background. Up next comes the doughy yeas which isn't as noticeable as it was in the aroma and it's followed by the malts which impart all those same malty aspects that they did in the aroma with no single aspects seeming to stick out the most. On the finish there's a somewhat lighter amount of medium bitterness with a 50/50 mix of malty and hoppy flavors in the aftertaste. This is a pretty nice tasting Pale Ale, it's true to style and it's got good balance.

M- Smooth, crisp, a little clean, slightly creamy, medium bodied with a slightly higher amount of medium carbonation. The mouthfeel is good and it works well with this beer.

Overall I thought this was a pretty nice beer and I thought it was a good example of the style, nothing seemed out of place and it had all the aspects that I was looking for in a Pale Ale. This beer has good drinkability, I think I could drink a few of these without getting bored of it. What I like the most about this beer is the appearance, the mouthfeel, the balance and how true to style it is, to me those were the highlights of this beer. What I liked the least about this beer was nothing, there wasn't anything I disliked about this beer, it's fine just the way it is. I would buy this beer again and I wouldn't turn one down. I would recommend it to anyone looking for balanced and true to style Pale Ale. All in all I enjoyed this beer and it turned out to be just what I was hoping it would be for a Pale Ale. It made for a good first impression for this brewery and I'm interested to see what they can do with other styles and it's a good example of the style. Good job guys, this is a tasty Pale Ale, keep up the hard work.

Reviewed by FriedSlug from North Carolina