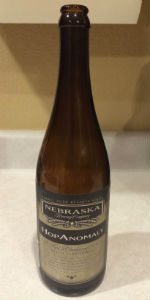 Notes: (Previously known as HopAnomaly) A beautiful golden crossbreed of a Belgian Tripel and a West Coast IPA. A remarkable explosion on the palate with spiciness, tropical fruit, and a firm citrus bitterness that will leave you begging for more! Aromas of grapefruit, citrus, and piney hops & tastes on the palate that tend toward pineapple, mango, and sweeter fruits. A big beer that was inspired by the West Coast – yet brewed by a Midwestern brewery not content with the status quo.

This listing is for the draft-only version of the beer that is NOT barrel-aged. Bottles should be reviewed here - http://beeradvocate.com/beer/profile/16504/56953

Reviewed by TerryMills from Tennessee

I would say its a Belgian with a super light hint of bitterness (almost undetectable) and a blast of chardonnay on the end with a dry finish ..

Very well put together as with everything ive tried from Nebraska Brewing.. Top shelf company.

Taste was again, I guess a hop anomaly, because they just aren't here. All belgian ipa yeast esters. The heat is too pronounced. Would recommend everyone avoid this, especially at the price.

Nose is a bit muddled, but you get the fruitiness of the Triple (banana, pear), mainly, but also an earthy to piney hint of bitterness.

Taste is Belgian heavy, the esters of the nose taking flavor form. Pear, Apple, spice, banana all up front. It's heavier than a tripel, though, even though the carbonation is adequately present. Early to mid-taste, the bitterness starts to grab hold. Earthy in nature, tending towards grassy, I think it could be piney were it not combined with the fruity Belgian notes. The ending is dry, herbal, and lingering.

I'd suggest letting the beer warm slightly before engaging. It ends up feeling more like a nice, somewhat of a hip-leaning APA when all is said and done. The Belgian front would be the big divergence from this. Also, I can see my tongue wearying of this after a couple. Still an enjoyable beer.

Reviewed by martyl1000 from Wisconsin

Wrongly assumed by the name and strength this was a IIPA. Then the forthright Belgian character duked it out with my IIPA.expectations. the best I could tell was