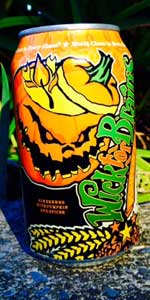 Notes: Wick for Brains is our classic and painstakingly produced Fall Pumpkin Ale. Instead of simply using spice, we use real pumpkin which lends a sweetness and pumpkin flavor not found in many Pumpkin Ales. Wonderful pumpkin pie spice intertwined in an Amber Ale creates a pumpkin sensation which is elegantly crafted. Notes of Cinnamon, Nutmeg, Clove, Ginger and Allspice blend perfectly in this seasonal Ale. There are many Pumpkin Ales out there crafted by some wonderful breweries – we feel that ours stands among them and in some cases – stands apart.
View: More Beers | Place Reviews
Recent ratings and reviews. | Log in to view more ratings + sorting options.

Aroma: Understated notes of pumpkin pie spices, cinnamon, cloves and nutmeg spices vie with pumpkin flesh to comprise the aroma. There is also a mineral note and a hint of pastry crust.

Taste: The taste opens with mild pumpkin spice, particularly cinnamon and cloves. This is soon followed by a quite understated wave of caramel and brown sugar. Underlying it all throughout the taste is lightly toasted pumpkin. Towards the end of the taste, there is a bit of earthiness and some mild herbal hops. A bit of pumpkin spice and brown sugar linger on, well past the end of the taste.

Mouth feel: Slightly thin, but some and pleasant, with just a hint of carbonation.

Drinkability/notes: There are, in my view, two basic types of pumpkin beers: liquid pumpkin pie in a glass, and something more traditional, like might have been made by early Americans using pumpkin and other local ingredients that they had at hand to make an ordinary ale. Wick For Brains is more of the latter type than the former. In the interest of full disclosure, I love pumpkin beers, have had many different examples and enjoyed them all. Wick For Brains reminds me more of Brooklyn Post Road than say, St. Arnold Pumpkinator or Prairie Basic Becky. Well done!

Presentation: Packaged in a standard twelve-ounce aluminum can, served in a South American-style Pilsener glass.

3.55/5  rDev -0.3%
look: 3.5 | smell: 3.5 | taste: 3.5 | feel: 4 | overall: 3.5
Poured from a can into a pint glass
Appearance – The beer pours a clear orange amber color with a one finger head of lightly tinted orange foam. The head fades rather fast leaving a tiny bit of foamy lace on the sides of the glass.
Smell – The aroma of the brew is massive of a raw pumpkin smell mixed with some light spice of cinnamon and nutmeg. Along with these smells comes some aromas of a cracker and bready malt, giving it a almost raw canned pumpkin puree smell.
Taste - The taste begins with a sweeter bready and doughy taste mixed with a moderate showing of a caramel and brown sugar sweetened pumpkin taste. As the taste advances some flavors of pumpkin seeds as a moderate showing of some confectioners sugar like sweetness comes to the tongue. All the while flavors of nutmeg and clove, as well as a touch of cinnamon, come to the tongue, leaving one with a sweet, but raw pumpkin like taste to linger on the tongue.
Mouthfeel – The body of the brew is medium in thickness and creaminess with a carbonation level that is rather average. Overall, the feel is pretty decent for the sweeter pumpkin flavors of the brew.
Overall – An alright pumpkin brew, but nothing too special.

Reviewed by Beerboe from Missouri

The taste is the same, with subtle spices, which I like better than too much cinnamon, clove nutmeg. I like the roasted pumpkin and floral hops. There is no "disagreeable hop flavor" at all. I like that it's made with pumpkin, not just pumpkin spices. It could use a little more pumpkin in my opinion, but having less probably makes it more drinkable.
Mouthfeel is good, not too thin and not a lot of carbonation, which I don't care for. It's pretty smooth and easy to drink.
In summary, if you're looking for lots of sweet pumpkin pie flavor in a can, you should look elsewhere, but for an easy drinker with some (enough) pumpkin taste, this fills the bill.

Reviewed by JohnDee from Texas

Reviewed by JohnDon from Texas

Reviewed by BlunderfulGuy from Nebraska

Light fermented pumpkin, hint of ginger and spices in a clean, classic amber ale aroma. Subtle spices compared to the typical cinnamon clove nutmeg pumpkin beers.
Caramel, oat crackers, fresh and roasted pumpkin, floral hops throughout. Light bitter and biscuity finish, long pleasant lingering pumpkin pie spice. Definitely made with pumpkin, but not a spice bomb.
Mouthfeel is as expected for an amber or pumpkin ale and pretty smooth to me.

Refreshing, both for a long day with a pizza and overcast weather and for a pumpkin beer. I like it even though I've tended to lean more towards sweet pumpkin pie overload in the past.

3.28/5  rDev -7.9%
look: 2.25 | smell: 3.5 | taste: 3.25 | feel: 3.5 | overall: 3.25
DATE: December 22, 2016... OCCASION: Christmas so close, and the new TV is up and functional in 4K... GLASSWARE: Hobgoblin pint... sallow orange amber body with zesty swirling bubbles... a fizzing white head flatlines to a thin halo... ginger, nutmeg, soft pumpkin and allspice invite a second breathe...mint tea and clove as well... some bread malts suggest the amber aspect... mellow, light-bodied and easily downable... its finish is lively... spicy, with plenty of pumpkin to spare as promised... the profile is nutmeg, allspice and pumpkin--as indicated, an organic, natural pumpkin ale that wins in its accessibility... not a beer that demands its own night, but one that at 6% ABV could accompany adults on a Halloween night...
Dec 23, 2016

Appearance: Pours sightly hazy, and golden with a decent head that has very good retention.

Notes via stream of conscious: Orange in color with some haze - good color for a pumpkin beer. I guess the haze can be forgiven. Its creamy off white head is short lived and leaves only limited lacing behind. Aromas of pumpkin spice and sweetish, gently caramelish, bready malt. Balanced. The flavor follows without the spice becoming any more than it is in the aroma... perhaps a little, it is a spiced ale (cinnamon, ginger, perhaps all-spice). You don't normally taste the squash in a beer like this but I somehow feel there's an edge of it coming through adding just a thin slice of added character. Fruity with apple, kind of like apple cider, which also works in a pumpkin beer. A limited bitterness is all that's needed as the spices help to balance and dry it. Light medium in body with a smooth, moderate carbonation (which helps in spiced beers as the carbonic acid can elevate the spiciness). It's interesting in that it's not overdone, which is something I look for and praise in spiced beers, yet it seems a little bit underdone as well if that's possible - it is quite drinkable... Overall pretty nice. Not the best pumpkin beer I've had, but there is something charming about it. p.s.- as it warms clove appears; perhaps that's part of what I find interesting as you don't always get that in pumpkin beers.

Rated by ScreaminScott from Texas

4.1/5  rDev +15.2%
look: 4 | smell: 4 | taste: 4.25 | feel: 4 | overall: 4
12oz can from Noble Grains NYC on the UES
Pours a clear amber orange with fleeting white head, smells quite acidic with mild spicy ginger, nutmeg, and pumpkin puree, a raw spiced pumpkin pie filling basically, tastes like very sweet and light pumpkin followed by mild nutmeg and cinnamon, slight hints of sourness throughout as well, this is a very light and dry beer. A very crisp pumpkin beer that has the beginnings or hints of a pumpkin sour, and come to think of it, a full blown pumpkin sour would be delightful.
Sep 11, 2016
Wick For Brains from Nebraska Brewing Company Production Brewery & Tap Room
Beer rating: 81 out of 100 with 199 ratings