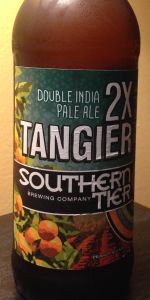 Taste is bit citrus rind bitterness that is a bit more bitter than i anticipated - maybe its the age of the brew that has caused some unwanted bitter rind dominant flavors. Flavor finishes with lighter malt and hint of grassy hops.

Mouthfeel is moderate with some carbonation and lingering bitter dryness.

Overall an add take on the fruited hoppy beer with a strong bitter citrus rind aroma and flavor.

3.77/5  rDev -5%
look: 4 | smell: 3.75 | taste: 3.75 | feel: 3.75 | overall: 3.75
$ 10.00 (Including tax)/six-pack of 12 oz bottles ($ 0.139/oz) at Franklin Beer, Franklin, PA.
DOB 06/16/17. Stored on the shelf at the store, in my 42 degree reefer at home. Served at 42 degrees in a hand washed and dried Jester King snifter.
Aroma – Initially, general citrus with some sourness. Rapidly fades.
Head – Just breaks into large (Maximum 4 cm, aggressive pour), off white, creamy with rocks, average retention, diminishing to a nine to ten mm frothy ring fed by effervescence. There is a mostly thin complete layer with a couple rocky islands.
Lacing – Excellent. Thick complete rings of almost exclusively tiny bubbles, connected by short columns.
Body – Orange, chill haze, effervescent.
Flavor – Begins with a slightly bitter general citrus flavor with the bitterness more like the white reticulum associated with citrus peel than from malt or hops. A bit of malt sneaks through, probably because of the age of this beer. No alcohol, no hops, no diacetyl.
Palate – Medium, watery, soft carbonation.

Impression: Actually pretty passable for a nearly five-month old DIPA. The citrus is more generic than tangerine, but that could be due to the age of the beer. In general, I have found the 2X series of beers from ST to be more flavorful and enjoyable than their regular beers, even if not better rated. Since this is rotating brew, I’ll try to snag some earlier next year. The price point is excellent.

Rated by Cindicameron from Virginia

T/F: Light grains and sweet without a lot of malt character. The tangerine overwhelms the palate, but not in a terrible way. Sweet citrus... orange juice with some underlying floral notes and pepper. Bitterness is present but hidden. Light in body... warming with a bittersweet finish. heavy on the citrus.

O: For a tangerine DIPA it's better than most. It's a little sweet but this works pretty well for this brew. Refreshing and definitely a summer beer.

Rated by Bluerabbitbell from Pennsylvania

Notes via stream of consciousness: Great looking glass of beer. It's a clear deep golden body beneath a rocky head of just slightly off-white foam. The aroma displays a distinct note of orange over a sweetish malt base with some additional light spiciness thrown in. The flavor follows, and I almost find a mintiness with the orange. I get the orange first, and then the mint with it, and then the sweetish bready malt and then back to the mint and a bit of herbs going into the finish. It's also solidly bitter, clearly showing you that it's a double IPA but not going to the point that it's too harsh and dry and you end up with that "bitter beer face" that Keystone Light used to advertise. I wonder what the hops are in here? It's interesting for sure, and certainly unique. What's the alcohol here? 8.1% ABV? Ayyyeee! I don't find any alcohol though except for perhaps a feeling of it in the finish. It doesn't stand out on its own. Medium bodied and crisp. Definitely worth trying if you're both a fan of fruit beers and double IPAs.

Rated by BulletsNBeers from Montana

3.11/5  rDev -21.7%
look: 3 | smell: 3.25 | taste: 3 | feel: 3 | overall: 3.25
Bottle to tulip, the appearance was a burnt golden color with a little white foamy head that fell off at a decent pace. Light trickling lace. The aroma had some stale cracker-like malts playing with some grapefruit sweet to bitter hops. Some light hop spice. The flavor was moderately sweet through the blend of the prior mentioned aromas. Malty sort of aftertaste. Finish was a bit sticky. The palate was medium bodied with a fair sipping quality about it. Carbonation felt fine. ABV felt fine. Overall, not really a standout DIPA for me, perhaps do-able in a pinch.
Jun 22, 2017
Rated: 4.77 by CHigby2K6 from New York