Why The Helles Not? Helles Lager
Southern Tier Brewing Company 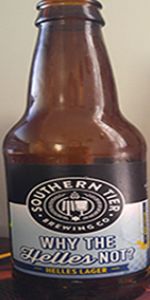 Taste on entry is a very good combination of what I like most about German Lagers. The malt is prominent without being heavy, fresh yeast bread and dry crackers, with solid accents of floral, spicy hops.
Flavors are well combined, complementary and work as a team.

Simple yet complex, they've got this one dialed in.

Look: Clear golden body beneath a short head of bright white that holds fairly well and leaves some nice, but limited, lacing about the glass.
Smell: Clean. Sweetish grainy malt with a touch of grassy hops.
Taste: Not surprisingly as the aroma suggests with some additional floral and lightly spicy and herbal hop character. A firm bitterness balances it, and it finishes semi-dry as the sweetish malt erodes and floral and lightly grassy notes swirl.
Feel: Medium-light in body and crisp.
Overall: A touch sweetish, and Munich malt doesn't clearly appear, but pretty nicely done. An enjoyable and refreshing lager.

T/F: Light malts... a little grainy with a bit of sweetness. Faint lemon... grassy. Modest bitterness but not a lot of hop character. Finish is crisp. Light with zesty carbonation.

Reviewed by fscottkey from New York

O: [2.75] At 4.6% that puts a beer in solid dock/poolside range but not this one. It is too sweet and not really refreshing. Like Mt Dew sweetness added to a lager. I am not a big fan.

Reviewed by bankboy66 from New Jersey

From the bottle: "Why the hell not?"

A fair question. I proceeded with a Pop! of the cap, followed by a gentle pour into an awaiting glass. I was a little surprised that no head formed on its own, so I lent an assist with an in-glass swirl, forming a finger of foamy, fizzy, bone-white head that quickly reverted to wisps. Color was a beautiful Yellow-Gold (SRM = 4 -5) with button-brightness, prompting a visit from The Gelt Gang of Mammon, Midas & Croesus, all of whom wanted a taste. Nose had a clean honey-like bready odor, like honey drizzled on fresh toast. Why clean? Because I realized early on in The CANQuest (tm) that many/most (?) AALs had this as their base before being utterly corrupted. Mouthfeel was light, not watery, but nothing to get excited about, either. The taste was slightly grassy in addition to having the honey-like breadiness noted on the nose. Finish was semi-dry, crisp & very refreshing. It was a very pleasant, easy-to-drink beer that would be perfect on a hot, humid summer's day, especially if they were to put it in a CAN.