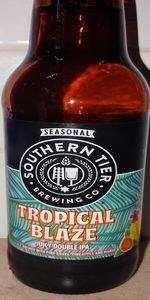 Not bad by any means but certainly not good. Thanks goodness i only paid $2 for the one single, the 4 pak prices I saw on Beermenus were ridiculous. $14 for this? very average beer. Not today. Looks ok, smells and tastes mildly fruity, not fruity enough for pineapple, and I love mango water ice, this is not that. Overall. mediocre, but easy drinking and you would never know it's 8.5%. Pass.

Interesting to see something like this with a huge amount of added fruit and have it not be a NEIPA, but rather a DIPA. Should make for an interesting juxtaposition of fruit vs hops

The guava must have been dosed pretty heavily in this one becuase that's the primary fruit note in the smell, almost a bit medicinal when combined with resiny piney hops. Lighter aromas of cherry, pineapple, and clean malt

This starts off bright and juicy, almost a touch tart with refreshing pineapple and lemon notes before those classic west coast hops come in to steal the show with crisp wheat

Light medium bodied with mild carbonation, this finishes quite crisp and dry. Would have been perfectly refreshing closer to the bottled date but this still hits the spot. Incredible that this is 8.5%, if you gave it to me blind I would have said 4%

A fun combo of 2 styles of IPAs. Crazy crushable for the abv, this would be a damn solid party beer. Good stuff here

Went all-in on a four-pack of this one because recent Southern Tier fruited stuff has been really good... I particularly love Citrus Punch (previously called 3 Citrus Peel Out), a juicy, somewhat-tart imperial wheat beer, so I figured this would probably be pretty close. It says "juicy" double IPA, but I will note that it's absolutely not a NEIPA. With that in mind, let's continue!

Pours a completely clear golden color with some light orange overtones if held up to light. Soapy, thin head with a bit of decent lace but nothing to really write home about. I was very surprised to see that this is so clear; I definitely prefer haze when it comes to something like this, but the aforementioned Citrus Punch is a hazier wheat-based beer, so maybe they figured they'd be a bit too similar. Some carbonation rising from the bottom of my glass with this one as well. It's alright looking, but I've seen better.

The nose is where things start to get fun and interesting, of course. I pick up a lot of mango flesh and light notes of grapefruit and orange pulp. The pineapple is a bit in the background while the guava lends a bit of a catty, juicy edge in the middle, backed up by the Azacca hops giving off notes of orchard fruit as well. Almost smells a little syrupy, could be the heavier-than-normal ABV playing some tricks though, who knows?

First sip is indeed a bit sugary and heavier than expected, though oddly still kind of crisp and well-balanced. Not as juicy as I'd prefer, but the hops do some good work here. Mosaic brings out some funky pine and berry undertones while the Azacca works well with the pineapple, bringing forward some additional tropical goodness. Finish is somewhat bitter and soapy, with an almost aspirin-like note to it that isn't great-tasting, but I do feel this is a pretty good drink when all's said and done. Doesn't quite drink as strong as it is, and that definitely helps bring out the added fruit flavors... just kind of wish some of those elements were a touch more distinct.

S - Citrus, guava, and mango on the nose with a slight shot of sticky sweetness.

T - Guava and mango dominate from start to finish. On the very back end there is some lingering citrus sweetness with some underlying delicate grain character.

M - Extremely thick for a D-IPA, very dry on the back of the tongue while the rest of the mouth salivates.

O - Decent, but there's a bit of an underlying flavor going on I can't quite peg. Southern Tier is one of my favorite breweries but this one isn't doing it for me ... can take it or leave it (sorry to say). It's definitely worth trying, I'm good for a 4-pk and done.

Pours clear, gold in color with 1/3 inch head. Taste is big guava, with grapefruit, and light mango. Dry, medium-light bodied, bitter with some juiciness, and high carbonation. Makes for a solid dipa. A nice break from NEIPAs--still get pplenty of fruit taste but a lot of west coast ipa going on here too. Interesting. Glad I got a four pack.