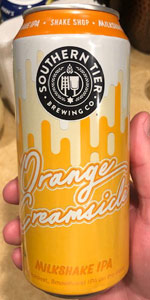 Pours hazy, orange gold in color with one quarter inch head. Taste is orange creamsicle, vanilla and orange. Medium bodied, slightly bitter with moderate carbonation. I prefer the vanilla shake but this is decent. Not sure if I would get this again but this is loosely a creamsicle.

1 PINT can
Served in a stemless wine glass

This beer pours an orangish yellow color and is turbid. It is topped with an inch of beige head that leaves no lacing.

The smell is vanilla and orange. There are some hints of underlying tropical fruit.

Orange and vanilla up front. Once again I get some hints of tropical fruit.

Medium bodied with a creamy mouthfeel

One of the rare beers that live up to what my mind was hoping it would taste like. It tastes like an orange creamsicle. It drinks very easily.

Look: Looks kind of like unfiltered orange soda, but not as carbonated. Has a rich, deep orange hue with a lighter glow on the edges. Rocky, crumbly head that went down to nothing pretty quickly. Looks like an orange creamsicle beer.

Smell: Orange soda and vanilla ice cream. Together. That's what it smells like. There is a faint smell of Flintstone orange vitamins.

Taste: The taste follows the nose and it basically meets the expectations of an orange creamsicle milkshake IPA. Up front - orange soda effervescence and vanilla, moves to a lingering creamy finish with orange peel and some generic bitterness. Not particularly refreshing as there is a lot of sugar within, but it is fairly drinkable. There is also a bit of acidity on the finish, which works well here. Taste is a bit chalky.

Overall: I'll admit, this is a bit weird. I've had one of these types of beers before, and I think that this is the better one. But it still feels weird to me. It just doesn't really taste like beer, and it certainly would never fool anyone as being an ice cream float or milkshake either. It's just a weird combination of flavors. An interesting beer for the novelty, but I probably wouldn't have it again even though I am a big fan of orange creamsicles.

Pours into my tulip an opaque pale lemon meringue yellow with a creamy bubbly offwhite head.

Scent is quite literally orange creamsicles. Plus pineapple.

Taste is orange creamsicles. Or Orange Julius. Remember Orange Julius? Think I'm showing my age. Cream and sugar. Vanilla. Retardedly sweet. There is a little bit of bitterness that attempts to balance it out but is quickly overwhelmed and beaten senseless and left bleeding in a ditch.

Drinkability for me at least was nil. I couldn't finish it. Too sweet and weird.

This one pours a somewhat hazy golden yellow color, with a small head, and a little bit of lacing.

This smells like citrusy hops, candied orange, vanilla, orange creamsicle, and some maltiness.

This is surprisingly a good take on the style. It's a bit more light bodied than a milkshake from Tired Hands or Mortalis, but it's super drinkable, with a nice subtle creaminess, and a bit of sweet orange. It still feels like an IPA, unlike some milkshake IPAs. There's a touch of maltiness, but nothing overwhelming.

This is light bodied, creamy, and very drinkable.

I liked this one much more than I figured Iw ould. Southern Tier can still do it, I guess.

Mouthfeel is low carbonation, moderate sweetness but quick bitter backing which keeps the IPA style present - I don't think i would like this as much if it had a sweet, lingering finish.

Overall a near perfect spin on a flavor profile while keeping the style to mind - it smells and has an immediate taste of creamsicle, but has enough hop presence/ mouthfeel to counter the lingering sweetness from the lactose and sweeter malts to remind you that this is an IPA in its base.

DATE: August 23, 2020... OCCASION: completing some NJ EXCEL work and preparing for the new hybrid school year to start with what I hoe is a dessert of a beer... GLASSWARE: HopDevil nonick... monstrous two-fingered off-white head creates sea foam and bubbles before settling to a reasonable film... its body, a sallower shade of its can's warm orange, forms the expected opacity that blurs completely... wow, this is tangy--almost like snorting Tang powder, though the vanilla sweetens the deal a bit... discernible also is its lactose and papaya juice, a bit of coconut and candied sugars that suggest toffee... the mouthfeel is punchy, high in IBUs, puckerish at the introduction and creamy in the middle... a cocktail for sure, it stings the tongue when swished and resides at the throat for a long draw... almost too much, it does have some fizziness as well, but its medium-bodied presence is mostly the lactose weighing in... the flavor rivals a Kohrs creamsicle on the boardwalk--sweet, tart, creamy, popping with orange and papaya, guava and other citric delights, balanced with a milky sweetness... by the second can, the senses right themselves and an appreciable appraisal can be made... refreshing but substantial, this does indeed approximate a desert while not hammering the ABV like the Creme Brulee or Thick Mint does... ST again nails a style and blesses us with the fruit of its labor...

Canned on 7/15/20. 16oz can poured into a tulip. Pours a hazy yellowish golden; fluffy white head that fades leaving solid bubbly retention and okay lacing. The aromas literally smell like an orange creamsicle. Lots of orange along with some hints of vanilla. Malts are there. The flavors follow the nose perfectly. The flavors literally taste like an orange creamsicle as well. Lots of sweet oranges leading the way. The vanilla cream isn't shy. It's sweet, but nothing cloying or over the top. Low bitterness. Malts do their thing. Finishes very juicy. Alcohol goes unnoticed. Mouthfeel is very nice. It's medium-bodied with moderate to active carbonation. It's sharp, fluffy, smooth and easy to drink.

This is a nice brew. They absolutely nailed the "orange creamsicle" characteristics and gets a ton of credit for that alone. It has a dessert vibe to it. This beer fits well with what Southern Tier likes to do. Well done.

Awesome! King Sue at half the price!
UPDATE: too sweet and too creamsicle-y

Part of their whip series. An orange milkshake beer with added vanilla and orange. Nice balance of both lactose and orange flavor while still being very creamy. Although I think the vanilla whip was better this is still a very good milkshake ipa. Should be a category for it.