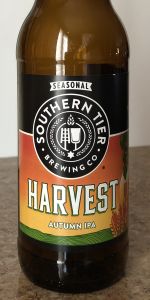 Notes: Our Harvest IPA is brewed with American hops, cracked barley and hard work as a tribute to what makes our beer so special – the harvest. The deep ruby color evokes a bright autumn mountainside where a warm sweater, a good beer and the gratitude for the seasons are all you need. Cheers to the harvest, whatever it may bring you!
View: Beers | Place Reviews
Reviews: 7 | Ratings: 15 | Log in to view all ratings and sort

Pours clear, copper in color with one quarter inch head. Taste is earthy hops and grapefruit. Medium, bitter with moderate carbonation. Makes for an average ipa. Wouldn't get again. Doesn't stand out.

The pour is similar to burnt orange. The taste is malts, orange pith, cereal grains, herbal tea. It's a decent IPA but it sort of falls a little flat for me. Cheers! B

Pours a nearly translucent brownish orange with about a half a finger of thin white head. Moderate retention, less than average lacing.

Picking up some light notes of herbals and pine along with a bit of bready maltiness.

Taste is dominated by pine bitterness with some hints of the marzen/octoberfest malts.

Overall, this beer grew on me through the six pack. Maybe a hybrid between an octoberfest lager and an IPA. IPA characteristics dominate. Reminded me ever so slightly of SN Celebration, but not nearly as good.

6 oz pour on tap. Moderate hop bitterness is balanced with caramel malt sweetness. Nice citrus (grapefruit) and pine hoppiness. Surprisingly my wife enjoyed this as much or more than I did. It's a nice fall IPA - it really does come across that way - but nothing spectacular or memorable.

Appearance: The beer has a body that has decent clarity. It is a light amber-brown color with hints of dark gold. There is a short off-white head with a hint of tobacco stained yellow. The short head is fluffy and it has decent retention even though it stays low in the glass.

Aroma: It has a light pine aroma with a bit of lime. There is a hint of rye bread aroma.

Taste: The flavor matches the aroma. It tastes like pine and lime up front. Towards the middle the flavor amplifies. Towards the back and in the aftertaste there is some grapefruit peel and a noticeable grain flavor which tastes a bit like rye toast. There is a light alcohol presence that pops up from time to time.

Mouthfeel: Carbonation feels higher than average but it doesn't detract from the body which is a bit on the high end of light. Bitterness is on the stronger side which is nice.

Overall: It is a good IPA. It's interesting because the label says that this is a "HARVEST AUTUMN IPA" and there is a banner that says "SEASONAL" on top. It doesn't mention on the bottle if there is anything special about this beer which makes it seasonal, but it really doesn't need anything special. The beer is enjoyable and I would both drink it again and recommend it.

Two twelve ounce bottles poured into a clear glass liter mug. A bright and light copper color appears with an off- white head. The head ebbs quickly and there isn't much glass lacing. There is a slight earthy and hoppy aroma to it. The taste is of earthy malts and dry hops, in a nice mix. The malt also brings, with the alcohol, some sweetness, but in a good way. A very nice seasonal offering out of the Empire State.

Amber-hued and clear with a coupla fingers of white foam - very hoppy with citrus and pine impressions but also warming and chewy with a sweet gentle malt base - somewhat like a marzen/ipa hybrid - perfect for the fall season - juicy but toasty too...