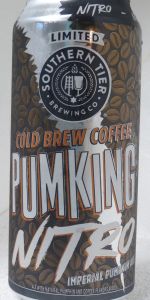 Nitro can poured into a goblet

M- medium body with a creamy and silky mouthfeel that continues into a creamy finish, high drinkability

L - Murky copper with a light tan head that sticks around. It's got that characteristic perfect looking nitro brew look.
S - Tons of roasted, bitter coffee along with notes of pumpkin pie - nutmeg, cloves, allspice, cinnamon. Some vanilla as well. Great smelling beer.
T - roasted, bitter coffee up front and throughout along with notes of pumpkin pie - nutmeg, cinnamon, allspice, cloves, along with some vanilla.
F - typical nitro feel - medium bodied with light carbonation. Very smooth, but somewhat thin.
O - I prefer this nitro version over the standard pumking as the coffee better fits with the nitro feel. Overall it's a fantastic beer, but I'd probably prefer the non nitro version.

Honestly, ever since I picked this one up, I thought it was just a nitro version of the OG Pumking, as the 2 were next to each other at the store and I must have grabbed the wrong one. I was in the mood for a pumpkin beer tonight, but it looks like I'll be getting a pumpkin/coffee hybrid. Fine by me

The coffee and the pumpkin actually play together nicely in the nose. I'm picking up on aromas of pumpkin meat, pie crust, medium roast coffee, nutmeg, and caramel malt

A medium body pairs with very gentle carbonation, resulting in a super rich and creamy beer. Despite this, it finishes rather dry and spiced

This one is pretty fun. Again, I was going in expecting OG Pumking on nitro, but I'm happy I accidentally grabbed this

13.8 oz nitro can poured into a pint glass

A- A clear amber with a big cascading nitro head.

S- Typical Pumking/pumpkin pie with some nice cold brew coffee in the background.

O- I can see where mixed reviews are coming from with this, the taste isn’t as good as the nose but I still enjoy it.

It follows the style & description on the can; however, I don’t like the flavor. It looks & smells good, but the flavors do not meld well to me.

Beautiful, crystal clear coppery brew. Because of the nitro treatment, cold brew coffee addition, and can art, you might be tempted into expecting a dark body a la Warlock, but this is much closer to OG Pumking, if a shade darker. Head production and retention are ... well, it's a nitro brew. You get the idea.

Pumpkin spice leads the way on the nose, along with a hint of actual pumpkin, although there is a warm coffee note, along with caramel malt lingering in the background. It smells quite nice, if not particularly complex.

Flavor is fairly in line with regular Pumking, which for me is disappointing, as I've always found the pumpkin spice to have an awkward artificiality to it - and that translates here, as well. The coffee is a nice addition, adding some depth and richness, but it's not strong enough to be a major player. This is still very much Pumking, much more so than a coffee beer, so how much you enjoy it is likely tied to how much you enjoy Pumking - and pumpkin ales in general.

Very smooth mouthfeel, of course, as a nitro brew. Long finish, which is surprising, given that it also has a very drily spicy aspect. Between the coffee and the pumpkin spices, the finish is bitter without balance. This affects the flavor, as it's much smoother and richer up front, but awkward, if not unpleasant, on the finish and aftertaste.

Pumpkin ales are necessarily divisive; pumpkin spice ales even more so. You kind of know what you're getting into, but at the same time, there are some pleasantly complex and impressive examples within the style (e.g. Southern Tier Warlock, Two Roads Roadsmary's Baby). This is not one of those beers, but it's fine; it tastes good, it's a pumpkin ale, and it fits the season quite well. I'm unlikely to intentionally revisit it, however, even in subsequent seasons, when there are quite simply better examples around.

A: The beer is clear yellowish orange in color and has a light amount of visible carbonation. It poured with a half finger high creamy and dense off white head that has very good retention properties and hardly died down.
S: Moderate aromas of pumpkin spices are present in the nose along with hints of coffee.
T: The taste has moderately strong flavors of pumpkin and pumpkin spices along with notes of cold brew coffee.
M: It feels medium-bodied on the palate and very smooth with a moderate amount of carbonation.
O: I enjoyed this variation of pumpking as the cold brew coffee doesn't overpower the pumpkin flavors.

this beer made me make an account just so i could come and give it 5/5
legit the best beer iv had.

Pours a typical Pumking amber color, ample creamy nitro head. Aroma is standard Pumking, I don’t get any coffee aroma. Flavor is Pumking with a light bitter coffee finish. Creamy nitro texture. Overall, the coffee addition is not my favorite, but glad I tried it.

There's a whizzing sound, as the nitro gas in the pint can is released by pulling the tab. Before the pour, into a clear glass liter mug, is the aroma. It smells much like that gathering after a Thanksgiving dinner. Yes, there are pumpkin pie spices to be had, but the aroma of fresh brewed coffee dominates, just like this. So, the nose warns that if you don't like coffee, this may not be your cup of tea. Moving past the poignant smell, its color is a bright and closely translucent copper, just a shade darker. A nice nearly white head endures. It tastes like a Starbucks' offering, with a burnt coffee taste dominating. The typical pumpkin spices are there in near perfect moderation. But, there's no pumpkin based body, so the nitro, that works best with more full bodied brews, is nearly wasted. Obviously, the ratings accompanied with this review indicate this isn't at all bad. It is more of a coffee beer than a pumpkin beer, so keep that in mind.

16oz can. Can bottom is stamped 'BEST BY 08/25/22'.
Pale gold colored body. Nitro opening leads to momentary cascade, which results in thin, but creamy, off white head. Lacing on glass follows down the body of the beer.
Aroma smooth cold brew laying over a sweet pumpkin spice taste. Smells creamy.
Taste is slightly bitter coffee mixing in with sweet pumpkin spice. The aftertaste turns more earthy, both with gourd and with coffee.
Creamy, mostly full mouth feel. Okay carbonation.
Taste variation of the Pumking series, with the nitro effect and the coffee addition. As a consolation the pumpkin is lacking, but there is a touch of pumpkin spice.

Poured into a 16 oz tulip glass best before 8/16/22 assuming it means it was canned that day this year. Pours a very attractive dark orange with a finger plus sticky white head that leaves some thin lines of lace as slowly settles into a thick layer of bubbles. 4.5

Taste follows coffee, pumpkin, nutmeg, vanilla, and a hint of cinnamon in the finish. 4.25

Mouthfeel is above average, creamy and smooth because of the nitro, maybe a little dry, and at 8.6% really easy going down on a cool morning. 4.25

Overall this is my favorite variant of this now and I hope they can continue to do the big cans when using nitro. I am a huge fan when they do the nitro on beers. Nitro Warlock would be awesome, hint hint, wink wink. 4.25

Appearance: It pours with what looks like an oversized head in a standard nitro-pour but what is really a medium-large head and a large cascade of inverted white bubbles. The cap is very creamy textured with a few sparse pock-marks on the surface. Excellent head retention. The body is amber with a lot of tiny suspended solids throughout.

Aroma: Coffee comes through at first, followed by toasted caramel and an aroma of creme brulee. A light vanilla scent is in the mix along with burnt sugar.

Mouthfeel: It feels light bodied and watered down with a wash across the palate with no carbonation presence. It is a nitro beer so it is to be expected but there is also this strongly bitter burnt character that fights with the rest of the beer. There is a smoothness that accompanies the lightness of body but it accompanies the sweeter flavors better than it does the bitter ones. The beer feels out of place.

Overall: The whole time I was drinking the beer I kept asking myself "where is the pumpkin flavor?." The can states that this is a "COLD BREW COFFEE PUMKING NITRO IMPERIAL PUMPKIN ALE" and somewhere in the mix they lost the pumpkin flavor and the pumpkin spice flavor. It has a bit of coffee flavor but even that seems to be buried under this burnt marshmallow and vanilla character. It's really a strange beer that heavily accentuates sweetness but also delivers an awkward bitterness. Normally the two work in harmony but in this beer they seem to fight each other like oil and water.

I have had many beers from Southern Tier and one of their better offerings was their Cold Press Coffee Pumking (CO2). This unfortunately doesn't come close. There seems to be more vanilla flavoring than there is pumpkin spice. The nitro element helps smooth out the beer but what is the point if it is loaded with acrid bitterness? It's worth buying if you're looking for an unbalanced treat but if you're looking for an expertly well-made beer this isn't it. Southern Tier appears to have dropped the ball this year.

Pours a clear deep amber color with a creamy vanilla nitro head. The retention is eternal, naturally, and the lacing is glorious. Smaller head for a nitro pour, but still a great looking beer.

Aromas of coffee up front, followed by squash, pumpkin pie, nutmeg, and a ton of cinnamon.

The coffee is much stronger in the flavor. Adds an interesting bitterness to an otherwise sweeter style of beer. Light pumpkin seeds, squash, vanilla, pumpkin pie spice, nutmeg and cinnamon. Surprisingly well balanced.

The feel is the typical nitro feel. Watery but smooth. Deceptively easy to drink.

Overall, this is a very good pumpkin ale. It's not one of my favorite styles at all, but this one is well-balanced from the coffee and the nitro is a good fit for this style.

Picked this up this 13.6 ounce can at the grocery store. Limited release so I thought I'd give it a try. Poured into a tulip gave a full creamy nitro head which lasted a long while. Smell was of coffee, malts and pumpkin spices with the taste following. Alcohol was extremely well hidden. Nitro produces a very easy to drink feel. Despite my initial qualms about this being gimmicky it worked for me.