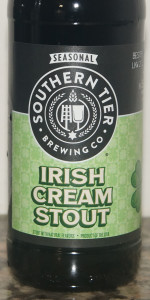 This one was worth trying once but it's definitely built more for Bailey's fans than for stout fans.

Reviewed by Steve_Studnuts from Pennsylvania

Two solid fingers of tan head over a dark brown body. Lil bit o' sticky lacing. I don't even have to stick my nose in there like a pretentious ass to tell you that this smells like my morning coffee (shut up buttbag Irish cream doesn't count as drinking in my home it just tastes good). Yeah, heavy irish cream on the nose to the point where it kind of obscures everything else. There's maybe an Oreo cookie note in there too. Smells real sweet. Taste underwhelms sorely. Irish cream thinned out with dirty 'ol garden hose water. Ick. Further sips are proving slightly better, but the mouthfeel on this is just a thin, watery mess. Zero heft. I'm sure there's a way to do this right (imperialized and aged in bourbon barrels?), but this ain't it.

4.16/5  rDev +13.4%
look: 4 | smell: 4.25 | taste: 4.25 | feel: 4 | overall: 4
Irish cream aromas abound from the start, which is wonderful. Thin light caramel head. Well carbonated, black
body with a dark chestnut sheen in the light. Decently full bodied but not syrupy. While it smells sweet, it is properly malty and bitter as stouts are, with subdued lactose. It is brewed with milk sugar but I'm not picking up on it as an entity discernible from the Irish Cream flavoring, and it's definitely taking a backseat to the roasted malt. The Irish cream flavor holds fast but it's like drinking a Baileys that doesn't mask the alcohol as well, cept the bitter here is from the roasted malts and not the alcohol per se. After taste of roast espresso. I overall enjoyed this one but it didn't blow my mind or anything. I would definitely have it on draft on a St. Patty's Day sometime.
May 20, 2022
Rated: 4.12 by DaveAhl from New Jersey

On tasting, fortunately not as sweet as the nose would predict. There is a nice roast and slight bitterness to cut through the cream. There is the feel of whiskey without the actual booze.

Mouth between full and medium, finish a creamy roast.

Overall, ST accomplished what it set out to do with this one. It's an okay beer, but I'm in no hurry to reach for another one.

Taste: Interesting. Reminds me a lot of cream soda. Upfront there is a milk chocolate and caramel taste, with gentle suggestions of cherry and brown sugar. There is a condensed cream / whipped cream / vanilla extract flavor to it somewhere in the middle. Ends on mildly bitter flavors of roasted malt.

Overall: Pleasant and interesting. Almost like a root beer or coffee liquor style beer. Not my favorite. Not horrible.

The beer is medium-bodied and surprisingly filling for its modest 5.8% ABV. The carbonation is just right.

It reminds me a bit of the old Samuel Adams Cream Stout but is much more assertive. A highly interesting stout which I will have to try again sometime.

Aroma: Moderate aromas of vanilla and artificial creamer upfront. Sort of turns into caramel creamer, chocolate, and hints of coffee. (3.75)

Flavor: Moderate flavors of caramel and creamer upfront before a bitter Irish Cream and coffee flavor in the middle. Some smooth chocolate off the finish with a mild bitterness. (3.50)

Feel: Medium-bodied. Low carbonation. Finish is smooth, slightly astringent from the Coffee and Irish cream, but then flat. (3.25)

Overall: This beer tastes pretty much like Irish cream, artificial caramel creamer, cheap coffee, and vanilla. All of the above. Not really pleasant, but drinks like Irish cream I suppose. Not great flavors. The body is flat without carbonation, and not getting much nitro here either. Wouldn't seek this one out again. (Final Rating: 3.52)

This one pours a fairly dark black color, with a small foamy head, and lots of lacing.

This is pretty artificial smelling (and tasting), with sort of cheap and sweey whiskey-like aromas, Bailey's, milk chocolate, and marshmallow cream.

I really wanted to like this, but it just feels thin and artificial. It just feels like some sort of Bailey's extract was added to a thin milk stout here. There's some chocolate, and a kind of weird off-brand sweetness.

This is light bodied, creamy, and not all that drinkable.

Reviewed by Pouringpro from Connecticut

The Label is Very Misleading!! The Words to me meant an Irish style Cream Stout.
The word Cream as in the Cream ales of years gone by, did not mean adding a bunch of chemical flavors to an ale! Or yo a Stout.

I understood after first unnatural flavored slug what they meant by Irish Cream “Stout”.
A polite way of saying you are trying to capitalize on the “Carbomb” drinkers.

Brew a stout and load it up with the flavor profile of a cheap Irish Cream Liqueur.
Bump up the alcohol content and you have created a dud Irish Car Bomb Stout.

So to Describe my tasting experience;
The beer explodes in your mouth, destroying your tastebuds. In a daze you sip again hoping you were confused by your preconceived notion that this was an Irish Stout on the creamy side. Wrong! It is a syrupy mess. Nice try though.

The key to the success of the now politically correct named “Irish Drop” Aka Carbomb was the great taste of the Guinness followed by the liquid ice cream shot of Bailey’s and Jameson’s ( note the original shot had Kahlua in it) . So Tasty.

But to have to suffer through an alcohol laden
Chemically created Irish Syrup Stout. Nope!

Well, I have to drink it so.... I will try adding a scoop of my Bailey’s, Kahlua and Jameson’s Ice Cream to it and hopefully get some enjoyment.

Note: the scoop of Bailey’s, Kahlua and Jameson’s Ice Cream on top of a pint of Guinness is called the “B.I.G. Float!
Bailey’s Irish Guinness!

So time for a Southern Tier Sunday Stout!!
Or just if like me you bought the 6 pack,
add Guinness to the STICS and it is actually drinkable.

Rated by RLowry315 from New York

Nose starts with Bailey's Irish cream, to the point of artificial like, very creamy, a hint of chocolate and roast, lactose milk sugar, but pretty much all Irish Cream

Taste brings more Irish Cream like Baileys but a bit less dominant than the nose, some bitter stout notes with a bit of roast and creamy chocolate, lactose sugar, some mild spicy hop bitterness, a little fruity note, a touch of a minty like character late probably coming from the Irish cream, getting more spicy hop bitterness with minty notes late, drier finish

Overall mixed, the nose was all Irish Cream which is OK if there is beer there but there really wasn't, taste had more balance so nicer but the spicy bitter hop on the finish was a bit clashing,

Reviewed by timgower from Massachusetts

1.64/5  rDev -55.3%
look: 3 | smell: 1.5 | taste: 1 | feel: 3 | overall: 2
If you like super sweet stouts with lots of obvious additives, this is for you. I found it to be like drinking a Thin Mint. The pour looks like a stout, but a soon as you take a whiff, you are in CandyLand. Taste follows: Strong artificial-tasting chocolate and mint. Overpowering and leaves a bitter, sour aftertaste. Not my thing.
Mar 17, 2022
Rated: 4 by BltByKrmn from New York

Notes via stream of consciousness: It's been so long since I've had Irish Cream that I doubt I'll be able to remember what it tastes like. This has poured a very dark mahogany brown body beneath an inch of creamy khaki colored foam. The aroma is sweetish, and... maybe like vanilla? It's unusual, and there's definitely more to it than vanilla but I can't put my finger on it. On to the taste then... it's interesting. There's definitely a chococlatey and lightly roasty side to it, but it's also got a lot of vanilla and some fruitiness to it. At this point the head has dropped but it's maintained a thin cap and there is some minor lacing left behind. I can tell that it's made with lactose but I'm not sure why. I don't think that I can actually taste it as much as I feel it. That's interesting because it popped right out to me whereas sometimes I don't even notice it. There's also some bitterness which I find a little odd because this one doesn't seem nearly as sweet as some of their other dessert beers. It finishes a bit harsh, dry, and herbal (minty) with a little bit of a spiciness, but no real spice flavor. That can't be alcohol, can it? How strong is this? It's just 5.8% so no, it's definitely not alcohol. I have to say that sometimes I like unusual and weird things in beer because they're intriguing but this is just distracting. It's pleasant upfront with some sweetness and chocolate and caramel, but then that unusual character comes on across the middle and then lingers in the finish. The label says that it's a "STOUT WITH NATURAL FLAVORS". Usually I don't mind flavorings but this one comes off as a bit medicinal, and I think it's too strong for the base beer that it's in. Despite the lactose it also seems a little thin for what it's trying to be. It's medium-light in body and gently crisp, and I think, astringent. That might just be the lactose on my teeth, but maybe not. In the end maybe I'm just not understanding it, but it's definitely not my cup of tea.
Review #7,801

Reviewed by Chickenhawk9932 from Pennsylvania

Baileys coffee and vanilla in the nose

Taste follows the nose. There is some bitter carbonation in the back, but this is a sweet mess.

Strawberry, mint & chocolate syrup flavors; it's very artificial tasting, but the notes are mild enough for this to not be cloying.

One is enough, for sure, but this is better than it has any right to be.