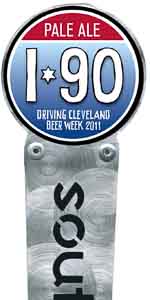 Reviewed by eskildow from Ohio

Reviewed by ClePaul from Ohio

S Nice basic floral hops smell with a bit of sweet malt. The floral hops seem to be balanced nicely. There is a certain peppery aspect to the smell as well. This is a good smell. 4.0

T Taste flows directly from the smell. The floral hops predominate, there is a faint malt sweetness but the taste offers something that the smell did not...the certain sense of barley malt husks. Taste is interesting but not mind blowing. 3.5

M Feel is beefed up by that peppery, hops taste but this is a translucent Pale Ale so the feel is probably moderate. It is appropriate to the style but just not that remarkable. 3.0

D/O Drinkability is good. I have not checked the ABV but it does not taste very elevated. Overall this is a safe Pale Ale, an appropriate selection to commemorate Cleveland Beer Week 2011 which is what it was meant to do. 4.0

Notes: I live and often drive up and down Interstate 90 (which is between Southern Tier Brewery in Lakewood, NY and Cleveland, Ohio) but I am not sure of naming a beer for a roadway (what with DUI and all).

Reviewed by dogfishandi from New York

pours out a very clear golden color with some nice white head that held some decent retention, thin layer. a little bit of some nice lacing on the glass.

in the aroma some tropical fruits, kind of dank raw pellet hops, and some citrus, maybe lemony. not a super intense hop aroma but fits the pale ale category. a little bit of a grainy aroma as well.

again, from the hops you get some tropical fruits, grapefruit citrus, a bit of lemon citrus, and a slight raw pellet hop flavor. a bit of grains try to balance. again, nothing intensely hoppy but it works for a sessionable pale ale.

mouthfeel is more towards the lighter side, lighter body. some hop bitterness in the finish, nothing really wrecking your palate however. just a touch watery at times.

overall, this is very similar to a lot of Southern Tiers other pale ales (pale, hopsun, mow master). same kind of malt and hop profile, only suddle differences between the 2. i wouldnt really seek this out again, but worth atleast one try.