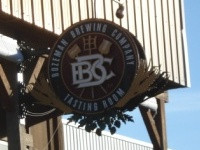 definitely a brewery cut from the old school cloth. its nice to go to a place and have known styles executed well and without a lot of frills. no reclaimed wood decor, no lemongrass or honeysuckle or pomegranate, no hipsters blogging about it, its a nice change of pace from what seems to be happening everywhere else right now. a small tap room space here attached to what appears to be a much larger production area, this place almost feels like a time warp. mostly old timers in here swilling pints, i enjoyed their pale ale as well as a coffee stout called buzz kill. these are relatively simple beers, but they are made well, and they are for drinking. the selection wasnt incredible, but they covered the bases, and everything i had was good. it didnt look like a ton of innovation in here, but thats okay. service was chipper and chatty, generous with the samples, and genuinely interested in whats going on here. they had an awesome looking bbq truck outside that looks like its here all the time too, i really have to hit that up next time in town. the beers here have stood the test of time, and for good reason. i will always be happy to drink a bozeman brewing beer! super mellow vibe here too, check it out!

edit: they seem to have turned a more modern and ambitious corner with their beer, or else i somehow missed it last time, but they now do affordable cork and cage bottles of unique stuff like barrel aged wild gose with apricots and black gose, among others, way more interesting than anything i have known from them before. i am stoked on these offerings, and recommend them, really tasty! maybe i spoke too soon about these guys being old school and limited in their brewing...

(#9 of 49) The brewery is located in an older industrial and residential neighborhood. The taproom is a small, cozy arrangement with a bar that only seats 8. There is table seating for about 40-50 people. We stopped here to try their beers, of which there were 10 available plus a cask IPA. It had been a long day and we wanted to limit our drinking because we had time for another brewery stop, so we chose a sampler flight of only 4 of the beers. Each was brewed to exceed the taste characteristics for the style so that we gave an overall score of a 4.0 out of 5. Most notable was the Maibock, and the Plum Porter and the IPA were close behind.

There is no food served here, however a food truck was parked outside, although it was not open and I did not ask about its operating schedule. We really liked this place and would retrun if we are ever in the area again.

Did a sampler, IPA was good but the porter was the standout here, a beer I regret not picking up in cans. Venue was packed, but service did not suffer. Not sure if food was available. Would love to visit again if I get back to Bozeman.

It is a fairly small bar/tasting room with about a 15' long bar at one end and a bunch of small tables throughout with a nice leather couch on the end opposite the bar. The atmosphere was great felt like a hometown hot spot but it was pretty chill and relaxing. Actually me and my buddy had two different dogs come over to chill by us by the couch. They have $3.50 pints of at least eight different pretty unique brews (that you can purchase 3 of by law). The most unique beer I had there was the belgian dubbel ale (9.8% abv), but all the others I tasted were good quality. It was a good experience and I will definitely be stopping in there again, maybe even often, from now on.

My first night in Bozeman included a trip to the Bozeman Brewing company to check out some of their beers, and I didn't know how they did things up in Montana ahead of time. Apparently they can sell three pints per night per person directly, or a growler fill.

The space was a little small but it is a small town, and they had 8 of their beers on tap, some of the regulars it seemed plus a few special releases. I did like the atmosphere of the bar area / tasting room a lot and they had a handful of tables with barstools plus some popcorn available.

The standards were quite good as well, and one of the real highlights was the fresh hop ale made from local hop varieties.

All in all a great experience and if I'm ever back in Bozeman I'll be stopping in to see what's new on tap. A must-try for any beer lover stopping through.

Stopped by while in Bozeman for a few days. One of the brewers was haning out behind the bar, and provided great info about their different beers.
I was really really impressed by the overall quality. I had an "imperial ipa" which I thought was absolutely awesome.
Their signature porter was pretty good...not bad, but a little unremarkable.
I had a stout on cask, which practically blew my mind. It tasted very "fresh" and had nice somewhat unique flavor.
I think the beers were only like 3$ a pint.
also you can only get 3 beers per visit and the hours are limited per some crazy MT brewery law.
There was a good crowd of people haning out inside.
no food, but plenty of free popcorn.
If in town, be sure to stop by.

Wasn't expecting much from this place actually, didn't look too impressive from the outside of the building. The inside however was nice and cozy, very cool pictures up on the wall to look at. Not much for selection when I was there, I believe that there were only 3 beers on tap that day, amber, hefe and unfiltered IPA. I went with the IPA which was very good, only had time for one beer while I was there. If you are in the area I would for sure recommend Bozeman Brewing, wish I could have stayed a little longer while I was there.

Due to the State of Montana's strict liscensure regulations for liguor/beer distribution, this brewery operates a "tasting room" which sells their beer for $3 a pint with a three pint maximum. You can purchase growlers of their beer there, as well shirts, pint glasses and the type. The "tasting room" itself is the front room of the brewery on the east end of Bozeman. The room has a modest bar near the front with several comfy couches, tables, games and a popcorn machine (I think they have a tv in there too)

The beers are truly exceptional. When I was there I tried their Plumb Street Porter, Amber, Hefe, and W.H.O. (which was summed up by Tyson the barkeep as a PBR with a kick, a fairly accurate description!). Their Hefe is very clean and crisp, without the skunky aftertaste that accompanies a lot of Hefes. The Porter is awsome too, as well as their Oatmeal Stout which is somewhat of a local legend. Todd, the owner and brewmaster is often there so you can share your opinions with him. The folks that work there are some of the nicest and more knowledgable guys I have met in a brewery. They really like what they do and aren't trying to sell you on the beer, they let the beer sell itself.

I enjoyed my three pint max while chewing the fat with the locals and barkeep. I got two growlers and went home a little buzzed and excited about enjoying more Hefe at home.

They are open M-Sat 4-8pm. I strongly suggest dropping in if you get a chance, you will be rewarded with a great beer tasting experience.

Bozeman Brewing Company in Bozeman, MT
Brewery rating: 3.86 out of 5 with 336 ratings