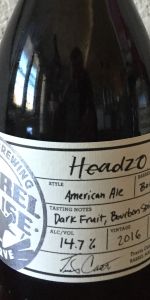 This one won't be for everyone. Dark fruit on the palate, especially prune, but also raisins and figs. Sticky and sweet mouthfeel. Once I got over the initial taste shock, I liked it better as I made my way through the glass. Could be summed up as 'Barrel-Aged Dr. Pepper.'

i agree strongly with the other reviewer here in that this ranks among the most complex and interesting beers ive had in a long long time. to call it a mere barleywine does it no justice. this is a barrel aged monster, super boozy like fuel, but also extraordinarily nuanced. lots of barrel and dried fruit in the nose, vanilla whiskey and oak, char, and raisin, plum, and fig. even a red wine aroma here too. sweet like molasses and brown sugar, made longer by the booze and the sludgy body, red apple, candy sugar, maple, just so much going on, but its oddly rather seamless and seem insanely well calculated and dialed in, for being such a kitchen sink cornucopia of flavors, it just all seems to work really well. best at room temperature, where notes of sherry and port come out, heavy wet musty old oak, berries, toffee, bran muffin, bread yeast, booze. this bottle needs a buddy, a brisk winter evening, a roaring fireplace, and even a robust cigar. a beer of absolutely astounding depth, i bet this will age indefinitely. i had no idea drakes did this kind of thing, i thought it was all hoppy stuff! amazing beer, almost beyond beer all together. not to be missed!

Caged/corked 500ml bottle poured into a BCBS snifter. Bottle is numbered 338/444. Batch #2 clocks in at a "modest" 14.7% ABV compared to the 18% of batch #1. This batch still maintains the complex mix of dark fruit, bourbon and port - all playing for attention from the palette. Still one of the most deeply complex beers I've ever had.