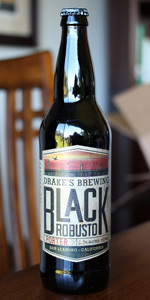 Notes: A robust Porter, Drake’s Black Robusto has a roasty character and is stronger in alcohol than a regular porter (thus “robust’). Dark black in color with chocolate maltiness from seven different types of barley and spicy herbal hop character from Northdown and Williamette hops.

Not a connoisseur but love tasting beer. Darks are my favorite. This was a simple lovely pleasure. It is exceptional for its successful perfection of a porter, bringing about the malty chocolate flavors without adding chocolate, if I read it correctly. That's quite a feat, and courageous, too given the ease with which one can add chocolate and coffee and whatever rather than coax the flavor from the natural ingredients. And it was reasonably priced considering the quality.

A: The beer pours almost black in color with a finger of creamy tan head.

S: The nose is almost all roast and ash. Some notes of dark, bitter chocolate are also present, and some coffee and coffee grounds. Maybe a hint of licorice. Not terribly complex, but quite nice.

T: The flavor is fairly bitter from all of the intense roastiness. Quite a strong ash and char flavor with some dark chocolate and coffee. Somewhat astringent and slightly acidic as well.

M: Medium in body and carbonation.

O: I liked the nose on this quite a bit, but the flavor fell short and was just too heavy on the burnt flavors and bitterness.

Appearance - Pours near black with a tan, finger width head. Sub-par retention, leaving behind a thin layer of microbubbles on the surface and around the edge of the glass. Lacing is minimal and spotty, with fair stick.

Taste - Follows the nose. Moderate chocolate sweetness, met with undertones of baker's chocolate and coffee bitterness that rides out to the finish.

Mouthfeel - Medium-bodied with moderate carbonation. Smooth from start to finish.

Overall - Very approachable porter. It might not quite satisfy the geekiest of dark ale aficionados, but there's enough here to respect it. By that same token, I think anyone getting into porters would find this rich, but not overwhelming. When all's said and done, however, I myself would rather pony up for a Black Butte sixer at nearly half the price per ounce, which to me is not only the better beer, but obviously a far better value.

Aroma of dark roasted malt greets the nose. Pours very nearly black in the tall tulip with a fine beige head. Lots of lacing in the glass and quite sudsy in the mouth.

Flavor is kind of like slightly burnt rye toast. Good, though. There is just a lot of the charred flavors and a touch of burnt sugar. A little sweetness makes this more malty and less dry than a lot of these black beers. It just makes up for it with a longer, more bitter burn at the end. Warm yet edgy, a lot of grainy flavors, and that deep roasted taste makes for a mouthful of flavors.

Thoroughly refreshing and intriguing dark brew. Another example of the slightly off-center style that makes me a Drake's fan. From the 22 oz bottle bought at Bine & Vine in San Diego.

Pours two fingers of tan head on a black body.
The aroma is rich roasted malt, chocolate, a little burnt wood and milk. Excellent.
The taste burnt, roasted malt with some chocolate to smooth it out. It stays on the roasty/bitter side.
The texture is softer with low carbonation.
Nicely done.

Poured from a bottle into a 16 oz glass. Poured aggressively, creates a thick three finger head that you will be tempted to drive a truck over. Heavy lacing, and a beautiful dark chocolate color. Aroma is magnificent once you let this ale warm up a bit, which I recommend for porters and stouts--deep and inviting. Flavor is substantial, dark roasted malt, coffee, a bit of molasses, some sweetness from the malt, smokey darkness, and moderate bitterness of hops. Mouth feel is thick, a bit creamy and chewy. Overall this is an outstanding porter, which I am adding to my favorites.--updated, DS

A: Pours a thick near-black cola color with a huge, dense, dark brown head that took forever to fade into a greasy film that left patches of soapy lace down the glass.
S: Rich and roasted overall with scents of barbequed meat, dark chocolate, mild coffee, oats, molasses and toasted grains.
T: Follows the nose with dominating flavors of roasted grains, BBQ, chocolate, and brown sugar. The finish is full of roasted nuts and the aftertaste has a hint of molasses and toasted coconut.
M: On the thinner side but a very smooth mouthfeel and easy to drink. Medium full body but just a tad watery.
O: A roast-forward porter. Slightly thin but amazing flavor. Definitely recommended.

This pours a dark black with some light foam. There’s a great roasty aroma undercut by a lightly handed smokey note. The flavor is well rounded with a roasty dark coffee characteristic and just a touch of the smoke. Another solid selection from Drakes.