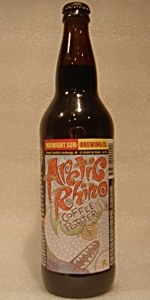 3.9/5  rDev +4.8%
look: 4 | smell: 4 | taste: 3.75 | feel: 4 | overall: 4
The appearance was a dark brown almost black colored body with a finger and a half white foamy head that clings a bit with the lacing left behind. The smell had a nice strong roasted coffee powering in front of a light bitter hoppiness, some light malt coming through as it warms. The taste was mostly bitter but balances a bit with a decent malt presence, coffee aftertaste, dry finish. The palate was about a light to medium, somewhat sessionable for an American Porter. Carbonation seems a bit stronger than most American Porters I’ve had but not overbearing. Overall, this was a pretty good American Porter that I would have again.
Jun 06, 2017

3.47/5  rDev -6.7%
look: 3.25 | smell: 3 | taste: 3.75 | feel: 3.5 | overall: 3.5
It'd be more apt if this dusky Midnight Sun offering were just named 'Midnight'. But Arctic Rhino does have carbonation that charges like an angry safari animal; eventually the brown foam calms down, settling into what we'd consider an average size head, but the bubbles themselves persist in ramming into the surface and butting themselves against the glass.

This porter doesn't smell nearly as deep and dark as it looks. In fact, the aroma is a real disappointment. There's very little coffee and/or chocolate presence, instead there's a distracting vinous and fruity yeast character in their place. It's most uninviting and, I'm guessing, unintentional (the way the foam continues to build up in the bottle I'm almost certainly right).

Fortunately that issue with the yeast hasn't completely ruined the taste to the extent it has the bouquet. There's still a good deal of velvety milk chocolate flavour (as well as some more crude, less refined dark cocoa notes) and no shortage of roasty black coffee. Even a few earthy hops can be made out, lending a pleasantly crunchy bitterness to the finish.

As a general rule I opt not to review infected or otherwise flawed beers unless the brewery is a repeat offender and the issue was something avoidable they consciously neglected to address. I think Midnight Sun is a pretty good brewery but it's not the first time I've purchased a less than stellar bottle. In fairness, the beer travels very far before it lands in front of my computer...

So I've got mixed feelings writing this review of Arctic Rhino. On the one hand, it's far from the lush, charismatic coffee porter I was hoping for; on the other, it's in line with the slightly underwhelming, 'good-but-not-great' standard I've come to expect from Midnight Sun. It's worth grabbing a bottle... so long as you don't have to freeze your buns off to get it.

Reviewed by Jeffsta1 from Washington

3.98/5  rDev +7%
look: 4 | smell: 4 | taste: 4 | feel: 3.75 | overall: 4
Decent looking dark brown color, tan head. Could be a bit darker, but it's a porter, not a stout, so - ok fine.
Smell is nice, clean, sweet, malty. Cocoa and hints of cinnamon.
Taste is very decent. Again, malt. Some licorice. Hints of cocoa.
Mouthfeel is ok. Carbonation is overly done, but isn't super fine. This might be nicer on nitro.
Finish is consistent, not overwhelming in intensity or quality.
Overall this is a pretty decent porter. In a world where so many porters fail, this doesn't. Bonus that it's only 5% ABV; it feels and tastes bigger.

Rated by Trentt2 from Alaska

Reviewed by BenGap from Alaska

Reviewed by 303beer from Colorado

Reviewed by Thirstygoat from Illinois

Coal dark with a fast departing mocha head, the lacing slides down the sides pretty quick.

Smell is dominated by coffee,

Taste, mostly coffee, with not much malt, still looking for the hops

To me mouthfeel defines Porter v Stout, this is chewier than some stouts but fairly branded as a Porter

It is nice to ave a beer with flavor/body that is low enough abv yo finish a bomber easily, good stuff

Reviewed by Grant_Satterthwaite from Alaska

4.85/5  rDev +30.4%
look: 4.5 | smell: 5 | taste: 5 | feel: 4.25 | overall: 4.75
This beer is fantastic. I remember the first time I had it in the summer of 2014 it opened new doors for me and ever since I've preferred porters and stouts to all other beers. Great look, pours heavy and dark with a brown foamy finish. Tastes like the coffee beans it's brewer with. The fact that the BA score for this beer is 84 is misleading because this beer is amazing. I highly recommend it to anyone who likes coffee flavoured beers.
Mar 24, 2015
Rated: 3.51 by HoppySeb from Washington