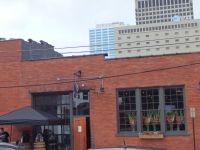 Notes: Around the corner from the Wolf's Ridge Restaurant/Brewpub is the taproom on Hickory with more taps, a bar food menu, and bottle sales.
PLACE STATS

View: Place Reviews
Reviews: 4 | Ratings: 20 | Log in to view all ratings and sort

Really enjoyed nearly everything about this place, except the bill. Ouch. And this was in the tap room. Couldn't imagine the damage the real restaurant would have done.

Anyway, good service, great beer, and great food. I had a sampler with two variations of the cream ale. Really enjoyed that one. Enough that I got a full pour of it after the sampler.

The community seating was nice. Talked to a few others during the 2-3 hours we were there. Can't remember exactly, but I recall we had to seat ourselves, which is always a bit awkward. Slight turn-off.

Place was crowded on a Friday evening. Lots of people having fun and enjoying beer. Acoustics could've been a tad better, but it was far from the worst given the crowd.

The place had about 15 or so beers on tap, with a nice variety ranging from cream ales to imperial stout, with quite a few other offerings in under-represented styles like Vienna lager and a variety of the aforementioned cream ales. I'm to understand it might not be uncommon to have a couple variants in their tap list.

Service was friendly but on a hectic night, got a slight bit slow. We were having good conversation so it wasn't too big a deal. Overall, I'd love to return on a less busy night and just relax with a few more of their beers.

This much more casual space is a stark contrast to the front restaurant, and mainly consists of an open, communal and standing atmosphere, with fermenting tanks right next to tables and load and loads of taps to choose from, as opposed to the brewpub, which has just a few. Their beers are top notch, high quality, well balanced and varied, but it's not always easy to come by their Dire Wolf unless a special release happened recently.

They also have recently added a separate food menu from the brewpub with their own kitchen, which is closer to bar food but still elevated relative to other breweries, yet not quite as fine as their brewpub menu.

Bottle sales are often available as well, and they are pretty good at handling fairly busy bottle releases--although, if they get any more popular, they may have some problems.

I stopped in at Wolf's Ridge before the NHL All Star game which also happened to be the grand opening of the taproom. I checked online and was happy to see that they opened at 10am. I walked in about 10:45am and the restaurant was packed. I inquired about the taproom and was informed that it did not open until noon. I nursed a Zane's Trace until the taproom opened.

I was immediately pleased with the taproom. It seemed more spacious than the restaurant and offered more of a variety of beer. A friend met up with me and we set into sampling some of the taproom's initial offerings. I decided to start out with a sampler consisting of Dire Wolf and six variants. I like most of them. The Mexican, coffee, and both barrel aged versions were great. I also tried several other samples afterward but none stood out like the Dire Wolf variants.

There is a limited menu in the taproom consisting of mainly snacks. My buddy and I tried the homemade potato chips and pork rinds. They were pretty good. I really wanted to eat up front but my friend was financially challenged, so we stuck to the back.

Overall, the workers were very friendly, and I had an enjoyable time with some good beer. It never really got busy, but it was the Sunday of the first weekend they were open. I do not anticipate it being that slow on my next visit. I was happy with my experience there and will make it a regular stop before Blue Jackets games because it is a few blocks from Nationwide Arena and most people are too lazy to walk a couple blocks for anything. Hopefully, it will be a less crowded alternative to Barleys.