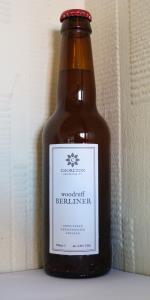 Notes: None
View: More Beers
Recent ratings and reviews.
3.7 by hdtrice from England on Dec 07, 2015

Look: Slightly murky dark gold/orange with a fair amount of haze despite careful pouring. A lot of fizz initially, but settles down to something rather flat looking once the head has disappeared. Not that there was much of that to begin with.

Smell: Not a whole lot going on - there's a vague medicinal fruitiness but not a lot else. There's an unusual muskiness too, but it's not unpleasant - perhaps that's the woodruff?

Taste: Again, not a massive amount going on here - it's slightly medicinal with a hint of sourness and a side-order of hops. I suspect there's a whole bunch of flavours struggling to get out here but none of them seem to manage it.

Feel: Not too bad for something that's 'only' 3.8% ABV - whilst it looks a bit odd, it's surprisingly refreshing once you get past the medicinal overtones.

Overall: Not bad, but not brilliant - an interesting addition to Chorlton's range of sours and fairly interesting as a Berlinerweisse goes but other than that it really doesn't have a lot going for it. It doesn't help that what flavours there are are somewhat muted and the one that does dominate is (presumably) the woodruff which results in the slightly medicinal taste. Worth a shot if you run across it, but not worth actively hunting down.

This looks flat & hazy
It smells like honey & Citrus & slightly musky
There is a herbal medicine quality to the taste, a little bit of Citra, ends with an acidic twist
quite watery but then again it's only 3.8%
It's not totally flat though

Woodruff Berliner from Chorlton Brewing Company
Beer rating: 3.7 out of 5 with 4 ratings