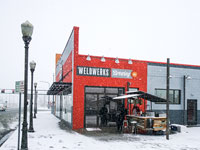 WeldWerks isn't in the nicest area but it's worth a visit. About 20 miles east of anything else worthwhile in Colorado, WeldWerks makes amazing beer and has developed a following.

Extra Extra Juicy Bits is a GABF gold medal winner and in the top five hazy (D)IPAs I've had. The regular Juicy Bits, the Achromatic and Medianoche stouts, and their fruited berliners are also stellar. Some of their stouts are too sweet, but their best beers are 10/10.

The brewery itself is nice, with modern touches, group seating, and board games.

Trendy hipster-ish brewery in open steel framed building with cathedral ceiling that makes the place feel massive. Rustic L-shaped bar in the left corner, partitioned off the brewhouse, half seats (8), half service. A dozen varying sized tables on the floor as well as a counter seat along the front window, and a covered patio with picnic tables on the right side. 20 plus well-assorted beers on tap, I had the Juicy Bits and the Fake Item Box, both were very nice. Friendly, efficient service, and a shuffleboard table. Fun place.

weldwerks has good beer. They are currently doing the trendy sugar bombs, Hazy beers, etc. The beer is good, but sometimes I feel it is overrated compared to my tastes. That being said, they make some good beers.

Nice brewery close to a local college so tons of youngsters hanging out. Nice little food truck outside with some killer nachos. Beer was TOP NOTCH and selection was insane. If you go to Colorado it's worth the drive outside of town.

Nice brewery with a large taproom and plenty of beers to choose from with representation from a broad range of styles. An abundance of NEIPAs with flag ship Juicy Bits leading the way. Bartender, Joseph, made great recommendations and was very nice in explaining many of the brews to us and even offered samples of a few he knew we needed to try!

Weldwerks definitely lifts the town of Greeley up several notches, don't miss out if you're nearby!

A wonderful place where they are very caring of the patron and truly trying to also help the community. Moreover, this place makes absolutely kick ass beer!!

Made the trip on a Tuesday. FYI they open at 2 on Mon & Tue, noon all other days. The space is pretty cool, nice outdoor area and a spacious bar. Went to get cans, they were out of a couple from the previous Friday release but had several left. Awesome server was generous with the sample pours. Had a Marshmallow Melo tap which was awesome. Very Impressed. Worth the drive from Denver, its an easy one.

Nothing out of the ordinary in this brewery....I probably would have loved this place 5 years ago, but quite honestly I have been to this place 20x already. Nothing exciting, kinda been there....done that. Beers were decent, but IMO I would suggest sticking to the stouts. Doubt I would visit again, unless I was in the area again. Denver beer scene is too strong to go out of the way to visit this one.

i have been meaning to make it up here for awhile now, and am really glad i finally did. this place is great. i was not sure they would have any of their cool stuff on offer, but i was wrong and they did, a couple of pastry stouts and a few heady ipa variants, i was very pleased with the selection in here. cookies and cream achromatic was an absurd beer, but a standout for sure, and the german chocolate stout was similarly intense but delicious, they are doing great work in those flavored stout styles. the space is cool, a bit of a mission from the highway, but worth getting to. i was surprised to see it so mellow given all the hype around their beer, but i guess thats greeley. their taproom is large, with a right angle bar that has plenty of seating and a lot of tables around the place, high and low, as well as a decent sized patio that opens out to their parking lot, over 100 people could easily be hanging out comfortably here. the decor was sort of generic, but the beer is unique and exceptional. service was good, quiet but generous and i enjoyed the professionalism of the dude behind the bar. its also cool how much beer they sell to go, crowlers and cans already filled and ready to take, and the list was long and exciting. prices were a little high, but that comes with the territory. overall my visit here was well ahead of my expectations, i was stoked to see so many cool beers available in here, which is not at all what i thought it would be like. good for them for not saving all that stuff for special releases and whatnot. ill be back no doubt! greeley is blowing up from a beer standpoint...

definitely out of the way from Boulder (or Denver for that matter) but their beer is well worth the trip. Have only made it up there once, and the space is nice and big. Service was great. good explanations and details for all their brew. offer tasting flights, which was nice. There beer is definitely the best I have tried in Colorado so far (moved here from NE 2 months ago, and this beer reminds me of Boston's Trillium). I don't know if they still do this, but when I went it was a Tuesday, and they had a $2 off crowler deal on tuesdays, which was nice!

The drive to Greely lacks the beauty of most of CO but when you make it to WeldWerks, you're rewarded with fantastic beers. I was picking up crowlers for a weekend get together in Denver. Well-done, clean, open facility. Had some solid food truck food and samples of the hazy beers. Took some accepted grief from the bartender when I asked him the hoppy wheat was good (it was fantastic) and I only got $145 worth of crowlers when I was pestering him about limits. All in good fun.

Great beer here. Was busy on a Tuesday afternoon because crowlers were on sale. Every beer I tried was well made. Nice building with a decent amount of seating. Worth your time to visit.

(Update 11/2018)
Weldwerks has quickly become one the best brewery in the entire state of Colorado.

Vibe- modern, simple, spacious. High ceilings and relaxed seating.
Quality- some of the best beers in the state, I have yet to have a bad beer from them.
Service- staff is very knowledgeable and friendly. Only knock is sometimes you have to wait a bit to get your beers.
Selection- they brew a killer Heffeweizen, IPA, and stouts. They have Goses that are great, and they are working on sour beers as well. Between BAMA, the Achromatic series, and the Juicy Bits/Fruity Bits IPAs, and Medianoche variants, they have all the bases covered.
They usually have 20-30 different beers on tap - which is stunningly high for a brewery. No one in the state does Berliner Weiss or Gose as well as they do. No one else in the state does Milkshake IPAs as good as they do.

Weldwerks is a must visit due to that unmatched quality and variety of beers that they offer.

V-WeldWerks is located near downtown Greeley in a big, newish building. The taproom is bright with lots of windows and a nice high ceiling with plenty of floor space to move around. The brewing equipment is in back of a big bar, and there is a medium sized patio on the parking lot, as well. When I visited in the late afternoon on a weekday, the place was quiet -- just a few tables were occupied -- and the brewers were working on things behind the bar. Not terribly pretty to look at or unique, but it is a perfectly fine place to pull up a stool.

Q-I tried two beers during my visit and I had to had one more prior to stopping in. The cherry gose was good, but the new-school, New England IPA and the BA stout that I have had from these guys are downright great. I wish that I could have tried more beers my during my visit.

Ser-The bartenders weren't terribly interested in me, so service was a touch slow, but they were friendly and helpful. Pours were in proper and in the correct glassware.

Sel-If I have a knock on WeldWerks it would be the limited selection on the day I visited. Just four beers were on tap, two IPAs, a gose, and a pale. The beers were seasonally appropriate, but I could have used at least one malty beer to mix things up, and only four taps is pretty slim pickings these days.

O-Notwithstanding my minor quibbles with service and selection, the beers here are really (really) good. I don't know that I would drive from Denver to Greeley for a special trip, but if you're in/near Greeley, this place is definitely worth a stop.

Greeley's downtown is going through a rebuilding phase. Just by driving around, you'd never guess that almost 100,000 people live there. But it's still clear that they're trying, which is more than I can say about a lot of midwestern towns. There's a cute art theater, nice parks, some decent restaurants, and then just a little ways down you got WeldWerks.

The building is conspicuous and very easily accessible from the main road. The tap room was either built from the ground up or else heavily renovated, and it has the same well-lit, faux industrial feel as a plurality of contemporary breweries. No knocks against it, but the feel is nothing special.

The beers are all solid. They don't go for any extreme styles but they're also not particularly conservative. They are a new brewer, hip to current trends but without the immediate resources to barrel age everything or place an order at whatever creepy bacteria warehouse people use to buy brett.

Uhh.. that's it. I don't got much to say. They weren't mindblowing, but everything was nice.