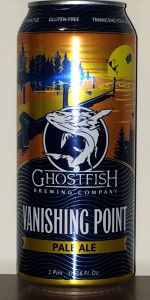 Notes: For our take on the classic American pale ale, we decided to throw inhibition to the wind and jump in with both feet. With several types of artisan gluten-free millet & rice malts, and four varieties of Washington-grown hops, one sip will make your preconceptions about gluten-free beer Vanish into the great beyond!
View: Beers | Place Reviews
Reviews: 7 | Ratings: 21 | Log in to view all ratings and sort

DATE: October 22, 2020... OCCASION: easing into the weekend with a solid gluten-free offering... GLASSWARE: Stoudts pint... this pours with a storm of swirling bubbles building, then settling into a roiling thinness of off-white bubbles... its copper amber body is rather clear and attractive... first whiff is sharp with millet and brown syrup, dank hops that suggest orange and lemon, lilac and honey, and light cracker... its body is reasonably vibrant, bubbling with a creamy head and a thick, pleasantly lively finish... it's chewy and appreciable, yet at 5.3% it is more than drinkable... the flavor profile is a tough balance--on one hand, the citrus and dank hops are appreciable enough to be enjoyed; on the other hand, its sweet syrup and millet borders on cloying.... the flowery aspect works, and knowing this is gluten-free raises my estimation of its quality... both Ghostfish products I have had are solid approximations of their malty counterparts...

A: The beer is slightly hazy amber orange in color and has a light amount of visible carbonation. It poured with a half finger high frothy off white head that left a large patch of bubbles on the surface and a collar around the edge of the glass.
S: Light to moderate aromas of caramel-like malt extracts and toffee are present in the nose along with hints of citrusy hops.
T: From start to finish, the beer seems to have a sorghum-like taste that overshadows the underlying flavors of caramel and toffee. There are hints of herbal hops and a light to moderate amount of bitterness.
M: It feels light-bodied and a touch watery on the palate with a moderate amount of of carbonation. There is also a bit of crispness.
O: The taste of this beer reminds me like sorghum and seems a bit rancid but isn't that bad for a gluten-free beer.

I had this beer on-tap in a pint glass at the brewery.

Appearance: medium gold with just a touch of haze and a strong effervescence. Head is a thin layer of fizzy ivory foam.

Smell: lightly tart with citrusy, earthy hops; it's a bit too light and nondescript for me.

Taste: a little bit tart and a little bit chalky. Hop character seems to be a bit citrusy; I would guess that this is a sorghum beer. I actually find it pretty successful, considering its limitations.

Mouthfeel: medium body with a good carbonation and creaminess. Actually quite pleasant!

Overall: a pretty drinkable gluten free pale. I've had some dismal GF beers, and this one is delicious compared to those.

Hazy gold with one half inch of white head. Light rings of lace.
Bready malts.
Taste is mild floral hops with bready malt and phenols.
Mouthfeel is light with good carbonation.
Overall a strange beer. Different for sure.

Hazy yellow color with a modest foam in the tall Pilsener glass. From the 16 oz can purchased at Elizabeth Station in Bellingham.

This tastes like beer at first sip with a very light cereal taste. something like cream of rice. Then the bitterness envelopes your mouth and I am looking for somewhere to spit. The bitterness continutes to burn long after you're swallowed, reluctantly. The finish is a little sourish. There really needs to be a category for these low-gluten concoctions. I suppose a person could develop a taste for this stuff, but it's unfair to rate it with actual Pale Ales.

16oz can poured into nonic. Poured a hazy-lightly cloudy straw yellow color (almost Hefe-ish) with about 1/3 inch of white head that had moderate retention and lacing.

The aroma started a nice earthy grain, that clearly isn't your typical barley. Upon reading the can, it's millet. There was an earthy hop scent as well. This brewery only makes Gluten-free beer, so it's to be expected. The grain taste of the malt is nice, just different. The hops were a bit brighter presence on the palate, but there was a slight funk at the back end.

The body was pretty typical for the style, perhaps a touch heavier than average, but so much that it detracts. Drinkability was OK, although, I'm a bit of a struggle with it. Overall, not a "bad" beer, but probably not one I would very often choose. Probably worth a shot if you see it, but likely a one-and-done for me.

A – Pours a bright amber in color with a thin white head.

O – Smells okay, tastes of an odd mashbill and a lot of random grains.

Vanishing Point Pale from Ghostfish Brewing Co.
Beer rating: 80 out of 100 with 21 ratings