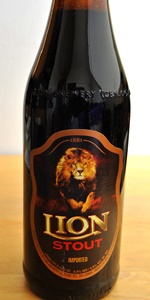 Notes: The dark caramel, large dense headed brew, with its 8.8% alcoholic content, is unique due to its sweet notes of chocolate and coffee interspersed into a foundation of dark roasted barley. Symbolic black to denote leadership, power, focus and strength, is dominant in the labeling as the lion journeys in the twilight unafraid, unbowed and unchallenged.
View: More Beers
Recent ratings and reviews. | Log in to view more ratings + sorting options.

Purchased at Beer 360 in Richmond, a suburb of Melbourne, in Australia.

A jet black beer with ruby highlights where the light reflects from the glass. Head is tan and thin, yet persistent.

Aroma is mild with maybe the slightest hint of sweetness. I expected more.

Taste is salty, dark, sweet chocolate. There's some lightly burnt caramel in there too. Alcohol warmth is pleasant.

Mouthfeel is silky smooth and exactly as imagined when looking at the beer.

All in all, this is an excellent beer.

Pleasant surprise. A local deli carries this in four-packs in my neighborhood, which is something of a beer desert. Very solid stout - nice and boozy with coffee, salty chocolate, and earthy notes. Drinkable and interesting enough to keep your tastebuds dancing.

Well, this beer was easy. This was a really good British Stout, at a perfect balance between sweetness and mildness, smoothness and caramel/chocolate/coffee tones. Quite some booziness in the flavor (8.8% it says), but nowhere and of the usual twisted roasted malts, just a pleasant taste instead, like a dessert.
This was perhaps the best traditional (British) Stout I have ever had.

A nice powerful stout on the sweeter side. The flavor is slightly different from other strong stouts, but I found it very pleasant for sitting outside in the evening, despite generally looking higher IBUs. Very smooth drinking. The only discernable negative was that the head got really big fast but didn't remain.

Bottle completely fixed over upon opening, and I lost about an ounce or two of beer. Pours a deep stout brown, sitting black,in the glass, with three fingers of dark brown head that quickly recedes to a thick cap and collar, leaving considerable lacing. A nice looking stout, despite a violent start.

Nose: Deep roasted barley malt, bringing notes of chocolate, coffee, dark fruit, cinnamon, walnut, as well as a strong metallic aroma. There is some unique subtle spice character beneath everything.

Palate: Deep roasty flavours set the stage in a typical stout format, with that unique spice character being front and centre. Nutmeg and cinnamon. There is a round, caramel-like sweetness to it, but it stays relatively tame. It's not overly sweet, with the roast bringing a dryness, and some typical cocoa and coffee bean notes, with the mild roasty bitterness peaking about midway through. Not nearly as much metallic flavour as the nose would suggest. There's some round nuttiness, giving way to some tangy dark fruit notes, just before the finish which once more emphasises the charry roast. It's fuller than I expected it to be, with a strong delivery of flavour and no watery weakness.

Mouthfeel/Body: The beer is on the fuller side of medium bodied. It isn't a small beer, considerably thicker than a particular Irish stout, with a little bit of texture to chew on. At the same time, it isn't a massive beer, and doesn't feel as full as an Imperial Stout - which it shouldn't, because it isn't one, but it isn't terribly far off. Not a thin beer. It's satisfying for 8.8%, yet doesn't put up a fight, either. Could potentially pair with food, especially dessert, but is in no way a thirst-quencher.

Overall: It's a simple stout, with some unique flavour characteristics to be found. It isn't particularly exciting or exotic in any way, but there isn't much to complain about either. It's enjoyable for what it is, with no glaring faults or flaws. A fair choice for someone looking to switch it up every now and than.

Lion Stout. Brewed in Sri Lanka. Poured from an 11.2 ounce bottle and have no idea of the bottling date. Color is just about pitch black with a half finger of tan head. Aromas come out with molasses and sweet malts. Taste is sweet with raw sugar, light toasted malts and a bit of dark fruit. Mouth feel is lightly sweet and not too thick or coating. Finish is of slightly caramelized sugar. The complexity is lacking but this is definitely a better stout than is brewed by other third world countries..

L. From 330 ml bottle into tall glass. Black/dark brown body and tan, frothy head to 2 inches. Head subsides to about 1 cm cap and lacing. Bottles I have are differently branded to that shown but seems to be the same beer. S. Always a weak point with me. Maybe some coffee/blackened grain. T. The smell amplified, dark grain and coffee and a faint, smoother, creamy taste/feel on the back end. Also notice the alcohol power on the back end and after a few! That power also adds a cough syrup hint. Not much sweetness, dry, lingering coffee finish. F. Smooth, not overly carbonated despite the initial pour. Slightly creamy finish. O. Very good, somewhat exotic stout. On the light side, but that isn't surprising given its origins. 3 Dec 2019 upped my ratings slightly after drinking one recently. Very good stout.

Look: Pitch black and completely opaque. Half a finger of creamy off-white head.

Overall: A strong showing from a country that traditionally wasn’t exactly a stout producer!

Sipping on a Lion stout while watching the sun setting over the Indian Ocean on the East Coast of Sri Lanka might be one of the most out-stoutic experiences I've had.

Pitch black pour coupled with a taste of dark malt, burnt coffee with a faint condensed milk after taste. Mouthfeel is above average, however the classic stout taste holds court with this beer.

This is definitely a solid stout especially at this price point of around $2 a can. The taste is solid although the finish is weak. Either way definately recommend for stout on a budget.

Malt in all its glory. Nothing fancy, no adjuncts, just malty, dark-roasted, bready, earthy goodness. Nice chocolate and espresso notes on the nose and tongue, with a lovely, lingering bitterness and faint sweetness. Really a rock solid stout.

A little disappointing considering the great reviews and reputation - I found it to be overly sweet. Looks nice, dark almost black color with some fluffy head that slowly faded and some spotty lingering lacing. Smells of roast coffee and a little chocolate and caramel. Tastes similarly, except with some vanilla, biscuit and malt as well. Just a little too sweet for me - not cloying but close. Smooth mild mouthfeel and decent carbonation. Alcohol taste is well hidden, though.

The aroma hints at a very well roasted and sweet malty beverage with an odd Play-Doh like thing going on in the background. The flavor hits right away with big roasted malt, chocolate, coffee, toasted bread and then its sweet caramel and malt syrup takes over. Deep into the finish I get just a hint of earthy, almost leathery hops trying to add another level complexity and some balance. Overall it remains on the sweet side but in a good way.

Very dark, almost black, the heard is a creamy tan froth. rich aroma. very tasty; the mouthfeel is what really makes this stout standout against others I've tried. I haven't tried a lot of stouts, but this is the by far the best so far.