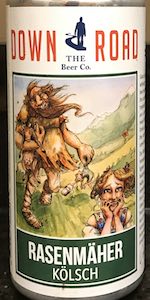 Pours a nice golden color with a light haziness. Not much head or retention. The aroma is yeasty floral and grassy. Taste biscuits grain with hint of lemon. Strong bread or crackers taste. Gel is light & crisp. Very enjoyable.

Crystal clear with a gold color. Moderate head with light spots for lace.

A bit grainy with a strong pale malt flavor. Little hop as expected.

Pale malt start with a little graininess. The hop is muted with a bit of earthiness. Full bodied for the style. Low carbonation. Overall, an easy drink.

Pours hazy, orange-yellow in color with 1/2 inch head. Taste is pilsener malt, grass, orange, and sugar. Nice light, clean and refreshing. Very traditional kolsch. Very good, I will get this one again.

Caveats - this is my first Kolsch; drinking this out of season for a beer that would probably be best enjoyed in summer; I do not own a stange, so using a pils glass.

Very nice and different. I definitely see this as a refreshing variety to a well-stocked summer beer fridge.

Taste: A fairly smooth mouthfeel with only a wisp of crispness. Pear, wisps of lemon zest, light nutmeg, golden raisins. Twinges of cinnamon and clove in the tail end.

Notes: Quite a tasty brew and a very good example of a Kolsch. Cheers.

12 oz bottle was poured into a nonic glass.

Appearance: A one finger head was poured that reduced to a thin layer. It is a golden straw yellow with great clarity and vision of bubbles coming up through the glass.

Smell: Toasted and sweet pilsner malts with some grassy Noble hops in the rear. Pretty straight forward and traditional aroma.

Taste: Very traditional Kolsch with the typical pilsner malt flavor and Noble hops. Some chewy notes and bitterness in there too.

Overall: I'd revisit this one again.

I remember a few years ago when the owner and friends were at the Taste of Marlboro pouring beer, and I really enjoyed almost everything, true to the style, well executed, great beers. But it took forever to actually get off the ground and make a brewery, even after kickstarter failed unfortunately. Now I finally get to try them officially. 5/11/15

Nose is pretty nice, like a pilsner almost, toasted grains, raw bread dough, some cereal notes, straw and more straw, a nice juicy malt with a soft layered almost complexity, almost lager like but not really, maybe a very faint hint of grassy hop but hard to tell, as well as the mild lemony tartness later (after I found in on the flavor).

Taste brings light toasted grains again, cereal malts but light, a little raw bread dough again, not yeasty though, with a little straw and cracker notes. Then hops kick in, nice bitterness with mild grassy hop profile, and a touch of a lemony like citrus note on the back end. Finish is dry with a nice grassy hop bitterness, more raw bread dough and cereal lingering, nice clean and crisp.

Mouth is med to lighter bod, soft with a mild layering complexity, and tons of carbonation, perhaps the only downfall of the beer is the overwhelming distracting carbonation.

Overall not bad, great malt profile, nice mild bitter grassy hop finish, with the carbonation didn't distract from the beer so much, and I do like the lemony tart note on the back end which reminds me a bit of a gose but not sure how well it fits in the kolsch. However, if you told me that this was lagered I'd believe you.

Rasenmäher Kölsch from Down the Road Beer Co.
Beer rating: 86 out of 100 with 37 ratings