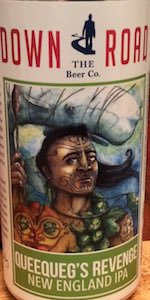 Poured from can into nonic glass.

Pours a great hazy, orange amber color with a fluffy cream head that lingers way beyond most heads.

Immediately get tropical and citrus on the nose. Sweet fruits and I'm the very back some yeast and malt.

Sipping follows the nose very much. Tropical notes, citrus, orange peels, grapefruit, mango, a slight hint of guava, and a tiny but of malts in there. Balances well.

Fair amount of carbonation is present with a medium body. Little bit of film left after sipping but not unbearable.

Overall a good NE style IPA. Well balanced flavors and does not disappoint. Would keep drinking if it is available.

I want to believe the 4pk I bought was past its prime and not stored cold. I got it off the shelf and not out of the cooler so i was skeptical right from the beginning. that being said, it was a very good beer. worthy of the BA rating it has received. The hops character is all over the charts. Not as "Juicy" as I would expect from a NEIPA but then again I think it was stored improperly. I want to try a fresh cold can of this and re-rate it.

Sparkling bubbly gold with a slight cloudiness and a foamy white head. A substantial haze increases after pouring the second half of the can.

Smell is dank with pine, onion, bread, rug and orange.

Taste is tangy onion, pine, grapefruit, lemon, catty rug, and orange with accents of apple cider vinegar, papaya and mango. It seems to be hitting almost every style of IPA imaginable in flavor.

Body is medium to full, with a fluffy feel and semi-dry to dry finish.

Overall a waste of my taste buds, nothing at all like a NEIPA barely even a regular ipa

Lightly fruity but with excellent balance. The swallow draws the first notable hop. This creates a very nice balance. The body leans thin and the effervescence is modestly elevated. The aftertaste is straight up bitter. Overall, this brew is easy to drink.

So, this is DtR's entry into the "New England hazy/juicy IPA" category that's gaining a lot of traction recently. I am a fan of these, but a lot of them feel pretty same-y and picking apart differences between beers in the style gets a bit laborious after a while, I must admit. Well, here comes Down the Road to change things up a bit. It's kind of weird that these guys even approached the NEIPA sub-style since they've mostly been sticking to more traditional styles of ale, but I'm okay with this switch-up. This beer's claim-to-fame is that it utilizes New Zealand hops instead of the typical American hops that are usually utilized. The hops utilized include Pacifica, Motueka and Green Bullet. I'm down with this idea!

Pours a slightly-lighter-than-expected pallid yellow color with a two-finger head if poured moderately-hard. Sinks to one finger after a while, with moderate lace appearing as the foam clears. Pretty much completely opaque, as the sub-style dictates. Not superbly impressed with the pour here, but it's different than the usual golden-yellow and they nailed the turbid haze, so I'll give it a solid grade overall.

Nose is really unique, honestly. Instead of a punch in the face consisting of intense tropical and citrusy hops, I'm detecting a far more interesting hit of lime, cereal grains, orange peel, some floral and spice elements and even a little bit of peppermint as well. There are some sub-surface aspects of tropical and juicy fruits, but it feels as though they sit behind the Motueka hops, which are superbly key lime-forward.

Flavor follows the nose a bit with a chewy complexion on the tongue. The initial flavor is smooth pale malt and oats before moving into a mid-palate redolent of orange, grapefruit, papaya, lime and pineapple, finishing with a slight bitterness and mild tannic, herbal and floral elements. Really unique stuff here. It might need to be dialed in just a little bit to bring out the complex subtleties of the aroma hops, but I love where they're going with this one. New Zealand hops are a very interesting match for a style that usually pushes much less subtle flavors. I'm going to have to track the progress of this one closely. It's an underdog, for sure!

Queequeg's Revenge from Down the Road Beer Co.
Beer rating: 87 out of 100 with 30 ratings