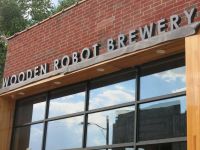 Hazy IPA on draft, younger crowd, food available from the conjoined Gastropub in the rear.

Great place for a beer and a bite at least

Rated by CMGNC from North Carolina

Rated by BullCitySpartan from North Carolina

4.43/5  rDev +2.8%
vibe: 4.5 | quality: 4.5 | service: 4.5 | selection: 4.25
I visited Wooden Robot at mid-afternoon on a Saturday. The brickwork exterior and the pseudo-industrial lettering above the entrance are echoed inside, which is brickwork with sparse use of heavy wood. Suspended ventilation ductwork and exposed beams and girders provide the semi-industrial feel often found in craft brewery taprooms; the fact that all of this superstructure is neatly painted black keeps the look tight and clean (which is not always the case). Tables are numerous and match the aesthetics of the rest of the taproom, being thick, glossy wood mounted on minimalist black metal hardware. Barstools and chairs are also a match, being of similar minimalist design and black metal construction. The overall result feels clean, uncluttered and stylish while retaining the semi-industrial ambience. There was plenty of seating inside, and plenty more outside, some accessed through a roll-up door that added to the atmosphere.

The taproom was mostly full when we arrived. The crowd was largely youngish craft beer aficionados- twenties to thirties- with some older patrons and some larger multi-generational groups that were obviously families out for the Easter weekend. The vibe was energetic and upbeat, but not raucous. The flow of customers was good while we were there, but the place never got over-full or backed up, and while the noise level was enthusiastic, all of the open doors and brickwork muted it nicely.
There are sixteen taps, eleven of which (I believe) were in service while I was there. About half of the offerings were IPAs/IIPAs, the rest were an eclectic selection ranging from Blonde Ale to Farmhouse Ale to Foreign Export Stout. Flights were available: five generous pours in nice miniature stemmed glassware, served in a unique "lazy Susan"-style holder. Regular pours were consistently provided in proper glassware, and could be had in multiple sizes for each beer, which I always think is a nice touch.

A likewise eclectic selection of upscale food was provided by Cre8 Gastropub, ranging from small plate and a few entrees to tacos, wings and a sizable Charcuterie board of local cheeses and meats. Food was easily ordered from a foodtender at a station near the entrance, and was delivered to the table. Judging by the crowd, Cre8's work was both popular and tasty; I can personally vouch for the quality and flavor of the wings, which were served intact, unlike your average wing-house wing.

The five beers that I tried- Over the Clouds (IIPA), What He's Having (IPA), So Extra (Foreign Export Stout), What I'm Having (Session IPA), and Generously Hopped v11 (IPA)- ranged from great to amazing; I would rank them in the order listed, with Over the Clouds being amazing. Having had various iterations of What He's Having and a few of their other beers on tap at Hey!Beer in Wilmington, I had high expectations walking in the door, and Wooden Robot definitely delivered.

Service was quick, pleasant, courteous and enthusiastic. Beer-to-go is available in growlers, crowlers and cans.

Reviewed by titojackson2000 from Alabama

5/5  rDev +16%
vibe: 5 | quality: 5 | service: 5 | selection: 5
Wooden Robot Brewery is just a few minutes from Downtown Charlotte, NC. It features a fairly spacious bar/dining area, as well as, an outdoor patio. The atmosphere is an urban hip style. The interior features exposed brick walls, plumbing, and ventilation system. The bar itself is on the small side and gets fairly crowded. However there are about 10 hightop tables, couch area, and several wall seat sections. The food and selection is above average here, but commensurate with similar locations. This is currently a dog friendly establishment with water dishes available for your canine companion. The crowd ranges, but is mainly 20s and 30s. Overall this is a well above average establishment that should be visited when near Charlotte.
Jul 14, 2017
Rated: 4.73 by SebastianMandeville from New Jersey

Reviewed by Pourharddrinkslow from South Carolina

4.2/5  rDev -2.6%
vibe: 4.5 | quality: 4 | service: 4.5 | selection: 4
Fun place in a new brick building. The beers were all good, but because I was there the week before their 1 year anniversary, the selection was small (they were putting on rare stuff that weekend). The service was fast and friendly, I will definitely be back. Nice IPA's and saisons.
Jul 06, 2016
Rated: 4.03 by qcghost from North Carolina

Reviewed by justinbarber522 from Colorado

3.96/5  rDev -8.1%
vibe: 4 | quality: 4.5 | service: 3.75 | selection: 3.5
The IPAs didn't have too much of a bitter kick, which was good for me. Favorite overall was the Overacheiver Pale Ale. Very smooth Pale with just the right amount of bitterness. The only other ones I tried were the What He's Having IPA, which was great, and the Not Sure Amber which wasn't too malty but still very good. Good solid brews overall!
Jun 09, 2016

Reviewed by scottdills from North Carolina