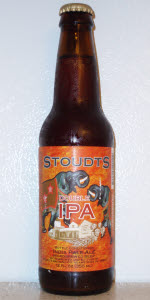 Rated by Bluerabbitbell from Pennsylvania

Reviewed by JJKBeerLvr from Pennsylvania

Appearance: Deep gold body with thick light-tan head. Beer is a bit cloudy. Head is very thick, and leaves a lot of lacing on the glass.

Taste: There is a noticeable hops flavor, as expected from an American IPA. There is good bite from the hops along with other flavors like citrus, but the hops bitterness is not overpowering. This is not as bitter as some other American IPAs, and there is a little sweetness. The aftertaste provides a variety of flavors over time. Not overly bitter or hoppy, and has a nice balance.

This is a smooth strong-bodied beer, that is easy to drink. It is a good IPA, and is very well balanced. The aftertaste is really enjoyable. I would definitely drink this again.

Reviewed by HeadyTopperLover from Pennsylvania

Smell is apricot, mellon, caramel, biscuit, and a little grapefruit.

Taste apricot, bubblegum, biscuit, caramel, and a little more grapefruit in the finish.

Mouthfeel is pretty big for the style, nice amount of life, not really dry, and besides the rather odd pairings of flavors, pretty approachable for its size.

Overall this is a very unique DIPA, kind of leaves you confused, but really pretty interestingly tasty.

3.94/5  rDev -0.3%
look: 4 | smell: 3.75 | taste: 4 | feel: 4 | overall: 4
I had this on draught in a pub. It was served in a pint glass. It pours a hazy copper color with a thin, khaki-colored head and lacing. For an IPA, the smell is surprisingly malty and there is a distinct aroma of ripe fruit. The taste was totally unexpected: it's quite sweet with ripe strawberry and a lot of caramel up front and a slight bitter hoppy taste at the finish. It is also surprisingly malty. It's a medium-bodied ale, lightly carbonated, and the 9.43% ABV is noticeable but not overwhelming. Overall, this is, to me, a unique Double IPA, the sweet fruit and malt being prevalent. I really enjoyed it. I would like to try this one in a bottle and at a warmer temperature.
May 21, 2016
Rated: 3.9 by Chinaskifan1 from Pennsylvania

Reviewed by reverendsteveii from Pennsylvania

Color - Dirty blonde tending to copper, cloudy and opaque like a Hefe, but darker in color. A middle ground between a hefe weizen and an IPA.

Head - White with a touch of coloration from the beer, airy, recedes after about a minute, but leaves eavy lacing

Mouthfeel - Heavy and thick, but just hoppy and strong enough to not leave the mouth feeling 'coated' as with barleywines and other strong beers. Middling-light carbonation, a bit creamy.

Impression: The first sip is half vodka half corn syrup, with a touch of caramel. The second sip is a little less surprising in its boldness, and you begin to notice the hops in the finish. On the third sip, the hops become more pronounced (perhaps the sweetness taste buds on your tongue have taken a well-deserved break) and you begin to realize there's some complexity here, but the hops also come quite close to being chemical in their bitterness. The caramel gives way to coffee and chocolate, which compliment the bitter finish brilliantly. This one's a grower, and I didn't care for it at first. The depth, however, is surprising.

This beer is an example of a genre I don't normally care for, but has a uniqueness that makes it stand out compared to other beers in this style. 85%, an excellent proof of the fact that high gravity doesn't mean a simplistic malt nightmare,

Big malt experience. Too much alcohol. Fuck this. All caramel and alcohol burn, maybe some toffee. Disappointing, son. A little flat too.

Reviewed by BrokenEdge from Pennsylvania

3.96/5  rDev +0.3%
look: 4.25 | smell: 3.75 | taste: 4 | feel: 4 | overall: 4
Had it on tap at the brewery. Looks a bright orange color with a frothy white head, leaves tons of lacing. Smell has a lot of alcohol initially, also with some citrus, caramel, and bread scents. Taste has bold citrus and pine hop flavor with a strong malt background; not too bitter, but noticeably sweet and rich. Between the bold hop aroma and flavor, and the overall richness of this beer, it's definitely not sessionable. Feel is sticky, medium, and leaves a lingering hoppy aftertaste. Very boozy, but it works with all the other flavors and I didn't mind the faint alcohol burn.
Mar 04, 2016
Rated: 3.74 by jmg480 from Pennsylvania

This beer pours amber in color with burnt orange highlights. It haze a slight haze. It is topped with three inches of beige head that sticks around awhile leaving some pretty decent head.

I immediately get some rubbing alcohol. I don't get much in the way of hop aroma. I do get some toasted malt.

The taste starts out just like the smell with a strong alcohol presence. I do taste some hops in the way of some pine with plenty of caramel malt in there as well.

I am not much of a fan. The rubbing alcohol aspect is not my favorite. I guess it's over 9% so there's that.

Reviewed by PJKSR02 from Connecticut

Reviewed by StonewallSipper from Pennsylvania

Reviewed by DavidS333 from Virginia

5/5  rDev +26.6%
look: 5 | smell: 5 | taste: 5 | feel: 5 | overall: 5
Stoudt's Imperial IPA is a rich tasting American Double/Imperial that is satisfying and tasty. The froth for this beer/ale is minimal. The body of the beer is of a medium nature, on a scale of thin/medium/thick. Its color is sort of like a somewhat bright but translucent and not transparent amber. The smell is of a sort of bready-hoppy combination and is suggestive of the great taste of this beer.

While some American Double/Imperial brews may seem like a drink, others may seem like a meal. This beer has the meal quality to it, and the sort of satisfying and tasty element of this brew is really unique and tasty. The beer's hoppy taste has a sort of ribbon of sweet pseudo-breadiness woven into it that sort of sparkles within and beneath the hoppy taste, sort of allowing one to not get too bogged down in the hoppy taste its self. For, while one has on the one hand the sort of traditional American Double/Imperial taste to this beer, it is nicely spruced up with a sort of sparkle of bready more wheat-beer taste that altogether makes for a very rich combination of hops bitterness and bready sparkle.

The aftertaste of this beer is also satisfying. The hoppy bitterness doesn't linger too long with this beer. Though there is the nice hoppy bitter aftertaste, it doesn't really overpower the more medium bodied elements of the taste, and instead fuses with it to make an altogether very drinkable and satisfying beer. The aftertaste is also perhaps unique in that it fuses the spicy bitterness of hops with the lighter tastes present in the beer, hence perhaps making for a beer that is very satisfying even in the aftertaste's linger.

Altogether, this is a very tasty and satisfying beer.

Rated by Cafu912 from Ohio

Reviewed by mobius71 from Pennsylvania

4.75/5  rDev +20.3%
look: 4.75 | smell: 4.75 | taste: 4.75 | feel: 4.75 | overall: 4.75
L: A white 3” pillowy persistent foam collar sits atop a brilliant gold column laying a strip of lace on the glass to mark each drink. S: Fruit and grass aromas rise from the glass with traces of citrus and biscuit. T: Big malt backbone with some caramel notes supports layers of flavor beginning with a herbal bitterness, a layer of fruit and citrus, a more assertive pithy citrus bitter, followed by a blast of alcohol. There is more bitterness in the foam than in the body which changes the flavor profile through the course of the drink as the foam slowly collapsed into the body. F: Medium body and carbonation. O: The brewer balances bit malt, alcohol and hop flavors and bitterness to produce a beet that is scary easy to drink
Aug 11, 2015
Rated: 3.27 by hoppyhoppy from Pennsylvania

S: the only way I can describe it is over ripe strawberries;

T: follows the nose; a little harsh from mid-palate through the finish; mildly bitter at the end, but the bitterness build after the swallow;

O: a little too sweet for my taste and the strawberry character was a little odd for the style;