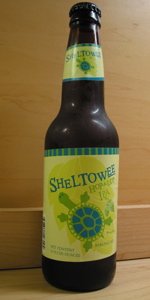 From the bottle: "Brewed and bottled for Liquor Barn by BBC Beer Co. Louisville, KY".

I had not even fully Pop!ped the cap when I began to experience the foaming described by tone77. Fortunately, I always have an awaiting glass at the ready, so I placed the bottle in the glass while I prised the cap off completely. There was still some foam pushing up in the neck, so I conducted a very gentle pour which still produced three-plus fingers of dense, rocky, tawny head with decent retention. Color was a solid Amber (SRM = > 7, < 9) with NE-quality clarity. Nose was pungent with dank, resinous hops! It was kind of unexpected, but once I got over my initial shock, my mouth began to water in anticipation. Mouthfeel was medium and for all of that foaming, the carbonation seemed pretty light. The taste was sharp, very hoppy, but at or beyond the point of saturation. The hops had a grassy, minty taste, not unlike the BBC APA, but sharper, without much of a malt presence at all. This was an example of the type of imbalance that I am not big on. Finish was dry and slightly astringent, not unpleasant, but not the sort of thing that I enjoy, either.

Reviewed by Grindelvasdrum from Kentucky

Reviewed by Retroman40 from Florida

3.75/5  rDev +0.3%
This is a decent enough IPA - It apparently is only available at Liquor Barn stores and made by local brewer BBC. Pours out a orange amber with good head retention. The smell is fruity hops and the flavor is dominated by these hops. I found it a tad on the sweet side but nothing that detracted from the beer. If you happen to be in a Liquor Barn give this a try as it is between a buck and buck and a half less than many other similar beers.
Dec 04, 2014
Rated: 3.25 by khargro2 from Tennessee

Reviewed by Cory_Brown from Kentucky

2.43/5  rDev -35%
look: 3.5 | smell: 3 | taste: 2 | feel: 3 | overall: 2
Went to liquor barn looking for a stout and or IPA. Couldn't pass up a 6er of a double IPA for 7.49.. (So glad I got a 4 pack of storm king) Honestly, the only reason this beer intrigued me was because it didn't say BBC on it. I haven't liked anything I've tried from them but may try a couple more just because they're local..
Anyway, the only thing I liked about this is the creamy head and lacing that persists throughout. It's just too much. Way too one dimensional. It's a hop bomb and the bitterness is just too much for my taste.
The only reason I'm not scoring this even lower is because of the price.

3.67/5  rDev -1.9%
look: 4.25 | smell: 4 | taste: 3.5 | feel: 3 | overall: 3.75
Contract brewed for Liquor Barn - not likely to be even average you might think. But wait, this IPA looks and smells great, tastes pretty good and is above average overall. The beer is a deep orange-amber with a well-proportioned and very durable off-white head. The aroma is another strong point, with citrus and tropical fruits, including pineapple and tangerine rind, mixed with a faint breadiness. Quite a bit more pine comes forward in tasting, with a moderate grapefruit rind aftertaste. Of course, some hop heads will like these qualitites, but I wish it tasted more like it smells. Still, worth trying, especially at this price point.
Aug 16, 2013
Rated: 3.75 by crbnfbr from Kentucky

Reviewed by inlimbo77 from Delaware

T: Some bitterness on the tip if the tongue. Not overpowering. Again the muted fruity hops. Definitely orange and some light citrus. At the back of the palate you get a good amount of bitterness. Sticks around a while. Bitter dry finish.

M: Lighter side of medium.

Reviewed by SerialHiker from Illinois

Smell: Woodsy, dank hops right off the bat, I could smell the dank bitterness as soon as the cap came off the bottle…it’s very musky, which I’ve been seeing more of lately in the IPA’s I’ve been trying…I also get some sweet, toasted, bisciuty, caramel malt action that has a spiciness to it that’s a mix of rye and black pepper… not an “American” style IPA, very little citrus or zestiness of any kind…(3.5/5)

Taste: Earthy, mildly dank hops up front…malts are toasted and biscuity, adding to the overall earthiness of the flavor… spicy, herbal, piney hops are noticeable after my palate gets over the initial earthy overthrow (and the beer warms)…there is a light citrus freshness that does hit the outside of my tongue after every swallow…the flavor I have to say, gets better as it warms in my glass…very much a traditional style IPA, nothing overly citrus about this…(3.65/5)

Overall: This is a good brew…it’s definitely more of a traditional style IPA, very earthy and biscuity…as it warms, it becomes more complex, bringing some noticeable spiciness…while this isn’t my favorite style of IPA, this one isn’t that bad and is something I would actually drink again…9.0% ABV is high and not too apparent in the overall flavor, but I’m sure after a couple of these I’d be feelin’ good…if you see it on a mix-a-six rack, it’s worth picking one up, but don’t expect too much…for me, one is all my palate can handle…(3.5/5)

Body is moderate, with carbonation a tad light, and substantial alcohol warmth. Astringency is irritating.

Good bang for the buck. A lot more malt than I recalled, but I drank it just short of rom temp.

Reviewed by Veristic from Tennessee

S- Some Citrus hops right off the bat. Then a fair amount of malt, some sweetness. Maybe even some English and/or noble hops in there. As it warms it gets even more maltier and "non-American".

T- Moderate-high bitterness supported by a bold malt character. I swear I think they may have used some English malt in this as well. Citrusy, resiny and slightly piney hops. I'm also getting what seems to be some notes of spicy/herbal/floral UK hops. Malt and bitterness linger in the aftertaste. Overall, the taste is good but not great and not what I look for in an Imperial or American IPA. As it warms the flavor goes through the same transformation the smell does, maltier and less American character.

O- I really think this bottle is a little past it's prime but it was the only Hop-a-Lot I could find after going to 3 different Liquor Barns. There are many other Imperial IPAs I'd rather drink but for the price this can not be beat. I've let this variable weigh into the overall impression rating. Come on, where else you gonna find a $1 Imperial IPA!?!? This is American macro pricing!

Reviewed by OneDropSoup from Pennsylvania

Piney orange marmalade in the smell, with a cakey, "browned edges" kind of sweetnes, like an orange cake with a zesty hop brightness. Good stuff.

Bitterness hits immediately in the flavor, with zest & pine, then lets in a bit of orange & caramel sugar, then a mild lemon tea-like dryness in the finish. Nice bracing bitterness in the finish, too, rounding off like an orange muffin.

Smell: Malt forward, with caramel tones, but there is ceratainly some pith and pine in the aromatics, as well

Taste: Very well-balanced, at the outset, with the caramel, citrus and spruce flavors coalescing; by mid-palate, there is a unique fruity character that becomes more pronounced, after the swallow, and is reminiscent of Juicy Fruit gum; the finish has plenty of hop oil bitterness though there is also quite a bit of sweetness on the tip of the tongue

Overall: This is a pretty decent DIPA that has some unique characteristics; not in the top echelon but worth seeking out

Thanks, Cresant, for the opportunity