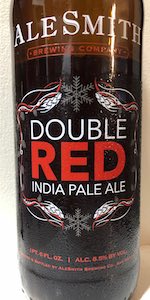 Previously known as winter YuleSmith, this warming, hoppy ale used to be available exclusively during the holiday season. But the popularity of this red-hued India Pale Ale grew to the point where sharing a limited run of beer with our fans seemed insufficient. our answer was to convert this crimson IPA into a seasonal offering to be enjoyed from fall through the winter months. Caramel malt sweetness combines with citrusy highlights to bring forth a dry, highly drinkable beer that's simultaneously hearty and thirst-quenching. the holidays are too brief to contain this much flavor.

November 14th, 2015 - Alesmith's superb dedication to quality appears here in the Double Red IPA, but first I have to take off its disguise. You see, the smell is indistinguishable from Stone's signature bouquet, with maybe a touch more cinnamon and a slight rustic winter touch, but otherwise the hops used here are a keen imitation of another San Diego brewing titan. The flavor is more distinguished and unique, with that rich malt bill that red ales put off, but a little lighter than Stone on the hop profile. The spice from the aroma is added nicely on top of the malt body, lifting the caramel notes. Only the slightest level of alcohol is detectable - interesting, given the "Double" nature of the IPA - and it has a long aftertaste, leaving more spice as it goes.

Not too shabby at all - maybe a little too old and the malt dominated? I enjoyed it quite a bit but then again, maybe was a little disappointed since I expected great things from AleSmith. Pours a honeyed amber-dark golden color with lots of fluffy white head and some spotty lingering lacing. Smells great, lots of tropical citrus fruit zest hops - grapefruit, lemon, orange, mango, pineapple - along with some weaker floral hops, malt and vanilla. Taste follows the nose. Good, crisp, mild, smooth mouthfeel and great carbonation. The balance was just a little off though, a little too much malt presence and not enough hoppy bitterness to balance it.

This is the picture of what I think about when I think of a red IPA/DIPA: dark copper color, a little hop haze, a big ol’ sudsy tan head, loads of fruity hops and caramalt on the nose, hop-forward on the taste, caramalt into a full, slightly dry finish.

This is really well done by AleSmith, IMHO.

The perfect beer to me. Absolutely nothing I'd change about it. With my wife being pregnant or having very young children over the last 3 to 4 years it's been (what feels like) a very long time since I've had this beer. Rich amber colorand a healthy white head. On the palette there's a lot of carbonation tingle while your nose is filled with biscuit toastiness. The hops are huge and piney. Every part of my taste and smell senses is completely filled. This thoroughly checks absolutely every box for me, is seriously my favorite and is every bit as perfect as i remember it being

This double ipa does the job quite well. It shows a big toffee presence, nice hoppy notes. It's grapefruit and pine forward. It's not complex but it goes straight to the point. A classy west coast dipa

Taste: Similar to the aroma with sweet caramel malts, grapefruit flesh, zest and rind, grass and pine. Finish was nice with moderate bitterness.

S: A balanced aroma, some piney hops with a good amount of caramel malts.

T: A lot of caramel malt, overshadows the pine hop presence quite a bit, less like an IPA and more like a hoppy Amber, a touch of roasty character is a nice touch.

Poured from a 12 oz bottle into a pint glass

T/F: Followed the nose. Rich malt backbone with caramel and sweetness. Fruitier hops tgan expected. Some tropical notes with citrus and pine. Reasonable bitterness but well balanced by the malts. Finish is citrus and grains.

O: A big malt forward DIPA. Flavorful and rich. Easy drinking and one I'd have again.

Pours a dark ruby-amber with a medium sized head and a ton of carbonation. Smell is roasty-caramel, grapefruity hops.

Poured from a brown 12 oz. bottle. Has a dark amber color with a 1/2 inch head. Smell is of caramel malts, some pine. Taste is piney hops up front, caramel malts at the finish, smooth and tasty. Feels medium/full bodied in the mouth and overall is a quality beer worth trying.

A: slight haze; amber colored with orange highlights at the edges; 1 finger light brown head that receded to a splotchy cap; nice lacing;

S: intense pine with caramel in the background;

T: more pine than caramel to the middle, then more caramel with a dose of herbal character there as well through the finish; mild to moderate bitterness at the end;

This is a 22oz bottle of the classic "YuleSmith" label which I've cellared for several years. Why? No good reason -- it probably shouldn't be aged. Pours deep red amber in color with hints of ruby red grapefruit and orange. Moderate chestnut head. Aroma is hoppy and spicy, with a warm, clove-like note on the center of the palate. The beer is heavy, but incredibly mellow. What could have been a chalky, malty mess with too much hops for a red ale, is actually really nice, with a pleasant citrus zest and clove spice that carries over the tongue just long enough, and then finishes remarkably clean.

A fresh 2016 edition (now called Double Red IPA) pours with the same body but forms significantly taller, foamy head. As you'd expect, the aroma is way better, too. Opening this beer is like walking into a cedar evergreen forest. The beer is hoppier in the mouth, too, with both bitterness and astringency. If the aged brew was an Imperial Red Ale, this beer can be called a true double IPA. Is it possible the mouthfeel is better on this one? The cellared beer was creamy, and so is this one, but with this flavor profile I'm deeply impressed with the feel on the tongue and roof of the mouth. Drinkability suffers a bit in the fresh version, but the more aromatic nose more than makes up for it.

Hazy red appearance with 2 finger slowly falling tan head. Decent lacing on glass. Hop aroma has faded after such a long time in the bottle but still picking up a pleasant if nondescript hop aroma and some alcohol in the nose. Taste is caramel sweetness, grapefruit, pine, bubble gum, slightly astringent boozy finish with a firm bitterness to counteract the sweetness. Very well balanced. Mouthfeel is just about right for the style, thick but not too thick. This beer is a very enjoyable and tasty beer even after several months in the bottle. The flavor profile of this beer really opens up as it warms to 45-50 degrees. My first Alesmith product since they started distributing to MN but it won't be my last.

This one hit all the right notes for me. poured into a snifter, it's a beautiful clear dark ruby with a generous fluffy tan head that has good retention and leaves some very nice lacing. A nice aroma of citrus and grassy hops and caramel. The taste is a pleasant balance of malty caramel sweetness and earthy hop bitterness.

This is one of my all-time favorites and came very close to being my first 5.00 rating.

Poured from tap into a snifter. Deep red mahogany color with a great head and lacing. Beautiful beer! Caramel smell. Taste is pleasantly malty with cinnamon, raisin and prune. Had it over Thanksgiving weekend, writing from notes.

L - Deep amber/ mahogany, 1 full finger of head, and tons of sticky lace left all over the glass and top of the brew

F - Medium body, well carbonated, with a sizzle down your throat as you swallow

This beer is superb. Slightly hazy. Deep red color with a creamy, tan head. Sheet lacing. The aroma is bright citrus bursts right off the bat. Sweet and malty. The flavor follows suit with grapefruit, tangerine, & pine. Well balanced with some caramel malt. Solid. I'd recommend picking up one of these.

Look: It pours dark amber with reddish hules. It has a tannish head tinged with red.

Smell: The head retention is good. It has a deep malt aroma with caramel, grass, floral, grapefruit hints.

Taste: It has flavors of deep caramel, grass, floral, and some grapefruit.

Overall, this is a well balanced ale with plenty of flavor and complexity.

Nice dark amber color and light head on this well acclaimed ale. Smell is a deep, malty pale grain, just as the name suggests. However, the taste and feel are what puts this beer over the edge. Stellar beer, taste taking the Red IPA style to a consistently rewarding level I had not previously experienced. The 8.5% is perfectly built into this ale, making it my favorite of the style. These California Red IPAs are the best. Cheers!!!

Poured a copper body with two finger head and lace ring down the glass. Caramel and toffee malts hit me in the aroma along with hints of booze, dark fruits and a nuttiness that is surprising. Medium body, a tad bready, balance is kept between oily, piney hops with caramel, toffee malts and touches of figs and something like hazelnut. A well-balanced and nuanced beer that is a dangerous sipper as it's easy to drink and hides ABV well.