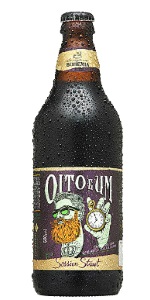 3.39/5  rDev -3.1%
look: 3.5 | smell: 3.75 | taste: 3.25 | feel: 3.25 | overall: 3.25
Very dark brown color with thin head with medium retention.
Nice aroma, as promised with clear notes of Belgian chocolate, orange peel and mint. Hints of hay and coffee. Laughing out loud; just now I understood its name (Eight and one), it is quite similar to the UK brand After Eight mints.
Flavor with notes of homemade coffee, mint, nuts, just the bitterness from the orange peel, mild cocoa and herbal hops. Dry, bitter and roasty aftertaste.
Light to watery body with good carbonation.
They had a great idea that started quite well in the nose, but it had a bad execution producing average results after all. I believe if the body was enhanced, it could also better show the same After Eight nuances in its flavor, with more cocoa rather watery coffee.
Just by smelling this beer I associate it with After Eight and understood the reason for its name. The explanation in the labor did not make much sense at first. Enhance this brew and it will be a fun and interesting beer.