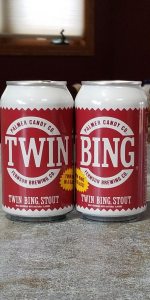 The Palmer Candy Company's flagship candy bar, the Twin Bing, features a soft cherry nougat covered in a milk chocolate coating with rolled nuts folded into it. It's a delectable treat and one worth seeking out.

Fernson got the green light from Palmer to make a beer version of the Twin Bing. Naturally, us midwestern beer drinkers were all excited. (I was a little apprehensive admittedly). It's not every day that the legendary Palmer Candy Company allows a brewer to stamp its legendary official logo on their can.

Special thanks to Kae for this can.

Pours a rust color from the can and forms a ruddy brown body with a large amount of transparency. Not a great start. Head starts at 2 fingers, recedes to a creamy ring. My first thought is, "this does not look like a stout" - this should be oil black.

Aroma is decidedly metallic with some elements of cocoa powder and faint sweet and sour raspberries. Not much else here.

IMO, the flavor resembles nothing of a Twin Bing. If I were to drink this on its own without foreknowledge of what it was supposed to be, I would say it tasted like a brown porter with lots of fruity yeast flavors. Light notes of cocoa powder. More fruity yeast. It does not taste like it should - not like a Twin Bing, and not like a stout.

Overall, a big failure. Mixed reviews on the street about this one. I was afraid of this since our local brewers are still having trouble producing quality beers. Come on, guys. It's just a shame the Twin Bing name had to go down with the ship on this one.