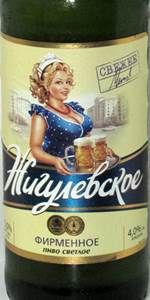 My version of this beer is in a 1 pint green bottle with a 4.5% abv listed. $3.99 single
at Beer on Tapz in Germantown. Clean and crisp in appearance but kind of an evil lining to the graininess in the nose.

A little more balance than I anticipated, this is a solid version of this ubiquitous European style. Nice with spicy food or a football match on tv, but not an unmissable bear.

Notes via stream of consciousness: The graphics on the label that I have match that of the one pictured on BA but the alcohol content is 4.5% instead of 4. The straw gold body offers fingerprints-through-the-glass clarity beneath a finger-width of standard white foam. The head retention is limited and it's already dropped to just a standard collar but there is some thin lacing left behind. The aroma is mild but offers some lightly sweetish adjunct-laden malt with a hint of yeasty fruitiness and a smear of grassy hops. On to the flavor... well it doesn't get any better. What I've laid out for the aroma is basically repeated. There's definite adjunct in use, and no real hop flavor, but the fermentation has been fairly well done (I think... there is a touch of spiciness to it that I'm not sure is really coming from hops) and there are no off-flavors. The fruitiness is stronger than the aroma would suggest, and I'm finding apple, berries, and a bit of white grape which would be quite nice in an ale but isn't so welcome in a lager. Still, it's not bad. A limited bitterness runs through it and there's a little bit of residual adjunct-malt sweetness to it but it fades quickly leaving that little bit of spiciness to linger for a moment. In the mouth it's medium bodied and crisp. As far as pale Euro lagers go this pretty much fits right in with the brunt of them - average in quality and basic.
Review #6,863

Poured from the bottle into a Libbey style pilsner glass. Uh oh the green bottle roulette, will there be the skunk monster?

Aroma detection is luckily avoiding the skunk monster. The brew gives more towards a light Vienna it seems with hints of sweet caramel like malt but with a lighter touch. Not much of a hop presence, but then again wasn’t expecting one. There is something a bit odd coming off this, not bad necessarily but sort of fusel but not terribly. Fairly clean smelling but not totally for a lager.

Palate seems to manage some luck. Light bodied but with some sticky malt touches on first sip. Not too wet and fairly solid mouthfeel for a 4.5 abv. Mid palate hits with a light caramel, but also there's a bit of steely like hop presence. The aftertaste is very much all over and contains the bulk of the flavors which is a bit chaotic. Steel and bitter hop presence, sweet faint banana tones mixed with caramel, lots of carbon dioxide finishing, and some very prickly gaseous heat.

This is an interesting mass market "Euro" lager, while a passable and not really good beer let a lone great, it is far better than some of the mass market offerings I've had from other producers. It does seem to be all over the place though.

I was in Brooklyn's Brighton Beach last Thursday. I really dig that area due to its eastern European vibe. I have self-taught myself to read Cyrillic & my tastes are quite European so the shopkeepers are often shocked when I inquire about Kvass & okroshka (a cold soup of greens & other veggies with chopped hard boiled eggs). Hee hee. I also managed to find some new CANs of beer for today,

A 0.9L CAN! Immense, with a Crack! that was louder than any in recent memory. I had pulled out one of my largest glass steins in preparation for the Glug. It was actually a bit of a task to keep this from making a monumental mess as I tried to CANduct a slow, gentle, C-Line Glug. It returned the favor by forming a massive amount, nearly three fingers' worth, of dense, foamy, rocky, bone-white head with decent retention on this hot, humid Summer Sunday afternoon. Color was a pretty Yellow-Gold (SRM = 4 - 5) with NE-quality clarity, enticing The Gelt Gang of Midas, Mammon & Croesus to come into the kitchen for a taste. Nose had a slight metallic tang/twang, but it also smelled of sweet honey, very much of a Lager. Perhaps not a really well-made one, but at least it did not include corn. Mouthfeel was thin-to-medium, not watery, but not far beyond it, either. The taste was actually not bad since the metallic nose did not translate to its taste. Instead, the honey maltiness really carried it, but without imparting a cloying sweetness. It was sweet, quite evocative of clover honey, but not so sweet as to be off-putting for me. I CAN tell you, I really got to spend some time with it, given the sheer volume of the CAN! I kept thinking of how easy it would be to roll into Exquisite Foodland at 409-413 Brighton Beach Ave., load up the cooler with these CANs & some ice & head three to four blocks to the beach. I would even throw in some FF&V, especially the watermelon slices in the doorway, for a snack. Mmm, watermelon-infused Lager. Mmm. Finish was semi-sweet, right around my upper limit for malty sweetness. Did I mention the price point? For the size & volume, it was a steal, well beyond a bargain! I really don't care about quality in this case. It was a rare sighting of a once-in-a-blue-moon CAN with great graphics that is going to be a great part of my buddy's CANlection. YMMV.

Looks hazy straw color with foamy white head and some lacing.Again with a lot of these Easter European beers the smell is very muted to non -existent. Taste is surprisingly fresh and lemon tart with a bit of density for a "whitbier" Still no smell WTF ?

From the bottle, it pours a golden color with a small head that quickly reduces to a thin white layer. Grainy scent in the nose. The mouth gets a light lager, just so flavor. Drinkable, better after a hot summer's day outside.

From Festival de las Naciones. In Bavaria glass. Playing Space Pilgrim Episode 3. Light, clean and fresh but plenty flat and dull, with a watery feel and just light grass and lemon notes standing out, more in nose than mouth

Darker golden amber in color. Clear in appearance. Yup! She's got her steins and her cans. It's not bad. Not great. Borderline bad, but drinkable. Think foreign miller light.