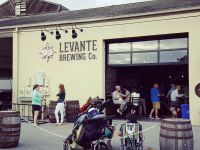 My local hometown brewery/hangout. This location (West Chester) is the brewery/taproom. Great hangout place considering it’s in a corporate park. They make it work. It’s usually busy and quite often packed. Luckily, they’ve opened a second location (Chester Springs) called the Stables. Have yet to visit it due to COVID restrictions but have heard great reviews. West Chester location has a large on tap selection and a solid carry out option, too!

Levante beers are generally outstanding. Their brew masters continually pump out new and interesting recipes. Love their stouts and ipas.

Levante Brewing is one of my new favorite places. It's a cool little brewery tasting room with a very respectable selection of up to 17 beers/ciders on tap. I've really enjoyed every single beer I've had - honestly - and there were a few that were unique, and I think, exceptional. I've only eaten from one food truck, Abuelita's, but their empanadas were quite good - better than I can make. I'd highly recommend it if you're in the area, especially if the weather is nice.

My wife and I were have been here on a few occasions and it keeps getting better with every visit. It's in a nice space in an industrial park right off of West Chester University's campus. It's definitely better in the Spring/Summer/Early Fall because they can open up the garage door and you can enjoy the weather. They don't serve food but have quality food trucks at the premise. They have games to play and music going but no TV which is nice so people can actually converse with each other. Overall a great place to hang with friends and family.

Stopped in on a rainy Thursday night. I point that out because I believe on a nice night or in summer time they open up some of the doors and let people play games outside, or at least so I've heard.
The brewery is located in the back of a corporate park off of a highway (which at that point is transitioning into a local road). The tap room was busy but not overly crowded. The room is comprised of a 12-14 seat bar, a couple of picnic/bench table, and some high tops. At the end of the room there is a food truck parked in the doorway. They have food trucks Wednesday through Sunday, rotating a different truck each night, which is the food option. During my visit Abuelitas food truck was there. There are no TVs in the taproom but there is a flat screen menu which not only shows whats on tap, but also Untapped users who are in the bar and what they are drinking (if they are checkin in).
We sat at the bar and we greeted by two very friendly bartenders. Through the evening the bartenders were readily available to discuss the what was on tap or help us decide what we were having next.
Very good selection on draft. Ten different beers, a cider and root beer on tap. The beers ranged in all different styles: Wit, Kolsch, Stout, Hefe, Marzen, and several IPA's (Session, Imperial, NE Unfiltered) just to name a few. They also fill 32 oz Crowlers and 64 oz Growlers to go.
The beers themselves were pretty good. I had the Dark Side of the Coconut Stout, Cloudy and Cumbersome NEIPA, and Summit Hop Necessity Session IPA. Cloudy and Cumbersome stood out and was really enjoyable.
Overall I was happy with my first trip to Levante and I look forward to going back. The bar had a great atmosphere in which you could enjoy a couple of beers with friends. They also have a good variety of beers to satisfy whatever you're in the mood to drink.

Conveniently located away from the general hustle of midtown West Chester, in a small industrial park, sits Levante Brewing. Nice enough place, with a small bar, and a good outside seating area. I've only sampled a couple of their brews so far, at their first bottle release, including the bottle, and thus far, I'm not impressed. But I'd still like to go back and see what else they have to offer. Nine beers and a cider on tap gives you a decent amount to choose from. Service was okay. The release was well organized, with them handling everything well. The owners seem like good friendly people. Service at the bar was somewhat lacking / disorganized. There is no kitchen but they have convenient food trucks here.

Again, I want to go back to try some more of their brews, but I didn't really get a good first impression.