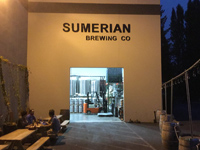 Sumerian just had their first year anniversary. We were the first ones in on an early Thursday afternoon, but I'm sure it's swamped on weekends. The server was part of the family who owns the business. She was very proud of the place and showed me the tanks in the back. Beers in the flight were all top notch, especially the Warrior Imperial Stout. They just started bottling, too. Sumerian is a fun place to visit, just down the road from Red Hook.

Sumerian is a nearly brand new brewery that just opened in April. I visited the other day on my tour of Woodinville and I was quite impressed. It's all brand spanking new with a big bar, lots of seating and a great den-like atmosphere despite its rather sterile industrial park setting.

The beer was rather impressive too, especially considering the youth of the brewery. They had 7 or so beers on tap, including a white-wine barrel aged Pilsner which was a fascinating quaff, rather like champagne. The service was very good, with two friendly, beer-loving staff behind the bar despite the light crowd. I will definitely be returning to Sumerian when I can.

Attended the grand opening and had a very nice time. Plenty of space at tables or the expansive bar. Good amount of outdoor seating as well. Servers were very attentive and friendly. Had a couple food trucks and my understanding is they will have a few rotating to be there though I don't know the days or anything.

Beers themselves, while varied nicely in styles, weren't terribly great. I did enjoy the ISA and Pilsner of the six they had available. There is some fine tuning that needs to be done to the recipes, especially the Stouts which seemed thin and the IPA seemed to lack a good malt base to build from. Hopefully these issues will be corrected in the next few months as the beers are dialed in. Overall a nice place and people that make okay beers so far. Good Luck!

Sumerian Brewing Company in Woodinville, WA
Brewery rating: 3.79 out of 5 with 159 ratings