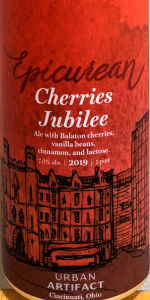 Ale with Balaton cherries, vanilla beans, cinnamon, and lactose. Poured from a can into an Urban Artifact Thoroughbred glass. The pour is quite hazy and very red in color with a thin head that has average retention for a sour. Cherries and vanilla on the nose with the unmistakable sour-apple note of a wild beer behind it. A faint hint of cinnamon as well.

Light body with a firm feel and a pleasant fruity-tart flavor that follows the nose well. Lots of cherries up front along with a faint cracker-like graininess that adds a little sweetness. Cherries persist across the palate and are met by a whiff of vanilla and a little earthy cinnamon on the finish. It's difficult to tell whether the tartness is coming from the cherries or from the beer itself. No matter. It's really good all the same.

Sigh - what can you say? My favorite brewer of sour beers doing what they do best - marrying wildly-fermented beers with gobs and gobs of fruit. The more new beers I try from UA, the more I am impressed by them.

Epicurean Series 2019 - Cherries Jubilee from Urban Artifact
Beer rating: 90 out of 100 with 12 ratings