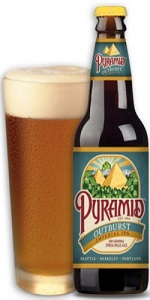 Rated by SushiSakeBeer from Oregon

Reviewed by redresonatedragon from Washington

Pleasant but a bit boring, this has a vague citrus vibe and a bitter finish. Very drinkable; forgettable.

Reviewed by Nvrmind16 from California

Reviewed by BenDorigan from Oregon

2.85/5  rDev -24.2%
look: 3.25 | smell: 2 | taste: 3.25 | feel: 2.75 | overall: 3
Light copper-orange color. Aroma is a tad skunky and medicine-y with the obligatory sweetness of an Imperial IPA. Taste is unbalanced but not bad. Alcohol is forward lending to medicine notes. Heavy malt sweetness and mouth feel tries to balance againt sharp, pronounced, biting hops (extract?) that are immediately evident, and linger, though don't necessarily stack swallow to swallow. Overall, an absolutely drinkable Imperial IPA, though shy of being a work of art. "Klunky" is a word that comes to mind, as well as "sharp" or "less than smooth." Still, it's the right price and not bad at all on a cold, wet winter day. Don't let my uber-criticism keep you from trying one yourself.
Nov 09, 2017
Rated: 4.91 by ViggieMech from Florida

A pretty standard pour yields a huge three finger head into my willi glass, must be pretty carbonated. The head actually looks quite nice, just a hair-off white, frothy and pillowy. The body is a dark copper color, deep shades of red and brown. Visibility is very low, carbonation looks very high. Head retention so far is amazing. So far, a good looking beer.

The nose is not bad, a little bit of dms I think. Not overly sweet other than that though, which is good for a double IPA. A little vegetal at first. Further sniffs give way to some nice fruity aromas, strawberry, mango. Hops are there, but not in super large effect. There are some off aromas here, but this isn’t bad.

The flavor hit for just a nano second with that vegetal taste, but only briefly. It then leads into those really nice fruit notes – I get a good amount of strawberry. A hair biscuity. It’s quite sweet, and it definitely has a supporting malt backbone, but not in an extracty way. I should also note that I doubt they are adding any fruit flavoring to a beer marketed as a simple double IPA, I think these fruit flavors are authentic from the hops. Maybe they add sugar, but I kinda doubt that too, considering there would already be plenty from the grain bill. Has a hair of a booze tinge at the end, but just barely, it’s perfectly fine. Hops are present, but not making much noise - not unheard of in a double IPA, with so much else going on, but that doesn’t mean I’m going to like that aspect! Has a little bit of that soft, almost creamy taste some IPA have these days. Definitely drinks more like a sweet, fruity, single IPA. Honestly, this is quite nice.

The mouthfeel is decent. Somewhat sweet, though the sugars don’t stick too much, it’s reasonable. Bitterness is not much of a factor, lingers for a very small period of time. The carbonation is quite low, which is surprising for a number of reasons; this is not terrible, but I would desire a higher carbonation. Body is on the lighter side, again, not a huge problem, but I would prefer something heavier. Overall it’s ok.

The drinkability is very high for a 8.5% double. I’m quite enjoying drinking this, and with no hesitation.

The appearance turned out magnificent. Head retention was bonkers. I had a full head for at least half of the glass, as well as a good half head for the rest. Lacing was thick from top to bottom. Wonderful looking beer.

Overall, this surprised me, considering how low the last Pyramid beer was. This is a pretty good double IPA, and I’m pretty picky about my double IPA’s. The flavor is solid, and a little unique. Not much more to say, good beer.

Reviewed by MeanMotaScootah from California

3.51/5  rDev -6.6%
look: 3.25 | smell: 3.5 | taste: 3.5 | feel: 3.75 | overall: 3.5
I've seen this at the local beer stop but just passed it up so I finally picked up a sixer. Pours a straight brassy color. Medium head, carbonation was about right. Aroma was malty, pine with a bit boozieness peaking through. Taste was very malt heavy, lots of sweetness coming through - a bit odd for an IPA. Not super hoppy but there is definitely some resin-pine hops on the finish. The taste overall is thick and malty with the hops taking a back seat for the most part. I doubt I'd buy this again but I thought I'd buy since I do respect Pyramid Brewery.
Mar 11, 2017
Rated: 3.94 by Brob245 from Missouri

Rated by 8BaconBits from California

Rated by Bali_hi from California