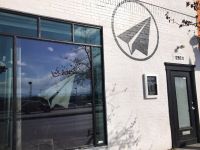 Rated by CraigDeMoss from Kansas

Reviewed by spontaneously_fermented from Virginia

Visited on a Sunday during labor day weekend for Phish shows. Lots of "phans" at the brewery which made it a bit overwhelming for one bartender (who said they don't get that busy on a Friday night). Had a golden sour, bottle pour of hoppy sour, and a fruit sour. All fantastic. Well-done interior and when you go to the bathroom, you get a view of the rectangle fermentation tanks.

Rated by bullywee from Colorado

Reviewed by 303Brewser from Colorado

4.56/5  rDev +5.8%
vibe: 4.75 | quality: 5 | service: 4.5 | selection: 4
This is a great little brewery in the burgeoning S. Broadway strip. The decor is sparse but hip and the bartenders are all very friendly. Ty has a great personality and remembered me after only stopping in once. The beer is special, unlike the normal lagers and ales you will find all over this great state. With only 5 or 6 beers available on tap most days, the selection could be better, but what they are pouring is always top notch. If you like unique and experimental beers, you owe yourself a visit.
Dec 12, 2016

3.99/5  rDev -7.4%
vibe: 4.25 | quality: 4.5 | service: 4.25 | selection: 3
so former future abandoned itself and went full time in its space with black project. i think its a good move, i mean, i really did enjoy former future beer, and thought the whole experience here was constantly improving, so its a little sad to see it go, but this is the right move from a business standpoint in this market. same vibe in the taproom, maybe a little less busy because it prices some folks out, but still mellow and cool. selection is an issue like it was when former future opened up, just three or four beers on tap and a bottle or two at a much higher price. i think this will get resolved over time. the beer is killer, i had a fractional raspberry wild that was tremendous, and a bottle of the lunex coffee blonde sour, which was to die for. i am excited to see the beers these guys come out with! i think its great the committed to a taproom. i mean, labor and time intensive beers in low quantity does not always match up well with a bustling on site crowd, but i think they will make it work. pretty stoked to have this right here in the neighborhood, obviously big things to come!

edit: both quality and selection are improving steadily in here. it used to be only a couple of beers on each time, but the last few times they have had five or six or more, and bottle pours available sometimes too. its nice to see these guys getting so much hype, i think at this point they deserve most of it!