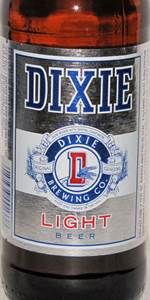 Grassy and grainy, hitting on cereal grains, 6-row barley, and little else - I guess a dash of caramel malt towards the climax, but that's it. Ester-free and clean drinking with no off-flavours. Well attenuated for a lighter lager, and not too sweet or syrupy nor too thin or watery...that's more than can be said about many attempts at the style.

There's no doubt it has more character than your run of the mill American macro (Bud Light, Natural Light, et al.) and it's certainly a drinkable beer, albeit a simplistic and shallow one, but it won't dazzle discerning drinkers and I wouldn't pick it up at its regular $7.99 per sixer pricetag here in its home state (I've also seen it sold in Austin, TX). A scratch-your-itch light lager with a bit more depth of flavour than most of its competitors but there's not much going for it elsewise.

12 oz bottle into a pint glass. Thanks to deepsouth for the extra.

Pours a clear medium gold with a finger of fizzy brite-white head. Peters out pretty quickly, leaving behind just a bit of retention around the edges and lacing. The aroma is an intial blast of bready malt sweetness, citrus, and then...well... not much else.

The taste is some light notes of sweetness and citrus with a just a tingle of a hop profile in the finish. Mouthfeel has a lighter medium body with an overall fairly crisp carbonation.

Not much too this guy. A bit more flavor and definitely more of an aroma would have been welcome. Decent body though, even if it was on the lighter side, helped keep this moderately drinkable.

Appearance: Light gold color with thick white head that dissipated quickly but what remained laced rather well for the first few minutes. Unfortunately the head faded away entirely, leaving the ugly liquid with nowhere to hide.

Smell: For the first few minutes there was a sweet aroma but also what seemed to be an alcohol aroma, which is odd considering that this is a light beer. After a few minutes, only a bad musty and medicinal smell remained. As it warmed up the aroma became downright awful.

Drinkability: Not very drinkable - too much alcohol presence with not enough flavor to complement it.

Comments: Looked and smelled a lot better for the first few minutes. Afterwards, the appearance and smell were not good. Taste isn&#8217;t great, but not as terrible as it looks and smells. Not as bad as some other light beers I&#8217;ve had, but I wouldn&#8217;t have it again. Thanks to schoolteacher and biruchan for the lesson. It was indeed a learning experience.