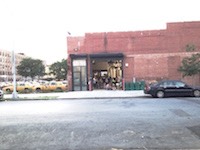 Industrial styled space in a large warehouse, with the front portion roped off as the seating/bar area. Bar is short, playing host to a smiling bartender and a half dozen stools for patrons. Remainder of the seating is a few 2-top tables and some high-top long tables, which are on rolling wheels that don't lock (ut-oh!). Space is pretty sparse, focusing attention on beer and conversation. Staff was friendly and helpful. Selection spans an array of styles, but most definitely focuses on hoppy work with a few lagers. All total, it's a good brewery experience.

Partitioned warehouse tasting room with short bar opposite entry that seats maybe 8. Additional tables on floor and garage door that opens on to street. 8 beers on tap,the one I had was solid. They sell cans to go.

Great spot to visit...enjoy their fine brews on tap, plus growler and cans to go, see the coolship, get some meat from the automated meat dispensing machine, free popcorn, friendly bartender....mid sized room, about room for 10 at the bar, two or three long high top tables, they open the rolling gate in warm months and move the tables onto the sidewalk...add in food trucks and/or food pop ups on the weekends....go and enjoy this inviting. fun and fully worthy Queens, NY spot

this was as good as i hoped it would be, a smallish taproom, but very cozy around holiday time, with lights and decor around, a real mellow but classy sort of vibe, lots of barrels around, the brewery behind the little bar, which bisects the space, separating the working part from the drinking part, they have a done a cool job making a warehouse space feel homey, and i really liked the feel in here. the bartender was awesome, friendly, chatty, knowledgeable, and generally carrying a pretty high degree of stoke, which is always becoming. they had a solid selection of stuff, a few saisons, a few hazy ipa types, and a few dark ones as well, a well balanced list, maybe somewhat less ambitious overall than i was expecting, at least on the board, once i got into them there was a lot of cool nuance, new york state grown ingredients and such, but styles were relatively conventional i thought. that said, every beer we had here was killer, especially the humming dragon ipa, but i truly dug every beer we had, and the quality overall was very high across the board. this is one of the places we hit in the city that i would put near the top of my list to visit again, especially this time of year, its exactly what i want in the taproom experience these days, and i could have spent all day and night at the bar here. it was good to finally get to drink a bunch of their beer too, they really are making some great liquid!

I’ve visited most Breweries in the area and I know that that any building in any of the five bouroughs is a huge financial reach. In order to make in NYC, you have to take the bare bones and brew high quality beers and offer an environment appreciated by those who visit.

LIC has done it all. A real feel experience, served by lovers of beer, and a view into the brewery ‘s love of their craft.

A must visit and easily one of the finest brewers in the 5 boroughs.

Always a good spot to go to in NYC - love the staff and great brews. Atmosphere is very nice and open with music and cool events on a weekly basis. Good variety with IPAs, stouts, saisons/grisettes, sours and other styles on tap with plenty of options for growler fills.

The best beer in N.Y.C hands down. Rivals any beer I've had anywhere. My favorite spot when all that matters is the juice. Brooklyn gets the hype, Queens has the goods. IPA at its finest!

Fantastic once you find it. Outstanding beers with top notch IPA, scouts and I believe a saison during our visit. I would rate the beer overall 4.75 with all I tried tasting well made. The space is fun on a somewhat industrial block in LIC. Bar staff was excellent and had the absolute best taste in music of any place we went to overcome weekend. I would put this as a must go to for anyone visiting NYC.

My type of brewery. Intimate taproom although it's a big space. Sitting among barrels of aging beer is always desirable.

There were too many beers on tap that I wanted to try and what I sampled was far too good for me to choose from. I would like to come in every day for a week just drinking their selection. Great stuff.

I'll just say now that I think these IPAs give the country's best a run for their money.

Service is friendly enough and a low-key crowd comes in.

This is one of the cooler indoor taprooms I've visited. Really fantastic/rustic Scandinavian design, highlighted with wood accents and white brick walls. Plenty of seating both at the bar and at tables. The corn hole set up was a nice little change of pace while we were drinking our beers. Very design forward, which is always appreciated. One strange thing was the lack of music. For such a big space, it was strangely quiet. Could have used some help from a stereo.

They had four beers on tap, which I was a little disappointed with. No option for a flight, so I got two pints, which were seven bucks each. The beers were above average, but I wish I could have tried them all without having to fork over thirty bucks. Bartender was great and very helpful.

Overall, impressed with the space and would like to go back in the summer when they open up the garage doors. Selection and pricing left something to be desired.