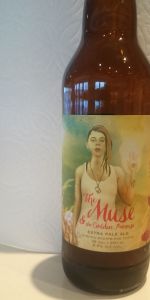 Notes: None
View: More Beers
Recent ratings and reviews.
Rated: 3.56 by IPAnicked from Canada (BC)

Taste - Mainly bready malts and grains, along with mild bitterness from the floral hops and a touch of caramel and soap. Almost tastes like a hybrid of a blonde ale and an APA.

Mouthfeel - Medium bodied with moderate carbonation. Finishes with a lingering hop bitterness on the palate.

Overall - A unique brew that displays elements of an American blonde and American Pale Ale. I was expecting more hop forwardness, but regardless, it is quite enjoyable.

Reviewed by mattsander from Canada (AB)

This beer pours a slightly glassy, medium golden amber colour, with three very Rubenesque fingers of puffy, loosely foamy, and fizzy off-white head, which leaves some random sudsy island group lace around the glass as it evenly sinks away.

The carbonation is quite active in its probing and otherwise supportive frothiness, the body a decent middleweight, and generally smooth, in a breakfast cereal sort of way. It finishes off-dry, the lingering complex graininess watching the attendant green and citrusy hops start to struggle to pull their own weight.

Overall, a well-made blend of New and Old World ingredients - the British malt, the Yankee yeast, and the (Canadian?) hops. At any rate, this is a pleasantly engaging blonde ale, something that I am historically not accustomed to uttering. But, aren't muses good at influencing that sort of thing in the first place?

Reviewed by Ghrymm from Canada (BC)