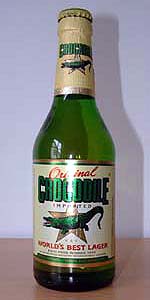 Appearance an odd cloudy murky yellow with little to no head or lacing. Aroma skunky, getting sweaty socks. Taste is slight resiny hops and sweet malts. Feel is not much, leaves the usual adjunct corn sweetness. Not the best but very easy to drink and not half as bad as what I was expecting. Fine as lawn mower beer and has its place.

Tacky enough pic of a crocodile for the logo, looks really cheap and one would never guess that this is a beer brewed in Sweden, where there are, as far as I know, no crocodiles.

Looks ok on the pour, a nice clear golden coloured beer with a small whitish head that sticks around. Some small carbonation. looks not bad.

Has a light lagery aroma, very light on the nose, sweet malts, corn and the yeast. A faint smell.

Taste is water, pure water, minimal to no taste, wow. I guess I might have got the taste of some malts at the start, but I am not sure, it might be my imagination! Flattens out real quick.

Shit beer. One of the worst I have ever had, couldn't taste anything, all the tastes must have evaporated in the bottle.

Not even good enough for necking. An easy one to rate, a big fat zero!

Got this from a co worker. Strange sweet taste. Not a good beer.

Bottle: standard green 330mL bottle, really tacky-looking label. I could have sworn this was from Thailand or something, though maybe that is the idea as apparently one should 'Serve Cool - When The Heat Is On".

Appearance: a slightly hazy pale yellow in colour. A huge white head puffs up and drops to a half-centimetre which hangs about for a bit and leaves a sporadic lace.

Aroma: no surprises since this is an adjunct - smells of not much more than cheap grain, rice and whatever other bollocks they normally put into these cheap export adjuncts.

Taste: some sweet grains with a touch of grass hops. Really not much to it, to be honest. I suppose the idea is that when you're slamming them down you don't want it to be too intense.

Aftertaste: disappears quite quickly with only a metallic feel and some cheap grains.

Mouth feel: fine, but not quite suiting the 'SEA tropical climate' style they were going for. Light- to- moderate in body with a moderate- to- higher carbonation. Seems like it should be a bit lighter in body with more carbonation. Still, went down quick and easy.

Overall: living in Queensland Australia, I have to admit that this one goes down easy as that Australian / South-East Asian hot-weather beer. Still, there are so many options from local and SEA breweries, not sure why you would buy a Swedish export version for a bit more money when it is not quite as good. Nice try, but not quite.

Appearance: Crocodile Original pours a icterine colour along with an airy white crown of some stature, eventually leaving a layer of lacing. Plenty of carbonation.

Smell: Phenols, rice, and various adjunct-characteristics (such as flour, white bread, corn, corn-starch etc). Possibly chlorine and some citric notes do make the odd appearance, but they are neither powerful nor subtle, just weak and artificial.

Taste: Metallic, artifical with some corn-starch sweetness. The metallic touch in question does leave a weak, yet nontheless, lingering artificial nine-volt battery-bitterness in mouth -- as well as in mind.

Mouthfeel: Thin as the can it came from, full as the same can once I dispatched this failure to its rightful home.

Drinkability: Had to pour this one out -- in the toilet as I werent able to finish it (and since that's were piss belongs anyway).

A: Pour is clear golden with some small bubbles. The head is medium large, white and kind of uneven and airy. Dissipates at a medium pace and leaves some lacings.

M: Aftertaste is rather short, kind of unpleasant corny sweetness. Body is light and carbonation is rich, kind of offensive.

D: This is not nice beer.

0.5l can poured in an ordinary glass.

A: Clear pale yellow color with a one finger head.
S: Strange smell I would say, it smells malt grains and yeasts but also something that I've never felt before in a beer... (Plastic?)
T: Terrible plastic aftertaste... Urgh... I don't know exactly what it is, I guess it's corn or sunflower grains. That's just terrible...
M: Light body. Medium carbonation and light bitterness
D: Low. Terrible "beer". Just avoid it

pours a straw colored liquid with a relatively firm head ...

smell is rather strong, with a dominant sunflower note ...

taste is rather light, with a dominant pink grapefruit note, the bitterness is not very well married with the sweetness ...

From my notes 6/11/07 pours a one-finger white head that quickly goes to a thin layer, leaving some lace. Crystal clear amber color. Hoppy/skunky nose. Light carbonation and light bodied. Flavor is hoppy with a watery skunky finish. Claimed to be world's best lager - wrong. S.Fr. 3.60 ($2.93) for a 330ml green bottle from Drinks of the World Lucerne, Switzerland.

The colour is pale yellow with a hint of gold. The white foam sinks quickly down to a lid, leaving some lacing.

The smell is weak with some loaf-like sweet notes and some hints of minerals and a touch of bitterness.

The taste is very sweet. Some mild notes of malt and white bread. The aftertaste got some very light bitter notes with some minerals and metal. It finishes with even more sweetness and some alcohol.

The carbonation is pretty strong with lots of small bubbles. The liquid is somewhat creamy and a bit sticky.

An odd beer. I dont really get it

I just don't get where Swedish brewery Krönleins is going with this beer. It's an Australian-inspired lager produced by a West Coast Swedish family brewery and heralded as The World's Best Lager.

Appearance - straw coloured. Somewhat watery. Bleached white head that instantly evaporated.
Smell - faintly chemical, metallic, hint of citrus, but you have to search for it.
Taste - basically like a dozen other industrial macro lagers, offering little and lacking a lot of everything
Mouthfeel - fairly average carbonation, with faint malt and then hop aftertaste that fades fast.
Drinkability - If I'd broken down in the Simpson Desert and had already drunk the water from my car radiator and was left with a choice of drinking this or my own bodily fluids I'd drink this.

But it would be a close call.

Poured a pale golden yellow colour... White head poured quite foamy and faded to almost nothing... no real lacing...

Crocodile Original from Krönleins Bryggeri AB
Beer rating: 62 out of 100 with 23 ratings