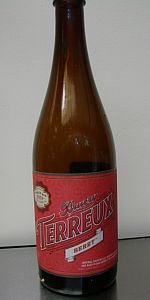 Notes: Beret is as artistic as those who wear its namesake cap. Our brewers developed a silky, full-bodied wheat ale which we began fermenting with our house yeast strain. To finish the fermentation, we added our collection of barnyard bacteria, intended to slowly sour the ale, bringing out a slight funk and refreshing piquancy. Finally, a small dose of pureed raspberries were added for just a hint of fruity tannins, putting the berry in Beret.
View: More Beers | Place Reviews
Recent ratings and reviews. | Log in to view more ratings + sorting options.
3.5 by TMoney2591 from Illinois on Jan 21, 2022
4.5 by LennyBound from Illinois on Oct 12, 2021

Bottled 5/19/15 and consumed early August 2021. Not a huge fan of wits or wheat beers in general but this is a truly special interpretation. An impressive improvement upon a base beer I'm sure they could release separately. Subtle fruitiness complements the funk. Seriously drinkable, especially on a warm day. This is almost in farmhouse/saison territory.

Enjoyed this beer with a fine gourmet Cajun meal that included seafood étouffée. Poured a clear golden yellow. At the end, the sediment added both some murkiness and flavor. Very tart but clean taste. Smell and taste of lemons and other tart fruit. Floral and a bit spicy, peppery. The sediment gave a new funky dime to the beer. This was at the end of the beer, but it was sufficiently good to boost the taste score. Enjoyable beer and a very enjoyable date night with my wife.

Nice fluffy head but for a Raspberry beer I'd expect this to be more bright red. Nose is tart peach, apricot, vinegar, seedy raspberry and other stone fruit. Nice and very aromatic. Beer opens tart peach and vinegar up front. Super duper sour. Seedy raspberry appears in the middle that imparts a touch of bitterness. Foamy at the finish but puckering all the way through. A little too acidic for me. Body is light with ample carbonation. Prickly and foamy on the palate and goes down puckering. Lingering, filmy aftertaste.

This has to be one of the most sour and acidic beers I've ever had. Not a fan of how over-the-top this one is.

Another great sour from Terreux. Poured from a 750ml bottle into a tulip.

L: Hazy Golden with a slight pink hue from the raspberries

S: Tart lemon fragrances hit the nose initially and are followed by a slight raspberry aroma. Finishes with a nice brett and funk smell. Complex enough that each whiff smells a bit different than the last.

T: Very tart, lemons, raspberry, wheat backbone and some barnyard funk at the end. Finishes very dry and makes you pucker. ABV is completely hidden despite being 9%

O: This is an extremely sour and tart beer with not as much raspberry flavor as I was expecting, but great nonetheless. However this one might be a bit too sour even for the most seasoned wild ale veteran. Sadly the taste is not as complex as the nose except for some complexity in the barnyard funkiness which only presents itself towards the end of each sip, which I chalk up to the tartness overpowering other less present flavors. I really enjoyed it but others I split the bottle with were not so pleased with the tartness and were expecting more wit and berry flavors. Picked it up on sale at a local store for $4.99 and at that price I'll be returning to buy out every other bottle they have very soon, assuming someone doesn't beat me to it.

Tasted from a 750 ml bottle in a red wine glass.

L - Medium gold color with a hint of pink. Slightly hazy. Fizzy white head from the initial pour quickly fades to a ring around the glass made of infinitesimal bubbles. Light lacing.

S - Complex blend of aromas. Sharp, lemon-like sour note over strong raspberry. Below that is oak and at an even lower level there is some faint barnyard Brett. character.

T - Lemon juice tartness wrestles with fresh raspberry flavor. Later in the palate are some earthy and tobacco flavors, along with Brett funkiness.

F - Medium body with low carbonation. Hops bitterness is not detectable. Huge sourness burns the back of the throat and tongue and burns some more on the way down the throat. Moderate alcohol heat that pales in comparison to the sour burn.

O - This is a supremely sour beer with deep, complex flavors and aromas. I'm not shy about sour beers, but the acidic bite here is a bit more than I prefer.

Appearance: A cloudy dark golden orange colour with a big three finger white head that had decent retention while leaving some nice lacing.

Taste: Sour, tart, raspberry, cranberry-apple, wheat, lemon-lime and Belgian yeast with only a hint of oak and funk.

Overall: This was ok, but not quite as much raspberry as I hoped for. I was surprised by the higher than expected ABV though, as the alcohol was well hidden.

Hard pour into a brandy snifter produces a inch of white fizzy head, body is slightly dark gold with no lacing

Overall I was anxious about buying this due to the age but it held up great, very sour to the point of being puckering, they nailed this one and will definitely be seeking out more of the Terreux offerings.

Another in the long list of "how have I not reviewed this yet?" Pours relatively golden, small 1/3" head on it, white in color. Aroma of wheat and raspberries. Interestingly enough, there is a mild cheese like funk on this one. Bruery usually don't do funk.

Taste, similar to Bottleworks XII, this seems to have wheat base and raspberry added. The acidity and sourness aren't face melting, which is finally nice after a 1-5 year run on stuff like that. Carbonation where it should be. Hides the alcohol very well. Oak isn't very noticeable. This is one of the more underrated beers in the Bruery's wild ale portfolio. Still like the peaches & vanilla version more though.

Poured in a large Piraat tulip, Terreux Beret is a murky sunset with a thin white collar and some scattered lace on the inside of the tulip.

Smell is lactic acid and raspberries, pure and bright.

Taste is similar, but with some sweetness, coconut from the oak maybe, giving some balance to the well integrated fruit. Just a little tart. Really nice.

Drinkability is high, this is a fantasic lacto fruit beer that exudes balances and keeps bringing the word "pure" to my mind. Best fresh for the fruit, although I don't see a date on the label, but did just buy this today from high-turnover cooler.