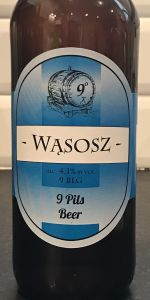 Notes:
View: Beers
Reviews: 2 | Ratings: 3 | Log in to view all ratings and sort

From a large brown bottle, this is a crystal clear, golden brew...the head is think, white, and whispy. The aroma has a nice malt note, but also has some cereal scents. The taste is balanced, if not just medium-dry. Medium-full body. Okay.

A: Pours a relatively clear medium golden honey in color with moderate amounts of active visible carbonation rising from the bottom of the glass and moderate amber + copper + medium golden yellow colored highlights. The beer has a finger tall sudsy foamy light beige head that reduces to a couple of small patches of medium thick film surrounded by a large patch of thin film covering the remainder of the surface of the beer and a thin ring at the edges of the glass. Light to moderate amounts of lacing are observed.

S: Just shy of moderate aromas of toasted + bready + caramel malts with a slightly heavier than light amount of caramel sweetness with a hint of grassy hops.

T: Upfront there are moderate flavors of toasted + bready + caramel malts with a slightly heavier than light amount of caramel sweetness as well as a hint of cardboard. Light hints of grassy hops which impart a hint of bitterness in the finish which linger slightly leaving behind light notes of caramel malts.

M: Medium bodied with moderate amounts of carbonation. Slightly soft in the mouthfeel.

O: Drinks fairly easily with well hidden alcohol but missing the crispness that I expect in a good pils and not quite clean enough in the finish. There is no bottle dating on this beer but it almost tastes like it is a little oxidized.

Polka Pils 9° from Browary Regionalne Wąsosz
Beer rating: 3.32 out of 5 with 3 ratings