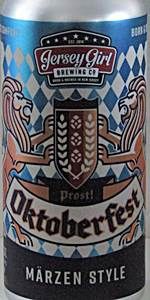 Notes: Oktoberfest started as a festival where the citizens of Munich were invited to attend the festivities held on the fields in front of the city gates to celebrate the royal wedding of King Ludwig I and Princess Therese. In honor of this celebration we have brewed a medium bodied, Amber lager brewed in celebration of Oktoberfest. A sweet bread-like malt character leads way to a dry finish.
View: Beers | Place Reviews
Reviews: 7 | Ratings: 15 | Log in to view all ratings and sort

Poured from undated can into a seidel. It pours a clear, honey-amber color with a half finger of long-lasting, creamy, eggshell-colored head and thick, soapy lacing. It has lots of tiny bubbles. A good Märzen aroma of grain, caramel, and lite spicing. This is better than I expected. The taste opens with a nice dose of caramel, brown bread, and burnt nuts with lots of pepper and spice at the finish. It's actually quite bitter at the end which nicely balances the initial caramel sweetness. It's medium-bodied with lively carbonation and the 5.9% ABV gives it a pop without being heavy. The disparity in the ratings is interesting; BAs seem to either really like or dislike this Märzen. I was pleasantly surprised. The flavor is nicely complex and it's not overly sweet. And the appearance is lovely.

Medium light carbonation. Body is about medium but has a bit of a slick,thick feel I often associate with wheat beers
..aroma is malty,dark bread, floralcitrus wildflower honey. A little earthy and caramel
..taste is really nice mix of mild sweetness with an equally mild hop finish. There's malt,floral citrus wild honey,caramel and dark bread.
Really nice New Jersey version of an iconic style. Really enjoyed this one.

First time having this beer, as I was away during Octoberfest season this year. Can't remember when I traded for this, as there wasn't any dates to be seen among the writing on the bottom of the can. Although I'm not a huge fan of this style, I enjoyed this and how easy it was to drink, without being too light or watered-down. A good example of this style should be accessible after the season's passed, and that was the case with this brew!

This had a nice, copper hue to it that was fairly radiant and mostly clear when held up to the light. Nothing big floated in it and the head was sufficient, but not massive. Most of the lacing left down the side of my pint glass was in the form of thin rings that bled down to the one below, as the soapy splotches covered quite a bit of the back side. Lots of nuts and dark bread in the nose as there was some spice thrown in for good measure. The taste certainly followed up on that but almost felt like a Wassail, with some herbal tea followed by hints of caramel. Underlying German hops rounded things out as this was quite dry, and balanced on the palate, without much carbonation to clean things off between sips.

The booze was spot-on as well as it would have been easy to enjoy another one of these had there been more cans of this on hand. No, this wasn't a session beer but it was what I'd expect for something of this style as this wasn't too cloying nor had an excessive amount of dough on the palate. Anyone looking to celebrate the fall would do just fine with this beer although it wasn't the best of it's kind that I've had. Worth a go once to celebrate the festival, even if I was late for it this year!

Pretty, light amber color with good clarity and a frothy head that takes it's time before dissipating.

Very smooth and clean in the finish. Light on its feet without sacrificing flavor. Medium bodied. Seriously impressive!

Bought this on a whim because of the great price point ($8.79 per 4-pack) and the fact that it's local. Turned out to be one of the best Oktoberfests I had all year. Will definitely buy more of this next year.

DATE: October 13, 2019... OCCASION: trying to figure out what to do with the Browns after their lackluster performance at home against Seattle... GLASSWARE: 22 oz. pilsner... a murky iced tea body, orange amber with a fresh off-white head that rings nicely... no effervescence to speak of... light caramel, toasted bread malts, a bit of metallic hops, and mellow leaf... nothing outstanding, but pleasant enough... first sip is smooth and welcoming, with a dry feeling at the throat--it is well within its genre, but it doesn't have a lot of energy or life... it does have a modicum of caramel, but this one features the sharpness of noble hops and sticky sweetness--the toasted malts in the aroma are not all there in the flavor profile... happy the locals put out some good fests this year; this one probably fights it out for second best, with a few odd notes at the finish (hard fruit, banana, funk) that make more a lager an less a festbier...

Pours a light amber color with a 1 finger head that dissipated quickly. Taste is malt forward with some bready flavor. typical of a Marzen Oktoberfest style.

Would purchase and drink again.

Oktoberfest from Jersey Girl Brewing Company
Beer rating: 84 out of 100 with 15 ratings