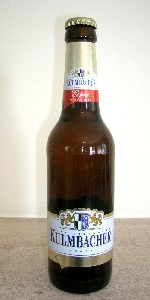 A very nice and refreshing beer.

A: A straw yellow color very light and clear with a medium white head that remains for long with good carbonation formed a permanent layer on top that remains almost until the end.

M: Very refreshing and with some sensation of sweetness that is very faint but present, the bitterness is moderated as should.

This beer pours a clear pale golden hue, with one finger of soapy white head, which leaves some nice webbed lace around the glass as it melts away. It smells of sourdough, crackery malt, and earthy noble hops. The taste is sweet white grain malt, bready, a bit sour, with some floral, weedy hops, and a tinge of alcohol astringency. The carbonation is slightly on the low side, the body decently weighty, but a bit clammy, and it finishes dry and zippy, the hops coming 'round to bear.

An adequate deutsche lager, but a bit crass overall, seemingly lacking any nuance.

Standard pils/lager look, bright, clear and mid-golden in colour (lighter than a Dort). Lovelly snow white head sat on top of each pour. Trails of bubbles could be seen rising up through the beer, so plenty of life, or at least well carbonated.

I struggle to find much aroma from most lagers, this was no exception, gets my average score of 3 for smell.

Refreshingly crisp with a dry bitterness towards the end of each gulp. I thought I detected corn or wheat more than barley at first, but it became more like a regular German lager/pilsner as the tasting progressed. No huge flavours, just a well balanced light coloured Export Lager.

The label said it was 'Wurzig-Mild', can't argue with that!

One of the fullest bodied lagers I have had in awhile. Big fresh mouthfeel, lots of hops and a clean dry finish. This is the export style at its best ( bigger than a pils). Wonder why not many people have reviewed this but rest assured I will buy more this Spring

Review based on notes

S: Soapy & grassy hops, plus some breadyness as this warms

Drinks alright, typical of the style nothing special here

Lots of head initially on the pour, a mountain of sticky fluffy white foam which still dissipates at a steady rate, leaving nothing but random strands of lacing to prove it ever was there in the first place. Clear golden body in appearance, a fair amount of carbonation.

Light biscuity malt on the nose, some grain, with light floral hops. Also the faintest hint of veg, but it doesn't seem to detract from it all much.

Flavour profile is fairly decent as well, light grainy malt up front, with fuller-bodied biscuit malt appearing in the middle and holding its ground with the mild metallic twang from the grains. Grassy, floral hops on the finish, even a bit spicy on the aftertaste.

Mouthfeel is light but has body as well, the carbonation is mild but effective.

Overall a decent above average helles, it's not overly memorable, but is enjoyable nonetheless, refreshing and quenching without being offensive, that sneaky veg didn't prove to be an issue after all.

A: pours a clear, bright, yellow-gold with a 1 1/2 finger white head that quickly reduces to a thin layer of film. Tons of rising carbonation bubbles. Leaves a little lace.

S: Sweet grassy hops with a touch of spice on the nose.

T: Floral hopiness up front with a clean, sweet, bready finish - not outstanding, but refreshing.

D: A decent German pils. Easy to drink and has some good flavour characteristics. Nothing spectacular, but still alright. It would make a good session beer given it's light body. I wouldn't go rushing back, but I would buy it again in the future.

Crystal clear, pale gold with a generous foamy white head. The head has some staying power.

Cut grass and a slight peppery smell. Rather tame, but not bad.

Sweet malt, with a slightly metallic hop bitterness. Lingering bitterness after finish. Not a star as far as German Lagers go.

The body is there and carbonation is strong but not overdone. Decent mouthfeel.

Wouldn't look for this one again. There are better lagers available.

Overall: although this beer is classified as a Dortmunder/Exporter I did not see much difference from any macro lager that we can find in a supermarket shelf.

A bright golden colour with a correct head that disappears soon. Hops and floral aroma. Light bitter flavour. Palate is a light bitter, some dryness, sulphury. Clean finish. A good correct beer, very refreshing in summer, but one that you can drink at any time.

Appearance - Exceptionally clear with a bright yellow/golden colour, fairly typical of the style.

Smell - Quite malty, although fairly subtle overall. Smells nice but nothing special.

Mouthfeel - Feels like a lager, not much I can say here really, nothing special but pleasent overall.

Drinkability - Very much so, quite quaffable not too overbearing but enough flavour to keep you going. A good summer session beer.

Overall this beer was tasty enough and went down quite smooth, but it didn't have any characteristics that jumped out either, so its fairly middle of the road in the end.

Comes in a German standard brown half liter bottle with gold foil around the neck and a white and gold label featuring a coat of arms and "The legendary" above the name. Purity law, of course. Best before 12/4/04, I opened it on 5/30/04.

Poors a pretty standard clear gold under a healthy 1.5 finger white head with some contour and a bit of staying power. No lace. The nose is very mild, with just a touch of barley malt. The mouth is prickly and one shade heavier than light. There's a good bit of malt here, not quite sweet and very smooth. This is followed by mild metallic hops, which give the finish a bit of an edge. The bitterness lasts into the aftertaste, where the maltiness dares not return. This is an OK beer, but nothing to get excited about.

Kulmbacher Export from Kulmbacher Brauerei AG
Beer rating: 78 out of 100 with 19 ratings