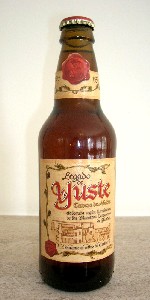 Tastes like alcopops, maybe some girls would like this. Though it´s simply not a beer that should exist

From Carrefour. In Legado de Yuste glass. Watching Breaking Bad 5x01.MG! This an abbey beer? Any monk would be ashamed of this junk. Brewing this is probably be unholy, a sin. Seems like a bad sweet macro lager

330 ml. bottle. Amber colour, off white head that fades soon, leaving a minimal lace. Smells of damp earth, some faint notes of caramel and fruits. Too much carbonation for a light body. Taste of caramel, with some spices and herbs. A big company trying to say they make good beer. Just a normal one, and not much to do with a real abeey beer.

The liquid is clear, the beer is obviously filtered. The colour is copper (22 EBC), the off-white two finger head sinks rather quickly down to a thin lid without any lacing.

The smell is quite bitter, it is a clean almost chemical bitterness. Some earthy frowsy notes of yeast (autolysed?). Exotic fruits, yeasty-spicy notes. Hints of leather. It is like an odd mix of an old lager and a Belgian ale.

The taste got some Belgian yeast notes, clean bitter notes and a fruity sweetness (apricots, bananas, pineapples, blue grapes). Passing chemical alcohol flavours. Some toffee. The body is surprisingly light. The aftertaste got warming alcohol, yeasty flavours of earth and Christmas spices and a dry note of green bananas. The finish is short with some fruit toffee flavours.

The carbonation is mild, the small long-lived bubbles tickles the tongue. The liquid is light with some creaminess.

Considering the ABV, this beer is very light. The taste is better than the smell, though.

Served from 33 cl bottle into a goblet. The label says it is an Abbey Beer in the Flanders tradition.

A - Medium copper color and very clear. Head is off-white, fluffy and thick. The head is fairly persistent and leaves good lacing.

S - If this is an ale it is the most lager-like ale I've ever smelled. It smells like a Vienna lager to me, not a Belgian ale. Bready malt, noble hops, some dark fruit, faint brown sugar and a bit of sulfur-tinged yeast. It is a good smelling lager, but way off the mark as a supposed Belgian Abbey style.

T - Taste is of bright noble hops and bready malt. Some brown sugar and maybe a hint of plum. No yeast notes. Like the aroma, all the elements are appealing and clean, but not right for the style.

O - This is a well-made beer that does a lot of thing right in a generic way, but should not be called an Abbey Ale. As a Vienna lager or even a German Bock I would give it respectable ratings. I appreciate the effort by the brewer in a nation where beer is almost all a fizzy, watery, yellow afterthought to wine, but it needs some truth in advertising.

Suggested by our server at Duduá Palacio Restaurante in Madrid.

S= not bold but nice, some dark fruits, rusty malts.

O= fairly decent darker Belgian style clone, at least compared to many US micro & craft Belgians (but of course nowhere near the quality of Ommegang offerings!). The server was proud that it was indeed a "Spanish beer."

Daniellobo (reviewer below) states that the brewer actually calls this a Vienna style lager, and it may well be. But before I read or heard the Belgian hype it impressed me as a modest Belgian Dubel, or at least seemed to have Belgian yeast flavor.

Served onto the Yuste chalice and poured very violently getting not that much of a head, that dissipated very fast and left no lace. The body is a bit murky copper which is quite nice for the style and saves the appearance
A smell of a bit roasted malt and nothing much, average at its most.
A weird taste, metallic and comes from a bottle, you do not get many of the roasted malts that went on in the smell. It also has a strange mouthfeel with a lot of carbonation.
Not a well rounded beer; and I doubt Charles V enjoyed this beer if he had the chance.

The beer has a light copper color, clear and clean. Quite good foam, but it falls quickly.
Both in the flavor that in the smell there is clearly a full malt whit reminiscent of the malt whiskey rather well. Definitely a beer that does not focus on the hops, but on malt.
In the mouth there is plainly the presence of sugar candy, but not so unpleasant and "load" as one might expect from an industrial beer (Heineken).
Aftertaste that always rely on malt, with notes from barrel to roast, and even if you don't feel the hops (just a bit), the beer is not so unbalanced (although very full-bodied).
At the end we can say that beer is altogether sufficient and unique, without being an absolute masterpiece; that is to say that you can thinks to prove it.

I had this beer at Beer Station in Madrid.

Legado de Yuste pours a clear, golden copper in color, and is topped by an off-white head that fades to a sudsy film. The aroma is very, very mild. I had to really try to pick anything out. There was only a very mild fruitiness present in the aroma, which was joined by a hint of sweet maltiness when the beer was swirled. I really don't know how a beer can have such a mild aroma.

The taste was clean overall with nothing objectionable, but the lack of flavor. A neutral graininess upfront moved into a mild banana fruitiness in the center. The finish had a bit of chalky yeast, pepper, and dry hops. This beer was medium-bodied, and highly carbonated.

Overall this beer was pretty bland, but fortunately that was really its most objectionable quality.

Fair malty attempt, over-hyped locally and nowhere near the Belgium standards that supposedly inspired it.

Presentation: 33 cl. bottle. label design trying to evoque an antique feel around images of wax seals, warm earth colors and a sketch of an abbey. Back notes briefly the characteristics of the brew, and enumerates ingredients, bragging about the legacy used to craft the brew. Shows best before date (03/10). Notes Alc. by Vol. (6,5%) Poured into a tulip glass.

A - Deep amber pour with a rich head, medium to low retention and lacing.

T - A straight forward maltiness, a bit sweet, with a bitter touch woven in characteristic local skunkiness albeit a brief one.

M - Medium body, with rich carbonation, and a finishing if not extreme boozy sense.

D - It's a rich alternative in the barren macro Spanish landscape, and not entirely undeserving. Unless one can get their hands around better imports, which is typically not too difficult.

Notes: A lot of rambling about the empire heritage of Belgium brewmasters that had to join the Spanish king in retirement back in current Spain. Well, at least that is the story used to promote the beer, adding an idea of Belgium recipes with local ingredients. It's not a bad brew but price and hype locally set it up at a level that it does not deserve at all.

Ah, despite the admission of a Belgium heritage in the recipe, and by the brewery's own admission, this is not a Belgium pale ale, but rather a Vienna style larger...

A very one dimensional beer with a very one dimesional malt profile. It looks ok in the class with a long lasting offwhite head and a hazy orange amber body. The smell is of alcohol and sugar and the taste more of the same. It has a decent body, but the alcohol and carbonation both seem out of place, also making it not very drinkable. Not great, but not bad. I rated it low because it doesn't quite match the style and is pretty boring. However, I do prefer it to a lot of belgian pale ales I've tried.

It's not terrible, but definitely not worth the price that I paid for it. The first thing that I noticed was how strongly of alcohol it tastes. It's 6.5%, so not low, but also not high enough to taste like this. It leaves a poor aftertaste that is metallic. Not bad to try once, but wouldn't want to make it my regular beer... by any stretch of the imagination.

Not too bad, for a spanish beer - seems a lot like Cruzcampo's version of Damm's 'Voll Damm' (though this one's not as good).

A: clear, orangey gold, white head relatively thick but very little retention. seems very fizzy coming out of the bottle almost like a soda -even though it's been sitting still for hours. Little lacing does stick around.

S: getting almost nothing -very faint light toasted malt and alcohol, a hint of sweetness.

T: pretty fizzy, a sweet-syrupy bit, bit of fruit, and alcohol. definitely drink it straight down if you got it - trying to taste it properly results in heavy alcohol and not much else.

D: high alcohol flavor gets to me, and leaves a taste in your mouth in the end, overall not too impressed.

The name comes from the time when Emperor Charles V lived in the Yuste Abbey in Spain. The story says he liked Belgian beer so much that he ordered the monks from Yuste to brew a similar product in Spain. In my humble opinion they missed the mark.

Overall: I did not like this one. The appearance and aroma are OK but the taste is awful. Definitely not recommended.

Legado De Yuste from Grupo Cruzcampo SA
Beer rating: 71 out of 100 with 39 ratings