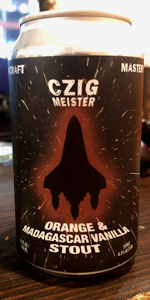 The Orange & Madagascar Vanilla Stout pours a very dark brown, so dark as to be almost black, with a very thin head that disappears almost immediately.

The aroma is of dark roasted malt, with hints of coffee and chocolate. Notably absent are any hint of orange or vanilla.

The flavour is rich with dark roast malt, accompanied with hints of coffee and chocolate. The orange and vanilla advertised on the can? They didn't bother to show up.

But it's not branded and sold as just a regular stout, it's branded and sold as an Orange and Madagascar Vanilla stout, and it has not a hint of orange or vanilla aroma or flavour. To make sure it wasn't just me, I had another person try it whose taste buds and ability to pick out flavours far exceed mine. At first I gave it to her with no comment, and she came back with the same exact aroma and flavour profile I picked up - dark roasted malt, with hints of coffee and chocolate. I then told her it was an orange and vanilla stout, she tried it again, and she couldn't find any hint of orange or vanilla either.

And this is where I feel like we're getting into false advertising territory, because someone at Czig Meister must have tried this and realized that, tasty as it is, there's not a hint of orange or vanilla to it. And yet they went on to brand and sell it as an Orange & Madagascar Vanilla stout, which seems flat out deceptive. I'm sure there's some small amount of orange and vanilla in there - maybe a single orange peel and vanilla bean for every 100 gallons - but just because it can be measured in parts per million does not mean that it's okay to market a stout with flavours it doesn't have.

So on the one hand, this is possibly the best beer from Czig Meister that I have tried (and I've tried quite a few, and almost all have been really disappointing). On the other, it is deceptive in its branding and marketing and anyone expecting actual orange and vanilla flavour is likely to be disappointed.