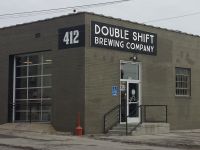 Casual and low key, friendly atmosphere, and friendly folks behind the bar.

Homemade juicy brews on tap, they were tasty and I could def see giving more than a few of them a try.

Worth a visit if you find yourself in this area.

Double Shift is a very small brewery adjacent to the parking lot for Grinders. We stopped in soon after they opened on a Sunday afternoon. They do not serve food aside from some light snacks but you can bring your own. Beer selection was decent although the board behind the bar wasn’t up-to-date. In fact, they were out of the first two beers I tried to order. I did eventually find one that was on tap, as did my wife. We tried 4 different beers, all of which were excellent, especially the Turkish coffee stout. Prices seemed a little high given that the pours were no more than 12 oz. Service was efficient. In a neighborhood that has a high concentration of breweries, Double Shift is a good choice.

This was stop #5 of 5 on a weekend Beer and BBQ trip to KC. Visited on a Sunday evening during trivia night. Everyone was playing trivia, not much focus on beer. Basically a full house. We tried two or three beers while the trivia was going on. Cool vibe overall, and I wouldn't mind going back and trying a few more of their beers.

Quaint stand alone grey building in the middle of an ever-evolving district of Kansas City, Missouri. Interior is simple, open, and airy. Open HVAC and pipings, with masonry walls, concrete floors, and earthy-stained wood surfaces for the tables and bar. A "U" shaped beer provides a lot of surface area to interact with bar staff with a half dozen picnic benches to sit and socialize. Opposite facing couches with a coffee table in one corner provide a comfy lounge area. The doors to the brewery are wide and open, providing an intimate look into the heart of the brewery. Staff is friendly and attentive, with large black boards updated with the current tap list, bottles, and growlers. Tap list is all Double Shift offering, with a cross-sectional cut presenting styles of all sorts.

Noticed this place on my way out of Border Brewing - it's literally right next door. Just a 5 bbl brewing system in this tiny nano brewery. But the vibe was much friendlier and local than Border. I ordered a flt. from the smiling barkeep and was happy with each of the 4, 3oz pours. I went for the Run Around Rye (which was a very pleasant German Roggenbier and much better than the rye IPA slop that I just had next door). The blond coffee smelled of fresh roasted coffee beans, with a flavor that seemed to meld vanilla and coffee with just the right malt background. Literally Can't Even just blew me away - a 9.8% Belgian strong that has a devilishly deceptive apple crisp sweetness. Capped off my evening with the Don't call me Radio IPA (7.7%) which was an interesting IPA, but not my favorite. Nice tropical fruit nose with a star fruit sweetness to balance a big hop presence.

i was quite surprised to find myself enjoying all the beers here so much. i had heard some less favorable feedback from some trusted locals about these guys, but i was really stoked on pretty much everything i had here, and their space is cozy and quaint and fun, right in the crossroads area, plenty of parking, not too loud or huge inside, very personal, wonderful service at the bar, and a surprisingly large selection of beers, they had a ton of stuff pouring across a lot of styles and even had some bottled selections as well. i loved the oatmeal stout, and the grisette was also fantastic, but the saisons they did were excellent as well. the hoppy beer was a little less remarkable, but i even liked that too. they must be working hard in this brew house to keep so many beers on, especially for the quality. i was really impressed from the top to the bottom of their beer list, and got through probably half of them. it was fun to hang here, good crowd for a week night, and i will definitely be back. actually some of the better local beer i have had in kansas city was in here this week...

Building is not impressive on the outside, but inside it looks great. I love the open garage door that opens toward Border Brewing Co. The 2 beers that I tried were solid. Growler fill prices are a tad high. The cheapest were $16. Most were $18 or more. Bartender was helpful. Very generous with her taster pours. Good selection including a couple limited brews. I would love to bar hop from Border to Double Shift to Torn Label.

Located in the Crossroads arts district near other new breweries Torn Label and Border Brewing. Across the street from Grinders and almost next door to Border. Small lot and nondescript building with a black and white sign with bold capital lettering.

Inside the building has a nice open layout, bar in the back center and low tables around the front. Brewery is visible behind the bar, stacks of barrels, a 5bbl system and 10bbl fermenter space. A wall on the side was painted with black chalkboard paint, with unique elaborate chalk drawings from floor to ceiling.

The bartender was quick and friendly, as well as informative about the brewery and their beers. Beer selection was fairly unique and ambitious, including an excellent dry-hopped dark sour ale, Roggenbier, English Mild, Black IPA, and several others. Quality was good across the board.

Overall a great experience, and I'd return to check out their ambitious seasonal-focused selection.

2017: Stopped back in shortly after their 2nd anniversary. It happened to be "first fridays" in the gallery district, but wasn't super crowded. I tried ordering a round of tasters as the beers were all new to me, but they said they don't sell them on first friday nights after 6:45 or something completely arbitrary. So instead, they make you buy full beers. We left after a round, oh well. We would've bought more beers if it weren't for the goofy "no tasters" policy.