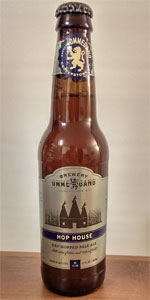 Not that tasty, but well crafted.
**

Brought back from my trip to NYC. Pours a hazy golden orange with good carbonation and a fluffy white head. Aroma is lightly malty, hoppy, yeasty, with a touch of fruit. Taste is moderately sweet, Belgian yeast spicy, herb, citrus, some flower, straw, light hay with a long medium to fairly strong bitter finish.

Undated bottle into pint glass. Pours a cloudy light amber with a thick, off-white head. Initial impression is lemon and pine resin. A little bitterness, but just enough to remind you that this is dry hopped. Medium mouthfeel, solid carbonation. Fairly smooth citrus finish.
I'm not a fan of the Belgian style, but this was pretty good.

Like all Ommegang beers, Hop House looks picture-perfect. Its clear, golden body has a fetching sheen and bleach white, perfectly molded head that sits stoically at about a finger's thickness. Bubbles are lively throughout and refuse to tire. Mind you, keep the sediment out if you want to fully enjoy the appearance.

When a classic Belgian-style producer releases a pale ale with "hop" in the name, one thing comes to mind immediately: Orval. I'll admit I opened this bottle secretly hoping for something along those lines, the closer to that iconic ale the better. Well, it may not have the Brett but it sure is dry-hopped...

And we're not talking just the old-school Styrian Goldings here. Bravo and Columbus - both more flamboyantly fruity American varietals - are used as well. The resulting aroma has underlying elements of earth, whole-leaf florals and spice, but also a markedly tropical, almost bubblegum fruitiness.

Hops have their way on the palate too. Its 54 IBU are surprisingly formidable for a beer with such a pleasant, inviting air. That blend of pale malts is broad enough to hold its own but doesn't interfere with the earthy, spicy bitterness; to get the finish just scoop fresh hop cones into your mouth like popcorn.

The grassy, floral hop notes more traditional in a Belgian Pale stand up surprisingly well to the more zestful lemon peel impressions imparted by the US varietals. Blindfolded, I'd have a tough time telling you if this was made in the States or in Belgium (and that's typically the case with this brewer).

Ommegang has got to be one of the most consistent and high quality microbreweries over the last 10+ years. They are responsible for some of the early and highest rated Belgian-style ales made Stateside and their newer brands, like Hop House, are equally fantastic. They're still at the top of their game.

T: lemon up front; a little pine in the middle; back to tart lemon at the finish; mild bitterness in the aftertaste;

O: although I didn't particularly like the combination, the aroma is quite complex; nice refreshing flavor; great feel;

Not bad drinkable light Belgian characteristics with some decent malt detectably present but a lighter hop presence that I expected that's a little more floral.

Tasted in a Rastal Teku glass from a 12 oz bottle on December 11, 2015. Look is hazy deep orange with a thick head and lingering lacing. Smell is grapefruit, citrus, pine, yeast and malt notes. Taste is orange, grapefruit, yeast and dry hop favors. Feel is medium in body with slightly bitter and dry finish.

Ommegang never seems to disappoint. This is yet another winner.

It opens overflowing with foam. I had warmed it just a tad and that may have disturbed the residents. It's a lovely yellow with nice head. The aroma is a strong hops and yeast mix. Very nice.

The taste is dry and bitter for sure, but with loads of yeast flavor in there too, keeping it from being one of those one dimensional, boring ales. This one works.

Highly recommended for a Belgian pale that is nicely over the top and American.

Bought a single bottle from Beers of the World on 11/14/15. Served cool (not cold) in a Duvel tulip.

Overall: another fine ale by Ommegang

hazy pour, fluffy head of foam, great retention and lacing. lots of sediment hanging out towards the bottom of my glass.

nose is yeasty with floral notes. super drinkable and crisp - nice balance between hoppy flavors and malt backbone. no single taste is overwhelming, but the flavors blend together to create a pleasant and refreshing flavor. would definitely buy this beer again!

Poured into pint glass, big creamy head that stayed until the beer was done
L- was very hazy as result of the yeast but i really liked the peachy color
S- although its called hop house the aroma was more yeasty
T- I really enjoyed the taste as it is a belgian ale, which had an orangey flavor with the noticeable yeast and yet the subtle notes of the hops wreally rounded out this great beer
F- the feel was creamy, not so carbonated but definitely not flat
Overall very good offering from Ommegang this is the first time i've had on of their beer but i'll be back after this one

Best by June 2016. 12oz bottle poured into a tulip. Pours a hazy golden with a fluffy chunky eggshell white head that doesn't fall leaving great retention and sticky lacing. Some sediment/floaties. The aromas are very floral. Fresh flowers. Some grass. Yeast is there, but allows the hop aromas to be present. Some pine in the mix as well. The flavors are very earthy. Strong sharp bitterness with a solid malt backbone. Fresh pine needles. More fresh grass. Some orange and grapefruit notes. The hops shine. Alcohol goes unnoticed. Mouthfeel is great. It's on the lighter side of medium-bodied with active carbonation. It's creamy too. Very sharp and crisp.

This is a nice Belgian pale ale. They allow the hops to shine. It's rare to see Ommegang work with hops, but they weren't shy with them in this case. Good stuff.

A: Very hazy, deep orange color. Great head and lacing almost makes up for the cloudiness.

O: Good beer. Nothing special though. Good orange flavor and bite but lacking flavor that late hop additions would add.

Crisp and fresh aroma, hoppy with pine and citrus, and with a sweet touch of yeast behind.

This is an unattractive but very nice brew. It isn't particularly novel or unique, but it's enjoyable.

Murky with sediment, I laughed at the instruction to pour gently, swirled and dumped the full contents of the bottle into the glass. I refuse to kneel before the iron fist of bottle instruction tyranny because I am a dawn rider at the gates of oblivion and I am not a serf.

It's Ommegang: Belgian style, bottle-conditioned beer but this time with a healthy and satisfying dose of hops, but nothing overpowering; enough that you can taste it, but nothing approaching an IPA or anything like that.

Those who find other Ommegang beers too sweet for their palate should give this a shot.

Clear (SRM 6) golden amber with a huge, sudsy white head. After a long while the head turns rocky but never dissipates as it leaves sticky patches of lace on a Cisco Fisheye pint glass.

The aroma is similar to soapy lemon zest with yeasty notes.

The beginning is quite bitter and long. Grapefruit and grass open from the middle and last into a lingering finish. Warmth brings out sweet doughy flavors.

The medium body is well carbonated with a satin texture. Astringency works well with this dry pale ale.

Hop House is okay late on a hot summer day.

A- slow pour produces a huge foamy and frothy head that fills half of the glass and retains long after the pour, eventually leaving some sticky lacing as it finally settles, golden in color with an orange hue

S- spicy Belgian yeast gives some earthy notes with a hint of pepper spicy, fruity hops give aromas of melon & orange, powdery close with a bit of grass

Huge head from a reasonably gentle pour from a bottle. The frothy head recedes slowly and in a rocky fashion. Cloudy, orange-amber color. A chunky, blanketing lace covers the entire side of the glass.

Soft floral hop aroma with a bit of paler malt in the background. No Belgian yeast like I'm used to.

Very much a blend of an American and Belgian pale ales--neither dominating the other. Here, I can detect the distinctive Belgian style yeast. The hop is far stronger and more biting than the smell suggests. This is a hop heavy beer--not well balanced. Long, lingering hop laden aftertaste. A bit watery with a proper carbonation.

L: Pours hazy gold under a pillowy persistent 3” light cream colored foam collar. Even after a few minutes a large mound of foam floats on top.
S: Spicy earthiness with traces of yeast and some light, slightly over ripe fruit. Definite grassiness as it warms up with traces of mint.
T: Complex layered flavors. Soft mildly biscuit malt, orange, pear, tropical and stone fruit, hints of pepper with a bitter hop accent on the finish. A little light sweetness that is well balanced by the hop additions and there is an assertive but not overbearing bitter accent on the finish. Finishes dry.
F: Very creamy, medium body, medium carbonation, very soft.
O: I like this as well if not better than any of the import Belgian Pale Ales I have had.

Really well made beer, like everything from Ommegang. Here goes:

A: Clear yellow-orange. Has a ton of carbonation, a great head, and leaves significant lacing. Good.

T: Good hops, but the yeast is significantly muted. I get some bready yeast, but it's just too faint. However, the hops make the beer taste quite good (they follow the nose).

O: A solid beer. Wish it had more of that yeasty Belgian taste, but it's still good.

A: This poured a nearly opaque dark gold with fluffy white head.
S: It smelled like citrus and grassy hops, with some minerals and spicy Belgian yeast.
T: It tasted like minerals and grassy hops, with some citrus zest and spicy Belgian yeast. It had a clean bitter aftertaste.
M: It was oily with moderate carbonation. Nice full body.
D: This was not the best Belgian pale ale. The scent and taste were below average, although the body was decent. The finish was a little harsh, so it wasn't that easy to drink. Not recommended.

Why did it take so long for me to try this beer? Belgian yeast drive the profile, which is quite nice, and hops dominate a very dry finish lingering with fruity esters. Must be a fresh bottle, as I'm getting very minimal malt backbone, and I like it. Belgian Pale Ale all the way. Rated to style, I'm hard pressed to think of a better American-made iteration (admittedly there aren't too many well distributed versions to compare against). But even outside of style, this is quite nice. Very nice in fact. Shame on me for not trying this earlier.

Mouth feel: smooth effervescence with a heaviness on the tongue

Overall: My least favorite of the Ommegang stable.

Hop House from Brewery Ommegang
Beer rating: 85 out of 100 with 807 ratings