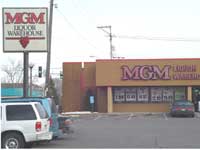 View: Place Reviews
Reviews: 6 | Ratings: 7 | Log in to view all ratings and sort

In a strip mall by larpenter and lexington ave . Nice long cooler of chilled brew , with a very nice selection of 4pks and 6-packs all the local brew is here as are the regional, surly ,bent paddle,indeed - odells bells,stone, they carry and receive limited brews, have a nice selection of Imports, really have a quite good selection, prices are 5-10 % higher than alot of stores. Service on this visit was very good the gal running the floor new about beer and was helpful, not a destination store but one if in the area you will find something to buy.

This MGM has moved across the street to the Roseville Plaza site once occupied by Cellars. As a result they have a less cluttered look than previously, despite having a larger selection of crafts and micros than before. The selection of bombers, both on the shelf and refrigerated is excellent and the chilled 4 & 6 packs take up more space in the coolers than neighboring Rainbow Liquors has coolers. BMC still fills a large space ('cause that's where the bulk of sales are, after all) but the amount devoted to crafts and high quality imports is impressive.

Most of the store space is used for wine and spirits, but the strides they've made in beer is greatly appreciated.

Service is good with a couple of sales people being reasonably knowledgeable about craft brewing, but there's room for improvement.

As many have indicated cellars is right across the street.

I walked in and immediatly noticed how large the wine selection is, and they had an employee serving free samples of wine at the entrance. They have a make your own 6er for $8.99, in the rack it was mainly brews like miller chill, bud light lime, shoktop, corona light, but in the coller (still part of the make your own 6er) they had a few interesting brews bigfoot ('08, no vintages) and summit. Prices seem pretty fair, I wasnt going in for anything rare, or costly just a tailgating brew. There were a lot of macros, and they dominated the cooler. The beer aisle contained some local micros as well as a few other decent brews

Ok, so while on my shopping spree this weekend, checked this place out just for shits and giggles. That said, why the hell would you go here when Cellars is literally across the street. The focus here, as in every other MGM, is macros. Micros and imports get their token space, but you won't find anything special. Selections is meh, you know, typical locals you'd see in any other liquer store. Service is typical of MGM, and really.... if you're in the area, just go to Cellars. I hate to sound like their cheerleader, but MGM has nothing on them.

The Vadnais Heights store does not have a good selection of micro brews currently. I also have observed that their selection has varied over the years but has been very limited in the last year. My nod is still towards D&L which is only 1-2 miles away and has 2-3 times the section.

As a liquor stone, MGM is fine but not if you need a beer fix. How can they only have one Sierra Nevada? It is not clear why this is but the other review indicates that the managers have a lot of discretion in what the order.

MGM is a chain liquor store that has stores in just about every suburb. They carry huge stocks of macro with some micros that vary from store to store. The one in Champlin, has single bottles and good micro and foreign sixers. Lots of Mexican, eastern European, and mixed countries. Only a few belgiums. I' ve bought some skunky beer from some locations. They don't rotate enough in some stores. The MGM on White Bear Ave off Hwy 94 on the east side of St. Paul recently added a new lane and full shelf of micros, which shocked the hell out of me. Last time I was there I got stuck buying Bass when I was hoping for Bell's. Now they carry it. They even had some Third Coast Old Ale at $14. Some Pyramid, Goose Island, and even beefed up some of the imports. Most locations carry your average micros and imports with anywhere from a few choices of micro to a small selection.

I have to toot my own horn a little cuz I'm solely responsible for getting some beers to grow at the one in Vadnias Heights, about a year and a half ago I stopped in hoping to purchase anything out of the ordinary. They had nothing to my liking, so I decided to just leave, as I was leaving a manager asked, "Is there something I can help you with?"
I stopped and and blantly said "Ya, your place didn't have what I was wanting." He then asked, "Well what exactly are you looking for?" I said, " Well, nothing you have here, thats for sure."
I carried on a conversation for some time explaining how the MGM in Champiln and the MGM only about 2 miles down the road in downtown White Bear had much better selections. He actual called up the Champlin store and had them fax over their order and inventory sheets. When they came through, he was a little embarrassed. I told him what I thought would be good to stock and he took my advise, he even ordered a 12 pak of Sleeman's Cream Ale for me. Later that week when he called me to let me know my Sleeman's had come in, I stopped in and he had my 12 pak as well as 4 cases of it, along with Sierra Nevada Pale, Moose Drool, some Pioneer brews from Black River Falls, Wis. and some Belhaven F/Scotland. That manager has since moved on and the store now carries some of the beers I actually look for and want. They've even gone as far as having some single bottles, but they still could use some more selection. Maybe I'll have to walk out empty handed again and see what happens.